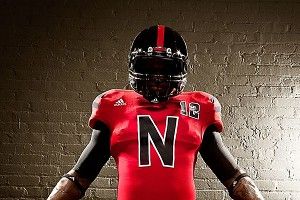 Aggie No. 2: If the goal was to look exactly like Mississippi State, our new SEC West rival, then, yeah, we hit a home run.

2. Nebraska reveals to the world its new “alternate” uniforms. In college football, an alternate uniform, by definition, is something else you can sell at the co-op. The new Nebraska jerseys are a menacing red and black. They have an enormous “N” splashed across the chest. If you gave Taylor Martinez a lance, he could compete at Medieval Times.

Of course, the craze for alternate uniforms, black uniforms, gray uniforms, and anthracite uniforms isn’t limited to the Aggies and Huskers. College football is in the midst of a decades-long identity crisis. In that giant “N” and those strangely familiar A&M uniforms, you can make out some interesting things about the sport.

The offseason has turned into a continuous “reveal.” There was Arkansas’s white helmet. The latest from Swoosh University. Maryland’s umpteenth bizarro uniform; last year’s version was introduced, the school noted, “in a 30-minute fashion show complete with a runway and a crowd of approximately 150 spectators.” While college football is by definition a collection of warring kingdoms, the uniform craze has the whiff of a shoe-company master plan. Message-board people note that the new A&M, Mississippi State, and Nebraska unis — all by Adidas — appear to have been photographed in front of the same brick wall.

You could argue that the teams that tinker with their unis are the teams that have never won anything. But there was a Texas retro helmet, a Notre Dame shamrock helmet, and — well, that doesn’t work

What’s happening? I have two thoughts. First, for years an important part of college football’s marketing strategy has been the sport’s unhipness. Teams are selling recruits on old stadiums, old coaches, old unis. Texas’s Johnathan Gray will play in nearly the same uniform that Earl Campbell did. At Nebraska, there’s an unbroken line of “N” helmets that stretches from T-Magic to Tommie Frazier.

New uniforms are a tacit admission by the schools that, when trying to win over 17-year-olds, retro has its limits. Especially if, as in Nebraska’s case, you haven’t won a conference championship since 1999.

The second thing that’s happening is that college teams are trying to make more cash. When I call the Nebraska Bookstore, on Q Street in Lincoln, they say they’re telling very pumped customers that they won’t have the new jerseys until a few weeks before the Wisconsin game. But to sweat the money grab is to give in to the NCAA’s bullshit notion of “amateurism.” College football should make billions. I’d just like it if some of the billions were shared with the players.

I’ve got James Brown and Vince Young jerseys hanging in my closet right now (the Young jersey is currently cursed). Not a dime of the money I spent on them went to JB or VY, who are, of course, the reasons I bought the jerseys. The real crisis of college football uniforms is not about forsaking tradition. It’s about going to your stud quarterback and taking another shirt off his back.

Filed Under: Bryan Curtis, Texas, Texas A&M, The U