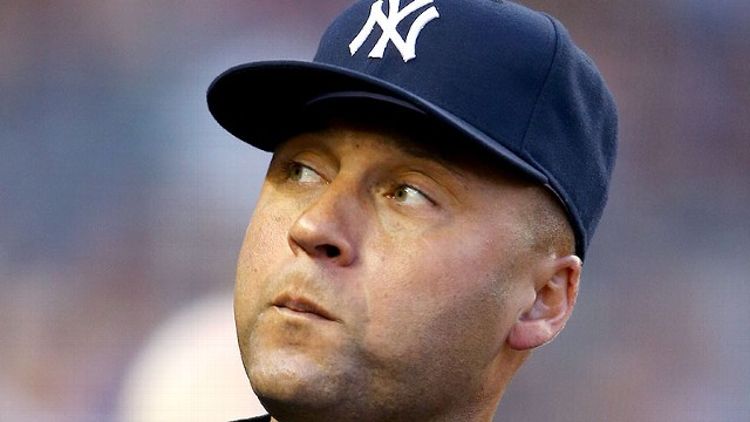 The baseball season is a long and lonely road. To preserve his sanity, Yankees shortstop Derek Jeter keeps a diary. These are excerpts from the Captain’s private journal.

This story about the suspensions that are allegedly coming down from the commissioner’s office is all anyone wants to talk about. You get so tired of the subject that you hate to even bring it up, but the names are out there, and people are even talking about it in the clubhouse. You want to believe that everyone on your team is clean, because that’s the only way you know how to play. To do it any differently is an insult to every True Yankee who has come before you. When you’re first called up from the minors, you’re taken to a private room by all the True Yankees on the roster, and your sacred responsibility to the pinstripes is explained to you. There are votive candles bearing all the retired Yankee numbers, and blessed shards of bats that delivered game-winning World Series hits, and a pair of magic sweatbands that had to be cut off Reggie Jackson after the 1978 season because he didn’t want to give them back. You’re joining a culture of professionalism, of perfectionism, of winningism. You have to be up to the task. You need to be told what’s expected of you. So we tell you.

Unless we’re on the road. Then we skip all that and just tell the kids not to embarrass us out there. If they’re still on the team by the next homestand they get the ritual, depending on the availability of the sweatbands. We have a lot of rituals — sometimes scheduling is an issue. But in most cases you eventually get your ceremony, and the message is delivered.

And that message is this: It’s special to be a Yankee. Don’t screw it up. Especially by cheating.

We don’t need the commissioner’s office to police us.

We have the sweatbands.

The team’s up in Seattle to begin a West Coast road trip, and I’m back in Tampa to continue rehab. With Alex. The media’s been all over him, but he’s been trying to go about his business, taking his BP and ignoring anything that’s not baseball. You really have to respect that. He could easily walk out to the bank of cameras watching him from behind the outfield fence and do what he’s done in the past, which is start taking questions, get mesmerized by the sound of his own voice, and then not stop talking until he’s discussed that recurring nightmare he had in the fifth grade about the wild boar that lived in his closet and came out to eat his big toes whenever he fell asleep. It’s not easy for an oversharer to pass up the chance to explain why he sometimes wakes up with missing toes and hobbles around with a phantom limp. There’s progress there. It’s encouraging.

A-Rod finds me in the cafeteria.

“It’s a strawberry and chocolate swirl. Your favorite.”

“This can be your new favorite. It’s twice as delicious, Jetes.”

“Hey, Jetes. You maybe want to take some fro-yo out to the reporters?”

“They look hungry. I bet they’d like some fro-yo.”

“I promise not to talk to them. Just fro-yo.”

Twenty minutes later, I find him sitting on the ground in front of a dozen reporters in the outfield grass. He’s got his shoes off and is pointing at his big toes, pantomiming boar tusks with his fingers.

All the reporters are eating fro-yo.

With strawberry and chocolate swirls.

You can’t take anything for granted in this game. On paper, you look at a matchup like today’s, and you see the New York Yankees versus the Seattle Mariners, and Andy Pettitte versus Joe Saunders, and you might jump to the conclusion that it’s going to be an easy win for one of those teams. But that’s why they don’t play the games on paper, they play them in pitcher-friendly ballparks in cities where the soccer team outdraws the MLB team. Anything can happen.

You’re happy those amazing milestones happened, but there was no guarantee that they would, even though they did.

Baseball’s a great sport that way.

When we started the season, Chris Stewart wasn’t the starting catcher, David Phelps wasn’t in the starting rotation, and Reid Brignac wasn’t the starting shortstop. But here we are, in early June, with a team that wasn’t necessarily the one we’d all envisioned in spring training, but it’s still a team that will battle you until the final out, even if you’re starting Felix Hernandez in his home ballpark. Phelps will go pitch-for-pitch with your ace. Stewart will get the winning hit against your bullpen. And maybe Brignac won’t do anything of note, because the shortstop position is doomed until it’s filled by a Captain, but he’s out there trying his best for a team that refuses to quit.

You can’t help but be proud of these guys, even though they’ll probably lose their jobs to returning regulars soon. It takes a special kind of person to be a temporary hero. It’s important that we recognize that from time to time.

The road has been long, and frustrating, and hasn’t always played out the way I’d have liked it to.

You wish that they were wet swings, that the balls were hit several feet to the right and to the left.

But it is what it is.

This is a deliberate process. We can’t afford any more setbacks, any more injuries. Not when we’re getting so close.

We’re even taking my visualizations slower this time. No World Series parade down the Canyon of Heroes. I’m only allowed to close my eyes and imagine myself in the locker room after clinching the ALDS, confiscating all the champagne bottles and swimming goggles, reminding everybody that we haven’t accomplished anything yet.

Maybe I pushed it a bit there. I may have let the guys in my mind-clubhouse spray a little Moët around.

The fro-yo is delicious.

We Went There: The Spurs Rain on the Cool, Ineffective Heat

NBA Finals Shootaround: This Must Be the Place