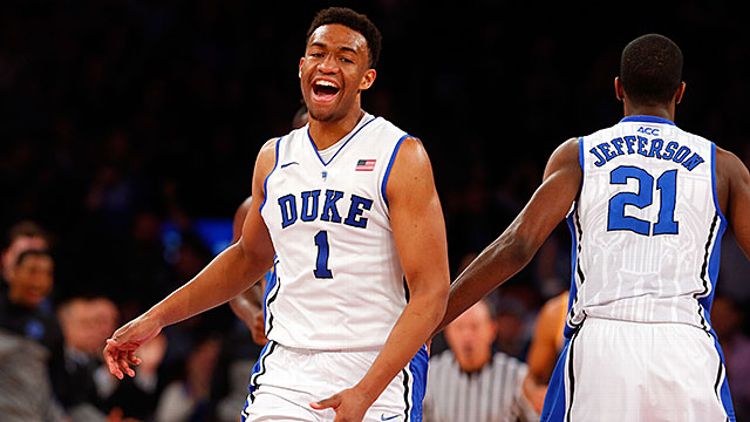 There have been a lot of Duke teams that reach ACC play either undefeated or with one loss in the nonconference schedule. This year, though, the story has been turned on its head; despite the excellence of Jabari Parker, the best freshman in the nation, and the addition of transfer Rodney Hood, a dynamic offensive weapon, the team just hasn’t looked very good. Losses to Kansas and Arizona would have made for a disappointing November on their own, but bizarrely close home games against East Carolina and Vermont (a then-1-4 team that actually had a chance to win the game on the final possession) made it clear that the Blue Devils had serious, and perhaps fatal, flaws.

But it also raised a question: Could this be the rare Duke team that “peaks late”? There was no denying the talent on the floor, but as November came to an end, the whole was far less than the sum of its parts. The optimistic take was that 2013-14 might be the reverse of the usual story — in which Duke plays well out of the gates, but falls in the NCAA tournament to a team peaking late in the season — and after a solid home win against Michigan and last night’s brilliant second-half performance in a victory over UCLA, it’s starting to feel like the worst days might be over. Duke is playing its best basketball of the season, and it’s showing signs that maybe it can solve a few critical issues and surge back into the top five nationally.

1. Can Quinn Cook play with consistency at point guard?
As great as Parker and Cook have been, the overall efficiency of the offense still hinges on Cook. And the word “inconsistent” has followed him like a doe-eyed lover almost since he arrived in Durham two years ago. He’s often spectacular, and a Quinn Cook highlight reel would make you think he’s one of the nation’s best point guards. He’s not — his defense has been very bad, for starters — but he has the potential to be really, really good. He played his best game of the season against Michigan, with 24 points and nine assists to just two turnovers, and despite an off night shooting yesterday, he came away with a career-high eight steals against one of the country’s best offensive teams and was a steady hand at point while playing all 40 minutes.

2. Can Duke function against a zone defense?
The popularity of the zone is surging this year because of the new emphasis on actually calling fouls, and Duke has seen a lot of zone due to the simple fact that it’s really hard to guard Parker, Hood, or Cook man-to-man. And after looking confused for parts of the first half by UCLA’s zone, the Blue Devils came out in the second half and annihilated Steve Alford’s defense. In their best possessions, they ran the offense through the high post and barely dribbled, whipping the ball from foul line to perimeter until they found an open shot. It was beautiful to watch. With players like Parker and Hood, the instinct is to set them loose on the drive or isolate them in the post, rather than use them as interchangeable parts in a motion passing offense. But even John Beilein’s patented 1-3-1 didn’t faze Duke in the Michigan game, and it looks like the zone demons might be exorcised for good. That’s going to be hugely important if it hopes to compete with Syracuse (the best team in the country by a good sight, in my book) for an ACC title.

Last year he was one of the best freshmen in the ACC, and this year he’s been riding the bench and trying not to sulk in public. It’s one of those secretive situations where Coach K deflects and pleads ignorance when pressed by reporters, but certain quotes (Tyler Thornton: “As a man, he has to step up and accept what he needs to do. We need him. That’s all I can really say about that.”) hint that there’s something wrong. A DNP against Michigan seemed like an emphatic message from coach to player, and though everybody’s been saying the diplomatic thing, speculation about Sulaimon’s approach to the season, and even his attitude, seems warranted. But last night was a huge step in the right direction; he played 18 minutes, hit two 3s, dished out four assists, grabbed five boards. Afterward, Sulaimon told the media that “it feels like a big weight is off my shoulders,” which is a quote Duke fans have been waiting to hear all season. Duke needs him. If he emerges as a fourth offensive threat, there won’t be a team in the nation that can stop Duke from scoring.

4. What about offense from the interior?
OK, at this point we’ve probably determined there won’t be a traditional “post presence” inside. It certainly won’t be Josh Hairston, and the fact that he’s starting over Amile Jefferson tells us all we need to know about the sophomore’s prospects. But the real question is this: Does Duke need an old-school big man? The answer, I think, is no. Parker can post up, Jefferson can get his easy buckets when the attention is elsewhere, and, on the whole, the offense should be good enough to hide this weakness. The one real problem is that Duke has been predictably poor on the offensive glass, resulting in fewer second chances. It’s the one area where it has been consistently weak against every good team (and most of the bad ones), including last night. But with the overall strength of the offense, this is a deficiency Coach K can live with.

5. [Long, nervous inhale.] What about the defense?
Maybe it was inevitable that Duke would eventually find its flow on offense, figuring out the zone and pinpointing exactly how to use Parker and Hood. Defense, though, will always be this team’s Achilles’ heel. The problem is that the guys on the perimeter — Cook, Sulaimon, and especially sharpshooter Andre Dawkins — aren’t quick enough to stay in front of the country’s best guards. That’s not something that can be fixed; they just aren’t physically capable. Inside, Hairston still hasn’t psychologically recovered from the rule changes, and you can see the distress every time he plants himself under a rising shooter and doesn’t get the charge call. Jefferson isn’t strong enough to contain big post players like Perry Ellis or the Arizona bigs, and while putting Parker on the best big man is OK as a quick fix, it’s not his strength, and only makes him susceptible to foul trouble.

As of now, it looks like this will be Coach K’s second-worst defensive team (by efficiency) in at least a decade. (The worst was the Austin Rivers team of 2011-12, and that ended in C.J. McCollum torching the Blue Devils in a first-round loss to Lehigh.) But the UCLA and Michigan games gave at least an indication that the situation might not be hopeless. Far from it, even; Duke became the first team all year to hold Jordan Adams in check, and after the Bruins cooled down from beyond the arc, Alford’s men scored just 26 second-half points. There are small, team-oriented things Duke can do to disguise the physical shortcomings: limiting transition baskets (excellent against UCLA), initiating full-court pressure (Cook, for all his weaknesses in the half-court set, can run all day), and even throwing in the rare zone look to mix things up.

After an awful start, the defense looked very, very good against Michigan and UCLA. Granted, the “inside presence” of those teams consisted of a flabby Mitch McGary and a pair of twins who would rather shoot 3s than step inside the paint, but good signs are good signs. And for the first time all year, an unusual Duke team is headed toward its plateau.