Conversations With an Idiot: Is Tiger Woods ‘Back’? 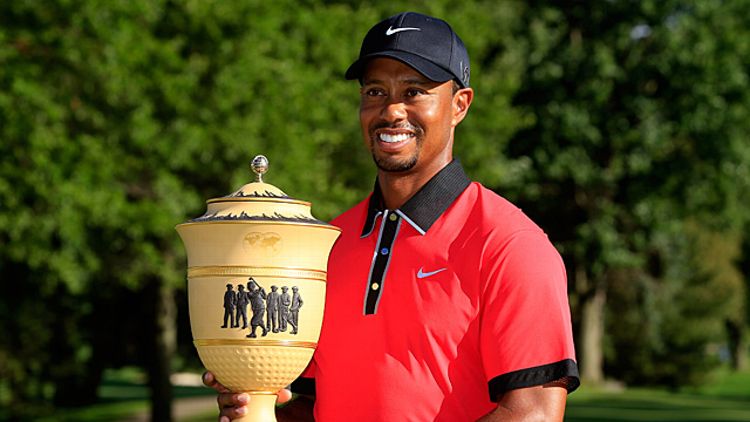 You may have heard that Tiger Woods shot a 61 on Friday at the Bridgestone Invitational in Akron, setting a course record and tying his best professional round ever. He went on to win the tournament by seven strokes over Henrik Stenson and Keegan Bradley, and will be the odds-on favorite to end his major drought with a victory at this week’s PGA Championship. The Bridgestone win marked the latest success in an excellent year; by almost every measure, he’s been the world’s best golfer in 2013.

And yet throughout the sports media landscape, one question persists: Is he back?

This morning I was lucky enough to make a guest appearance on the fake podcast Conversations With an Idiot. We debated the hot-button issue, and the transcript is below. Please enjoy.

Conversations With an Idiot

Idiot: Welcome, everybody! This is Episode no. 346 of Conversations With an Idiot. I’m your host, an idiot, and boy, do we have a great show lined up for you. If you’re just joining us, we’re talking golf with Grantland.org’s Shaun Ryan. We are told he’s a writer of some sort, and the question on the table is one that’s burning up the airwaves: Is Tiger Woods back? Shaun, your take!

Me: It’s Shane. But I’m glad you asked, because the question of whether Tiger Woods is “back” is patently ridiculous. The fact is, he’s the best golfer in the world. If people are still debating whether he’s returned to form after the fallout from the Thanksgiving 2009 incident with Elin Nordegren, it’s either because they’re only paying attention to the four major tournaments, or they’re comparing him to an earlier, younger version of himself that dominated the sport in a way we’ve never seen before and may never see again. In both cases, the treatment is very unfair.

Idiot: So if I’m reading you correctly, you’re saying he lost his killer edge after the bad business with Elin?

Me: [Pause.] No, that’s not what I’m saying at all. I’m saying that by any reasonable standard, he’s the best golfer in the world.

Idiot: Do you have stats to back that up?

Me: Absolutely. Let’s start with the most obvious: He’s no. 1 in the world rankings. When you think about it, this whole conversation could stop right there.

Idiot: Sure, if you trust the “world rankings.” But isn’t that a bit of a popularity contest?

Me: What? No, it’s based on a mathematical formula that weighs how each golfer finishes in the events he plays, with more points awarded for prominent events. It’s not a perfect system — Rory McIlroy is currently third, which is far from accurate considering his recent struggles, but when you see someone leading by almost four points per tournament over second place, you can be sure that he’s dominated the game for the past year.

Idiot: But Shaun, some might respond to that by saying, “OK, sure, but golf isn’t a game of numbers. Golf is a game of hitting the ball in the hole. Don’t confuse me with numbers. Just whack it in the cup.”

Me: Who would say that?

Me: I don’t think Phil Mickelson would say that “golf isn’t a game of numbers.”

Idiot: What if I told you we have audio of him saying those exact words?

Idiot: What if I told you we did?

Me: I guess I would say you’re lying?

Idiot: And you’d be right. Dead on. Shaun Ryan, Grantland.org. Winning us over with his instincts and guile.

Me: Again, my name is Shane. And it’s Grantland.com, not Grantland.org. But look, I don’t need to rely on world rankings. Here are some other rock-solid pieces of evidence that Tiger is the best. He’s no. 1 on the PGA Tour money list this year. And the crazy thing is, he’s only played 11 events, while most of the others near the top have played 16 to 20. How is that possible? Because he’s won five events, while nobody else on the PGA or European Tour has won more than two. He’s completely lapping the field. And he just shot the best round of his career and set a course record, so his form has never been better.

Idiot: But what about the majors?

Me: Fair question. He finished fourth at the Masters, 32nd at the U.S. Open, and sixth at the British Open. Most professional golfers would kill for those results. And it’s crazy to expect a golfer to win every single weekend. Sometimes not winning majors is just a coincidence; a likely one, when you think of the probability of actually beating every other competitor in a huge, talented field.

Idiot: But hasn’t he been unreliable on the weekends? Hasn’t he looked shaky?

Me: Look, I’m about to throw you a bone here, but I want you to promise you’re not going to do that thing where you take a minor concession and declare victory in the debate, because otherwise that undermines some very basic premises of decency, renders the entire dialogue meaningless, and contributes to a culture where debates can only be “won” by a testosterone-fueled idiot who bleats the loudest and thinks his refusal to concede even small points is a sign of rhetorical brilliance. Can you do that?

Idiot: I don’t appreciate you using my name as a slur, but yes, I promise.

Me: OK. Fine. Here’s what I’ll say about the majors. On one hand, he’s playing so well and so consistently that I firmly believe it’s only a matter of time before he wins his 15th major. On the other hand, it’s true that he hasn’t looked great on the weekends in the past couple years. And though the golf season is long, and it’s pretty annoying when people judge a golfer solely on how he plays in four tournaments, I can sort of understand why a golfer’s legacy is determined by his major results. That’s the sport’s biggest stage, and it’s not totally insane that we expect the best players to excel when the spotlight is brightest. However! I would hasten to point out that Tiger did win the Players Championship this year, outdueling Sergio Garcia and the rest of the field in what everyone considers “the fifth major.” So it’s not like he can’t win a big tournament.

Idiot: There you have it. Shaun Ryan, Grantland.org, saying Tiger Woods isn’t back until he wins a major.

Idiot: Hey, those are your words, not mine! You’re on the record!

Me: AND IT’S GRANTLAND.COM. WE’RE NOT A NONPROFIT! QUIT BEING SO IDIOTIC!

Idiot: Another slur, Mr. Ryan. That’s two strikes. And you’re being defensive. Losers are defensive. Are you losing this argument?

Me: Fine, we’ll do this your way: Tiger Woods is back, he’s been back, he’s the best golfer in the world, and anyone who disagrees is an id— is a total moron who can’t help simplifying things to such a shortsighted degree that he essentially becomes a drooling, imbecilic half-wit.

Me: Almost definitely. He’s 37 years old, and there’s no reason he can’t keep playing top-quality golf throughout his 40s. That gives him 13 years to win five majors, and if his production is only half what we’ve seen from him in the previous 13 years, he’ll break the record with room to spare. And think about this: He now has 79 PGA Tour wins, second only to Sam Snead’s 82. If you want a record he’ll definitely demolish by the time his career is finished, look no further.

Idiot: But Shaun, let’s stop tap-dancing around the elephant in the room: Is it true that Tiger Woods can’t win anymore because he’s a former sex addict who can’t get his fix?

Me: [Hyperventilating with rage.]

Idiot: Should we just say, “Go ahead Tiger, have sex with whoever you want!” Is it worth it, so we can have the great golf back?

Me: [Twitching and suppressing a hate-scream.]

Idiot: Fantastic! Well, that’s about all the time we have today. A big thanks to our guest, Shaun Ryan. He’s no Bill Simmons, and I doubt very much we’ll ever hear his name again, but I’ll say one thing: He’s no Tiger Woods apologist. He hit him right where it hurts. Any last thoughts?

Me: They should ban Tiger Woods from all athletics for being a big, sex-crazed loser.

Idiot: We agree on that. Until next time, I’m an idiot. Good-bye.

About Last Weekend: All A-Rod Everything