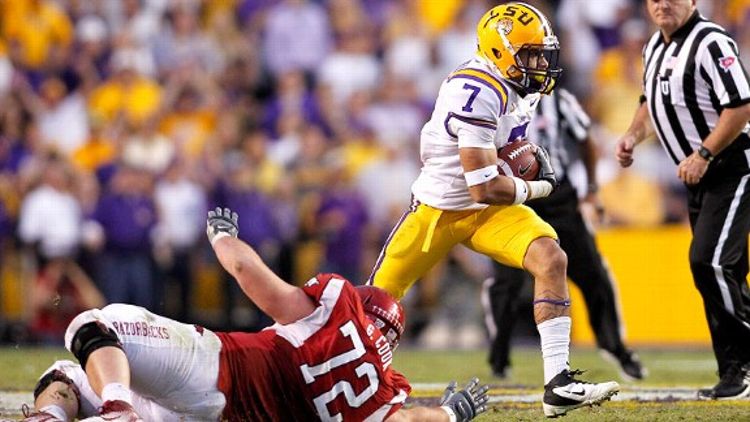 After the frenetic highs of Week 12, Rivalry Week was a slow coming-down party. In 16 games involving ranked teams, there wasn’t a single upset — at least by the rankings. Most of the games weren’t even close. The rich got richer, the poor got poorer, and several avenues of escape were cut off.

The BCS title game is all but decided, and it looks like an SEC rematch.

With a 45-17 win over no. 3 Arkansas, top-ranked LSU won the SEC West and, for all intents and purposes, a place in the championship game. Arkansas actually took a 14-0 lead in this one, but then, just when fans of BCS chaos allowed themselves a smidgen of hope, the Honey Badger struck.

There’s no greater nickname in college football this year, and honestly, there might not be a more valuable defensive player. Tyrann Mathieu’s 92-yard return tied the game, and on the next possession, after Arkansas crossed into LSU territory, he forced a fumble that a teammate recovered. The Tigers drove for a touchdown, and the massacre was on. Just for good measure, Mathieu forced another fumble in the fourth quarter and recovered it himself.

For the full story on the Honey Badger nickname, watch this video and then this one. (Among the highlights of the latter: Mathieu thinks about forcing turnovers when he’s out on dates.) The moniker is so perfect because it’s so accurate. Mathieu is fearless, sure, but he’s also canny and preternaturally gifted at stealing the ball. No player has stepped up in big moments quite like Mathieu. He should win every defensive award in the books, including best defensive lineman (Mathieu plays cornerback and safety). Fine — maybe that’s going too far. But then again, the Honey Badger takes what it wants.

In other news, no. 2 Alabama all but secured its chance at revenge with a predictably easy 42-14 win over no. 24 Auburn. Trent Richardson made a strong late push for the Heisman with 203 yards on 27 carries. He shouldn’t win the award, mind you, but since the voters and the media decided at the beginning of the year that either he or Stanford quarterback Andrew Luck would triumph in New York regardless of what happened throughout the season, I suppose this is a nice finish. Sorry, do I sound bitter? I’ve covered this before, but I can’t get over the absurdity of the Heisman Trophy race. It keeps me up at night, tossing and turning, and it doesn’t help my relationship that I sometimes scream “Case!” in my sleep.

Anyway, Alabama has secured its ranking going into the last week, and the only team that can maybe, possibly, potentially sneak ahead is Oklahoma State. If the Cowboys beat the Oklahoma Sooners next Saturday, there’s a faint chance that they could leapfrog Alabama for second place. Unfortunately for Oklahoma State, that would depend on a lot of voters having anti-rematch feelings and switching their rankings around. At the moment, though, it seems like the general sentiment is pro-rematch, and it would have to be quite the emphatic victory for Oklahoma State to move anywhere higher than third. So emphatic that the Sooners would probably have to score negative points, somehow, and that’s never been done before. Oklahoma’s loss to Baylor last week almost killed any chance for the Cowboys; if this was a match-up of one-loss teams, the winner would probably sneak past Alabama. Unfortunately, a victory for either side means much less now.

We begin, unlike our actual country, out west.

No. 10 Oregon bounced back from last weekend’s loss against USC to annihilate Oregon State in the “Civil War” 49-21. For Civil War comparison’s sake, this would be like if South Carolina decided to secede in 1860, then immediately got scared and was like, “Hey, we were joking! We were joking, guys!” And then the rest of the South lost heart and nothing ever happened.

The win clinched the Pac-12 North for the Ducks, and they’ll now face the winner of the South, UCLA, in the Pac-12 championship. To go back to Civil War comparisons, that would sort of be like if the North only had to fight, somehow, against Rhode Island. Because folks, UCLA is bad. The 6-6 Bruins finished their regular season Saturday with a tidy 50-0 loss to USC, but made the conference title game when Utah lost a tight one to Colorado. The USC Trojans, of course, would be set to face Oregon as the best team from the South if they hadn’t committed all those violations. To which I ask the NCAA: isn’t the idea of punishing them good enough? Isn’t it enough that we were willing to punish them? Isn’t actually going through with the punishment just a form of cruelty?

We just want a good game, NCAA! To hell with your principles! Accountability is a thing of the past! This is America!

The Oklahoma-Oklahoma State game wins the conference and gets the bid. Oklahoma looked like they might give it away on Saturday, but recovered in time to beat Iowa State handily and force the showdown in Stillwater.

Michigan State locked up the Legends Division last week, and finished strong with a 31-17 win over Northwestern. In the Leaders Division, Wisconsin finally caught Penn State, walloping the Nittany Lions 45-7 to earn a berth to the Big 10 Championship. Which is great news for fans who wanted to see the Badgers and Spartans meet again after the Hail Mary game. Montee Ball was the hero for Wisconsin, scoring four touchdowns (he leads the country with 29) and gaining 156 yards. More on Mr. Ball later, but enjoy his final touchdown:

We covered LSU, and the Tigers will be meeting no. 13 Georgia next weekend in the SEC title game. The Bulldogs clinched before this weekend, but put an exclamation point on the season with a 31-17 win against Georgia Tech. Aaron Murray threw four touchdowns, and the Yellow Jackets showed their usual inability to play from behind. I guess we should give credit to Georgia Tech coach Paul Johnson for sticking with a system that usually gets him eight wins per year, but man, the passing game was truly embarrassing. The option offense is so self-limiting that it essentially precludes a team from ever winning a national title, but that seems to be a bargain Georgia Tech is willing to accept. So, kudos, I suppose.

Virginia Tech squashed the upstart Cavaliers from Virginia 38-0 to secure the Coastal Division. Again, this was a game that followed what the rankings suggested rather than what upset lovers like myself might hope. David Wilson ran for 153 yards, falling just shy of the 1,600-yard mark for the season. Even with the win, the Hokies saw their slim chances of playing for the national title fade away when they failed to move ahead of Stanford — much less close the gap with Alabama — in Sunday’s BCS rankings.

Part of the problem is no. 17 Clemson. After starting off gangbusters, and proving their legitimacy with a 23-3 win in Blacksburg, the Tigers have fallen on hard times. It started four weeks ago with a loss to Georgia Tech, continued with a near-death experience against Wake Forest, got critical with a puzzling blowout loss to unranked NC State, and reached new depths this weekend in a 34-13 loss to no. 12 South Carolina. The Tigers are limping to the finish, and the bad news for Virginia Tech is that they secured the Atlantic Division before the cascade began. Even if the Hokies win next weekend, it’s unlikely that even a blowout would impress anyone enough to move them ahead of Alabama.

What the hell is happening in the Big East, you ask? I’m not even sure. All I know is that Louisville beat South Florida to finish at 5-2, and West Virginia and Cincinnati each won to move to 4-2. There’s no conference championship here, so if the Mountaineers and Bearcats both win next week, we’ll have a three-way tie. In that case, West Virginia would get the BCS berth by virtue of having the highest BCS ranking. If only Cincinnati wins next weekend, they Bearcats get the BCS bowl because they beat Louisville head-to-head. If only West Virginia wins, the BCS bowl goes to Louisville, which beat the Mountaineers earlier this season. You with me?

Yessir. Case Keenum and his band of high-flying misfits routed Tulsa 48-16 on Friday night to finish the regular season at 12-0. Tulsa had been 7-0 in C-USA, but that didn’t matter a bit. Houston will face 10-2 Southern Miss in the conference championship next weekend, and if they win, they’ll earn a BCS berth. So, that being said, let’s look at the potential BCS lineup. We’ll assume LSU wins the SEC title game and Alabama gets one at-large bid to face the Tigers in the national title. We’ll also assume Houston wins next weekend to get the automatic independent qualifier spot, and Oregon kills UCLA to win the Pac-12.

That leaves two final at-large bids. Stanford will get one, but it’s still all but impossible to predict who the BCS will shine its favor on for the other.

What I’m hoping is that Houston gets to play the Big 12 winner for a true test. What will probably happen is that the Cougars will have to face someone like Louisville, win easily, and never know the extent of their potential.

No more nonsense. We’re down to the bitter end, and there’s only room for a top 5.

5. Montee Ball, Wisconsin. Ball leads the nation with 29 touchdowns, and after a 156-yard performance against Penn State, he’s now second in total rushing yards with 1,622. He’s also among the best in yards per carry, averaging 6.5. I thought LaMichael James might make a late push, but his injury kept him out of the picture. Ball finishes the regular season with the best numbers of any running back in America.

4. Trent Richardson, Alabama. And yet, you have to give a guy like Richardson credit for racking up numbers that are almost as good in the toughest conference in the country. He’s fourth nationally in rushing yards, third in touchdowns, and he averages 6.0 yards per carry. His excellent 203-yard finish against Auburn is enough for me. Richardson, truly, is the best running back in the country.

3. The Honey Badger, LSU. He’s second in the country in forced fumbles, with six, and the only defensive back in the top 15. He’s third in fumbles recovered, seventh in punt return average (with one touchdown), two additional touchdowns, 67 tackles, two interceptions, and he’s an excellent coverage cornerback to boot. Add in his clutch proclivities, and Mathieu is the best defender in the country and a worthy candidate for the Heisman.

2. Case Keenum, Houston. Keenum just continues to play the beautiful game from his spot in the pocket. He’s in the top three in every major quarterbacking category, and he leads the country with 4,726 yards. After next weekend, he’ll break the 5,000 yards and put a lot of career records out of reach. On top of that, he’s led Houston to a school-record 12 wins in a single season, and is one win away from a BCS bowl game.

1. Robert Griffin III, Baylor. In just one half of action in Baylor’s win against Texas Tech, Griffin threw for 106 yards and a touchdown and rushed for 62 yards and two more scores. He’s now a close second behind Russell Wilson in quarterback rating, the national leader in yards per attempt with 10.6, sixth in completion percentage, and within striking distance of breaking the 4,000-yard mark next weekend. When you consider that he has 612 yards and seven touchdowns rushing, putting him second nationally in total offense, and almost single-handedly led Baylor to its first ever win over Oklahoma, this is, without a doubt, the best player in college football.

Championship Week is all that stands between us and bowl season. Check in Thursday for the preview.