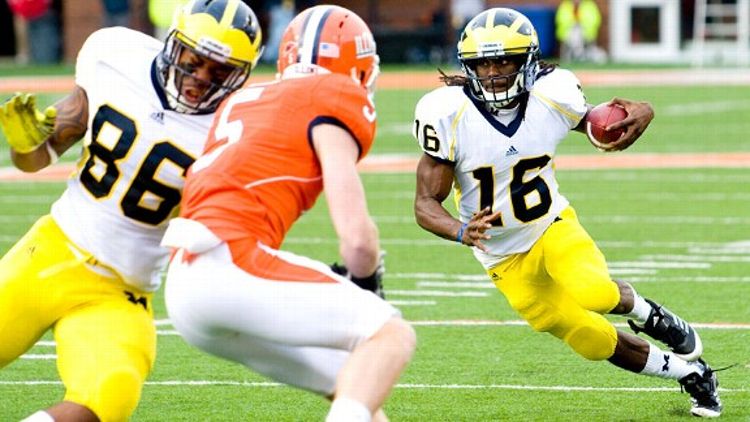 Let’s dive right into the scrum.

Here’s what happened the last time these two teams met:


Not a bad precedent, right?

The Big Ten is primed for an interesting finish, and the result of this game will dictate whether there’s any drama in the Legends Division going into the final weekend. Here’s how it stands now, with the winner moving forward to face Penn State or (more likely) Wisconsin in the Big Ten championship game:

Michigan State plays host to Indiana this weekend, a game the Spartans are almost sure to win. That’s bad news for Nebraska, which has to win its final two games and hope that Michigan State will lose at Northwestern in Week 13. If the two teams finish tied in the standings, Nebraska owns the tiebreaker with a head-to-head win. But it’s really bad news for Michigan, which lost to the Spartans and is reduced to hoping that lowly Indiana (0-6 in the Big Ten) pulls off an unthinkable upset.

If Nebraska wins, though, the outlook is a bit brighter. The Huskers will finish at home against Iowa, and it’s not unreasonable to think Northwestern could beat the Spartans.

But first, they’ve got to survive the Big House. The Cornhuskers might be the most confusing team in the FBS this year. Things made sense back when they lost to Wisconsin, but became confusing when they reeled off wins against Ohio State and Michigan State. It stood to reason that they were improving, but that theory was thrown on its head with a loss to Northwestern. Last week’s close win at Penn State made a little more sense, but not much.

Here’s what we do know:

If you read between the lines, we’re on the path to another Big Ten war of attrition, with few points and many punts. But Michigan is rarely deprived of touchdowns, even in losing efforts, and the fact that the Wolverines are at home and boasting a slightly superior run defense should be enough. They’re favored by 3.5, but if Robinson can cut down on the costly interceptions, the final margin should be wider.

Other Clashes of the Ranked

No. 5 Oklahoma at no. 22 Baylor. Blowout. Sorry, Baylor. Oklahoma should score about 60 points on the Bears defense and creep one step closer to a backdoor BCS championship berth. I don’t see any way out for Baylor. On the other hand, if Bears QB Robert Griffin III engineers a miracle, he should immediately leap into the top two in Heisman consideration.

No. 13 Kansas State at no. 23 Texas. This should be a great, great game. Texas has shown a lot of spirit by rising back into the Top 25 after looking poor against Oklahoma and Oklahoma State, but last week’s 17-5 loss to Missouri (5 is such an embarrassing total, isn’t it? I’d always rather have 3) was a setback. The Longhorns are at home against Kansas State, a team with one of the game’s gutsiest players in quarterback Collin Klein. Last week, Kirk Herbstreit said he was so impressed with Klein in the Wildcats’ losing effort at Oklahoma State, he found the team bus and asked to see Klein so he could congratulate him. The Wildcats defense leaves a lot to be desired, though, which is why Texas is favored by more than a touchdown. Whatever happens, this game will define the season for each team. Another loss by either, and the final evaluation goes from “good” to “just OK.”

We’re close to the end, and the BCS muddle is starting to clarify. Let’s go conference by conference and take a look at which teams are in position for one of the six automatic bids.

ACC — Clemson secured its spot in the ACC championship game by beating Wake Forest and locking up the Atlantic Division last weekend. In the Coastal Division, Virginia Tech can seal the deal with a Thursday-night win over North Carolina and a Virginia loss to Florida State. If Tech and Clemson play, it would be a rematch of the Tigers’ 24-3 23-3 road victory in Blacksburg.

Big East — The most crowded conference, by far, features four teams at 3-2. Cincinnati is ahead of them all at 3-1, but another Bearcats loss (this week at Rutgers, for instance) would throw the entire standings into disarray. There’s no conference title game here, so for my own sanity I’m going to wait at least another week before trying to parse the tiebreaker.

Big Ten — Covered above. Michigan State is in the driver’s seat in the Legends Division, and Wisconsin and Penn State each control their own destiny in the Leaders Division. A rematch of the Hail Mary game in the conference championship looks like a good bet.

SEC — Georgia just needs to beat Kentucky at home to secure the East, an easy task, and LSU is in control of the West. Arkansas could force a three-way tie by beating the Tigers, in which case whoever won the head-to-head meeting among the two highest teams by the BCS ranking would represent the West in the title game. If that team, whether it’s LSU, Alabama, or Arkansas, can beat Georgia, you have to imagine they’d land in the BCS national championship.

Pac-12 — Oregon needs just one win against USC or Oregon State to clinch a berth in the conference’s first title game. In the South, USC leads in the standings but is barred from playing in the conference championship. That leaves Arizona State and UCLA vying for position. Both teams are at 4-3, but give UCLA a slight edge for winning the head-to-head battle 29-28 when ASU missed a 46-yard kick as time expired. Then again, the Bruins have the more difficult schedule, finishing two weeks from now against USC.

We’re now 8-16 straight up and 11-13 against the spread. I say “we” in the hopes that I can make you think the games are being chosen by some conglomerate, rather than just one idiot. Anyway, my goal is to reach the point where the picks are equally as viable as a coin flip. Until then, you might want to look away.

1. Mississippi State at no. 6 Arkansas. State stayed with Alabama for a half last week, and has been on the wrong side of luck all season. Arkansas is a vulnerable team, with close wins against Vanderbilt and Ole Miss. I wish the game were in Mississippi, but I still like the snakebit Bulldogs to beat the 13-point spread and have a crack at an outright win.

2. No. 13 Kansas State at no. 22 Texas. Already covered this one. No reason for Texas to be favored by a touchdown here. The oddsmakers made the same mistake last week when K-State beat A&M.

3. Virginia at no. 25 Florida State. This is more of a spread pick, because I don’t think Virginia will lose by 17. The Cavaliers are coming off three straight wins, and are a tougher team than most believe. Admittedly, Florida State has looked excellent over the past five weeks, and I do think the Seminoles will win the game. But it’s going to be close.

Here are the scores of Toledo’s past two games:

Against those same two teams, here’s how Central Michigan fared:

What I’m trying to say is that this might be the first game in college football history to top the 500-point barrier.

Here’s a great one for Iowa State fans as they contemplate the idea of upsetting Oklahoma State:

Here are the best games, not previously mentioned, from the six major conferences.

ACC — North Carolina at no. 8 Virginia Tech. Yeah, OK, I mentioned this one already. But it’s a slow week in the ACC, and Carolina is actually capable of an upset here if Bryn Renner can play an efficient game at QB. It’s not likely to happen, but the Hokies can’t afford a slip-up in the Coastal Division.

Big East — Cincinnati at Rutgers. I’m serious, things are going to get real weird in the Big East if Rutgers wins this one. In other news, Rutgers wide receiver Mohamed Sanu could reach 100 catches and 1,000 yards on the season with a decent game.

Big Ten — No. 21 Penn State at Ohio State. This might be the last chance for Penn State to win a game, but are the Nittany Lions up for a challenging road test at this point? I’ve mentioned before that Ohio State’s Luke Fickell has my vote for coach of the year, but a hiccup last week against Purdue casts some doubt on whether the Buckeyes should really be favored by a touchdown.

Pac-12 — USC at no. 4 Oregon. At this point, I think there are two teams that can beat Oregon, and those two teams are Alabama and LSU. But USC is roughly equivalent to Stanford, and with just two losses, the Trojans are only unranked because they’re ineligible for the BCS rankings — in the AP poll, they’re no. 18. On the road, though, expect another Ducks blowout.

SEC — Georgia Southern at no. 3 Alabama. This is the week when a lot of SEC teams, including Bama, are playing FCS teams (formerly known as Division I-AA … are we still in the window where I have to say that?). Georgia Southern, at 9-1, is ranked second in the country, and games like these are usually fun to watch. Remember Appalachian State against Michigan? Granted, Alabama is way too good to lose, but it’ll be fun to see how long the underdogs can flirt with an upset.

Think of this week as an appetizer, and next week as a frantic main course. I don’t know about you, but I like my main courses frantic.