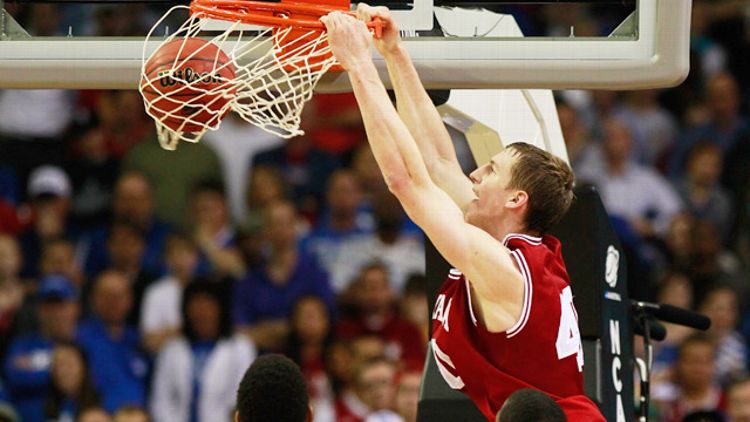 Yesterday we looked at the Third Team and the All-Stoppers squad, and now it’s time for the best of the best. Tomorrow is opening day in college hoops, and I’ll be previewing the top 10 games. For now, here are my 10 top players for 2012-13. All stats come from ESPN and Ken Pomeroy.

Note: I will be using the Harrison Barnes Rule — no freshmen on the All-American teams. Surely one or more of them will be worthy by the end of the year, but I shall not be Barnes-ed! Also, I covered the freshmen here, too.

The Dish: Canaan became a mid-major darling last year when Murray State raced out to a 23-0 start and finished with a 28-1 regular-season record. Canaan brings a natural scoring ability to the point guard position, and his 45.6 percent mark from beyond the arc makes him extremely difficult to guard. Defenders can’t give him space, but they can’t get too close or his quick first step will leave them flat-footed. There aren’t many players who could lead a conference in 3-pointers made and finish third in assists, but Canaan has a special blend of talents that makes him one of the more fascinating guards in the country. He’s won three regular-season OVC championships with the Racers, and he’ll try to accomplish the rare feat of going a perfect 4-for-4. He could also become one of the few mid-major players to win an NCAA game in three different seasons (he beat Vanderbilt his freshman year, and Colorado State last season).

The Dish: As I wrote yesterday, Snaer is best known for his dramatic game-ending 3s from last season, and rightly so, but his ability as a lock-down perimeter defender often goes unmentioned. He’s the most intense competitor in the ACC, and that quality serves him well in the mano-a-mano defensive duels that define many Florida State games. Leonard Hamilton is a defense-first coach, and Snaer is his cornerstone. I’m already salivating over the December 5 game against Florida, when you have to imagine Snaer will draw the free-shooting Kenny Boynton. From today, Snaer is my pick to win ACC Player of the Year, and the only question is whether the effort he’ll have to expend on both sides of the ball, especially without Bernard James patrolling the paint, could lead to fatigue by March. Even if that happens, Snaer should make a killing in the ACC, especially considering the lack of elite talent at the wing spot on traditional powerhouses like Duke and North Carolina.

Five Possible Nicknames: As I said in yesterday’s post, you cannot improve upon the name “Snaer” for a defensive specialist.

The Dish: Yeah, yeah, McCollum scored 30 points and led Lehigh to an upset over Duke in the first round last year. WE ALL KNOW IT HAPPENED. But as much as I’d like to relegate McCollum to the fluky scrap heap of NCAA history, I have to admit he’s a star. He has a knack for getting to the rim and scoring despite the fact that he’s just an average shooter, but what makes him really valuable is his passing and defensive skill. Despite not playing the point, McCollum finished fifth in the Patriot League in assists, and he’s become one of the best ball thieves in the country, finishing 15th in steal rate last year. He also spent the summer playing against the likes of Kevin Durant and Chris Paul and LeBron James at their skill academies, and he got high marks at each. That can’t hurt.

The Dish: I was on the verge of putting Leslie on the first team, but then I realized that it would be extremely idiotic to keep Doug McDermott off (spoiler alert? Oops?). But Leslie is being so persistently underrated this year that I wanted to make a conscious effort to overrate him. I’m not saying he’s without weakness; there have always been questions about his attitude and work ethic, and advanced stats show that he’s declined in categories like offensive rebounding. But his improvements in most other areas have overshadowed minor quibbles, and he’s one of many State players who seem to be thriving under new coach Mark Gottfried. Leslie was a beast at the end of the season, averaging 18 points and nine rebounds over the last 11 games, and I fully expect him to hit the ground running this season. For those of you outside ACC country who only know Leslie peripherally, get ready to be surprised.

The Dish: I loved Mbakwe’s vow to repay his scholarship if Minnesota fails to make the tournament this year. We need more vows and guarantees in sports, regardless of the outcome. Stop being so cautious, athletes! Here’s the problem: Mbakwe is a very troubled guy. He was arrested for felony battery in 2009 for allegedly assaulting a 22-year-old woman, violated a restraining order in January 2011 by contacting an ex-girlfriend on Facebook, violated his parole this in September after being arrested for DUI, and apparently suffers from depression. He hasn’t made things easy on himself, and an ACL tear that cost him almost all of last season certainly heightened the difficulty. But he’s healthy and eligible, and his strength and athletic ability remain intact. Only further injuries or another self-destructive tailspin can keep him from fulfilling his promise with a prolific year.

Five Possible Nicknames: M’Block Way, The Walkway (if he travels a lot), Gopher the Glory (this also works if he buys a racehorse), Wherever Trevor, The Guaran-T

The Dish: Burke is my vote for the most exciting point guard in the country, just ahead of Lorenzo Brown, and he’ll be one of the few redeeming elements of what should be a slow, fairly boring Michigan team. As mentioned in last week’s previews, his duels against Aaron Craft will be required viewing (Craft got the better of him last season). If Michigan plans to duplicate last year’s shared Big Ten title against OSU and a very strong Indiana team, it starts and ends with the Trey.

Five Possible Nicknames: The Youth Movement, Wolver-threen, Ash Trey (he burns you), Burke De Soleil, Martha Burk (I’m not sure when we’d ever use this one, but let’s keep it in mind)

The Dish: By virtue of playing out west in a small conference, it was easy for Franklin to fly under the radar even while winning the MW player of the year in 2011-12. This season, though, the Aztecs start against Syracuse, ON A BOAT, in the marquee game of opening weekend. It will be our first chance to see whether Franklin deserves accolades like this one, and whether he’ll compete for even bigger honors. It might even be fortunate that he’ll have to open against a zone defense, considering his skill at slashing and attacking the offensive glass. Steve Fisher will have his Aztecs playing fast, exciting basketball, and as part of one of the best backcourts in the country, Franklin should thrive.

The Dish: As a preseason AP All-American, Thomas will be counted on to provide a reliable scoring option for an OSU team that lost Jared Sullinger and William Buford. Part of his success will depend on his teammates; if Aaron Craft and Lenzelle Smith Jr. can become credible scorers, Thomas will have more freedom to find his flow within the offense. If not, he could be looking at a long year of Big Ten defenses playing rough and smothering him with unwanted focus. Even in the latter case, though, Thomas is athletic and skilled enough to find his spots. Getting to the rim won’t be a problem, and if he can improve his outside shooting, he’ll rise higher than last season’s top 50 offensive rating.

The Dish: As the best college player to ever come out of Ames, Iowa (sorry, I had to do it), McDermott is back with his inexorable scoring prowess. He’s not always the most spectacular player to watch, and he’s one of those guys who doesn’t look like an elite basketball star (he famously dunked just once all of last season), but there’s something in his blood that makes him great. It goes deeper than strength and work ethic, two areas in which he excels, into the realm of American fantasy. There’s a slow, preternatural Midwestern grace to his game, like a Hoosiers daydream come to life. He can score absolutely anywhere — in the post, mid-range, beyond the arc, on the drive, with both hands — which makes him extremely difficult to guard. He makes more than he misses; last season, he had the sixth-best effective field goal percentage in the country. His defense is technically sound, if not superlative, and he’s one of those players who can always be counted on to make a smart decision. For a guy who touches the ball on almost every possession, his turnover rate of 14.6 was extremely low in 2011-12. In short, he can do anything, and he can do it with a workmanlike flair that manages to look plodding and dynamic at once. And yes, oxymorons are inherent to his game. Remember Jimmer Fever from a few years ago? McDermott Fever is about to go viral, and he’s ready for the spotlight.

The Dish: There’s very little to say about Cody Zeller beyond the fact that he’s a perfect college center. Like his brother Tyler, he combines an extremely soft touch with an uncanny floor presence. No matter which way he’s facing, or where he stands on the court, he knows exactly where the basket is and exactly what he has to do to score. Tom Crean called him the “most fundamentally sound” player he’d ever seen at age 18, and despite his relatively skinny frame, he knows how to attack the glass. As you’d expect, he’s also one of the better post passers in college, and every one of his teammates, no matter their skill set, benefits from the attention he draws inside. He answered every question about his strength and stamina last season, and he holds his own on defense against the endless bruisers of the Big Ten. The words “reliable” and “consistent” feel too pedestrian for a player of his caliber, but then again, they fit. Zeller is as close as you can get to a sure thing.