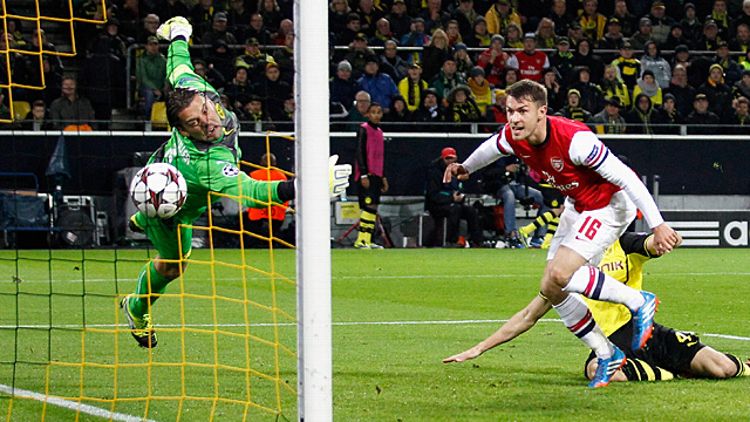 Mike L. Goodman: It’s not that Manchester United didn’t create much on the road against a mediocre Real Sociedad team that fans should find alarming. It’s the fact that manager David Moyes seems pretty OK with it. After the game, his comments focused not on the lack of creativity, but rather on their lack of clinical finishing. He wasn’t upset they didn’t find more shots to take, he was upset they didn’t score the ones they did have.

They only mustered seven shots against a Real Sociedad team that has conceded 13.7 shots per game in La Liga (according to whoscored.com). That’s an anemic offensive output, and one you’d like to see Moyes be critical of after the fact. Yes, United did have a couple of bad misses (including a nice “ball don’t lie” moment from the penalty spot after Ashley Young was apparently fouled by gravity), but the entire point of focusing on chance creation is that scoring goals, even from advantageous positions, is hard.

It’s also worth noting how much better United became at building chances when Young came on for Javier Hernandez, allowing Shinji Kagawa to move into his favored central role, with Young out wide. After the substitution, United created more chances in the last half-hour than they had in the entire game until that point.

That’s a huge plus for United. Kagawa is a gifted playmaker, but he’s not remotely a winger, and continuing to play him there does nobody any good. But if Moyes doesn’t feel the team needs to create more chances, it won’t feel the benefit from Kagawa’s central playmaking ability. United’s offensive aspirations are simply not high enough at the moment to allow their personnel to flourish.

Spike Friedman: Arsenal midfielder Aaron Ramsey has been, by any metric, unsustainably hot this year. In Colin Trainor’s write up on Arsenal’s early-season performance in the Premier League, he used a weighted Monte Carlo simulation to find that, given the location and number of shots Ramsey has taken this year, one would expect him to score six or more goals from those attempts less than 1 percent of the time. A sane person would take this information and head to a bookmaker before laying the under on Ramsey’s goals scored for the rest of the season. However, no one who has watched Ramsey play this year qualifies as sane anymore.

Some context: Ramsey’s goal, scored in the 62nd minute of his team’s 1-0 win over Borussia Dortmund, came on Arsenal’s first shot of the match. Dortmund already had 11 shots. This was Ramsey’s first headed shot on target in any competition this season. Dortmund had scored an average of more than three goals a game at home this season, and had won all those matches.

Some more context: Arsenal won this match anyway, taking pole position in the Group of Death. Numbers are merely a construct. Ramsey is the best footballer the game has ever seen. Arsenal are destined to win the treble on the back of his greatness.

I Love It When a Plan Comes Together

Goodman: Real Madrid remain a work in progress. That’s a stunning thing to say about a team that will comfortably win its Champions League group, but they sit a ghastly third in La Liga, a full five points behind crosstown rival Atletico (who, incidentally, also seem poised to waltz through their group). New manager Carlo Ancelotti has yet to settle on a preferred starting XI, and an injury-hobbled Gareth Bale has yet to find his form.

But there are moments when you can see how it’s supposed to look. Their second goal against Juventus was a thing of beauty. A great transitional ball from Marcelo to Cristiano Ronaldo was followed by a smart decoy run by the much-maligned Karim Benzema, which opened up acres of space for Bale to cut in on his left cannon. It’s a brilliant move that, after only two passes, transitioned from defense to attack in the blink of an eye, dragged both central defenders well out of position, and left Bale one-on-one with a left back in a central location.

Good luck with that.

Goodman: After the fourth match day of the Champions League group stages, it appears that most of Europe’s biggest teams are sitting pretty to move through to the next round. Manchester United control their own destiny in Group A, with Bayer Leverkusen sitting relatively comfortable in second. Paris Saint-Germain have yet to lose and are coasting through Group C, and Benfica will have likely have to beat them when PSG comes to Portugal on the last match day in order to catch Greek side Olympiacos. Group D is all but over with Bayern Munich and Manchester City coasting through.

Chelsea took control of Group E with their win over Schalke, with the Germans still holding an edge over FC Basel for the second spot. Atletico Madrid has already clinched out of a relatively weak Group G, staking their claim as a legitimate trophy contender with their excellent play under Diego Simeone, and leaving Zenit and Porto to battle for the final spot. And Barcelona locked up Group H, leaving former powers Celtic, Milan, and Ajax to scrap for the second spot.

The drama rests in Groups B and F. In Group B, Juventus, who were widely picked as the best non–Real Madrid team in the group, have put themselves in a particularly difficult position. They sit dead last in the group on three points. But since Real Madrid have been so dominant, the teams above Juventus — Galatasaray and FC Copenhagen — have only four points apiece. Assuming Juventus hold serve and beat Copenhagen at home, then all eyes will be on the match in Istanbul, when the Italian club likely needs to draw the Turkish team to move through. It’s possible that match will be the only one that realistically matters for Groups A-D on the final match day.

Finally, in Group F, things have gotten very interesting. As expected, Marseille have removed themselves from the conversation, losing all four of their matches. This has left Napoli and Arsenal tied atop the group with nine points, with Dortmund sitting on six. Arsenal play Marseille with a chance to clinch advancement, and Napoli head to the Westfalstadion in the biggest match of the fifth match day. If the Germans and North Londoners both hold serve, then the final match day will send Arsenal to Naples, with Arsenal having already clinched advancement but needing a result to ensure they are atop the group, and Dortmund will head to France needing to equal Napoli’s result against Arsenal with an eye toward running up the score to ensure they hold the goal-differential tiebreaker. If things break differently on the fifth match day, however, Dortmund, last season’s runner-up, could be eliminated, or all three contenders could be equal in points heading into Week 6.