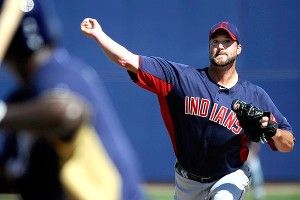 Thanks to a promising pitching staff full of ground-ball machines and potentially weak competition in the AL Central, the Indians could be an intriguing sleeper team this season.

The man in charge of building that team, Chris Antonetti, has lofty goals for the Tribe. We sat down with the Indians’ general manager at the team’s spring training home of Goodyear, Arizona, to discuss his band of worm killers, the virtues of great defense, a potential rebound season for Shin-Soo Choo, and more.

What are your expectations for this season?

Our expectations are to play in the postseason, our goal is to win the World Series. I know people thought we were nuts when we said that last season, but we don’t really pay much attention to outside expectations.

So aside from just natural optimism, does your model say that there’s enough talent here to make the postseason?

Absolutely. Like any team, we need certain things to go our way. We need the players we’re counting on to be healthy and to play to their potential. We have a group of guys who are young. Depending on how you measure it, we had the third-youngest team in baseball last year …

… and you got Derek Lowe this offseason, so now you’re the third-oldest …

[Laughs.] Right, exactly. But that group of guys as a collective unit are either in their prime or approaching their prime. And generally that’s a good thing. You’re betting on whether guys will meet expectations, exceed expectations, or fall below. Trying to predict which individual players will fit into each of those categories is really hard to do. But when you look at it as a collective group, that’s the right group of guys to bet on, because they’re in that right spot in their career where collectively they should be better this year than they were last year.

That’s if we can stay even a little healthier. We lost all our starting outfielders last year at different points of the season in [Michael] Brantley, [Shin-Soo] Choo, and Grady [Sizemore]. We lost our second baseman in [Jason] Kipnis. Lonnie [Chisenhall] was down for a while. We lost three-fifths of our starting rotation. And our DH. All for extended periods of time. And not just to guys on the fringes, these were key players. So we need to be healthy, we need our young guys to take that next step of development, and we need the guys we brought in externally to make contributions.

Let’s talk about this ground-ball staff. After you traded for Lowe, you start to look at this rotation … you’ve got Lowe, Masterson, Carmona, Jimenez. It raises a couple of questions. First of all, how do you decide who starts in the infield given all these ground-ball pitchers? Do you bench a young, up-and-coming hitter like Chisenhall in favor of Jack Hannahan, one of the best defensive players in the game at any position?

[Hannahan] is great, and we like what Casey Kotchman brings to his position, not only on ground balls, but on balls in the dirt, he’s got tremendous hands. As well as his feeds to other bases. On 3-6-3 double plays, he’s as good as anyone in baseball. So we are very mindful of our infield defense, it’s very important to our team’s success.

Would Hannahan move around, maybe play some second base?

One of my favorite books of all time is Weaver on Strategy. There’s a section in the book in which [Earl] Weaver talks about how he handles his shortstop Mark Belanger, who was an unbelievable defensive player at short, but a terrible hitter. Instead of using Belanger as a late-game defensive replacement, Weaver used to play Belanger to start the game, then pinch-hit toward the end and use someone else in the later innings. Could that be a consideration with Hannahan, play him for the first six innings, then bring in Chisenhall for the rest of the game?

[Indians manager] Manny [Acta] is very creative. We’ve looked at all the players on our roster a lot to try and figure out how we can put the best team on the field. Not only based on the opponent’s pitcher, but also based on the attributes of our own pitchers. For instance, when Josh Tomlin pitches, our outfield defense is probably more important than our infield defense. But when Derek Lowe pitches or Carmona pitches … or Hernandez pitches, those are times where our infield defense is at a premium. And you can find those opportunities, where, OK, even if we think Lonnie is a better offensive player than Jack, you know what, Jack will start the game as long as that starting pitcher is in there. And then if a meaningful spot comes up offensively, and Manny wants to try to leverage that at-bat, he can do that, and finish the game another way.

Would you give consideration to the other team’s lineup then too, if there are, say, a bunch of speedsters or guys who beat the ball into the ground in that lineup?

Those are all things that come into play. These are the types of things we spend a lot of time talking about.

It seems the infield is shaping up as a strength of the club if you look at guys like [Asdrubal] Cabrera, Kipnis, and Chisenhall. In the outfield, on the other hand, with Sizemore’s health something of a concern, is that an area the team might have to address at some point here?

Potentially, yes. We’re hopeful that Grady can still contribute for the majority of the season. To the extent that we can improve our alternatives until Grady comes back, we’ll certainly look to do it. We do feel we’ve made some moves that could help us, though. There are a range of guys at that position — obviously someone like Shelley Duncan who’s returning. But also smaller trades for guys like [Russ] Canzler and [Aaron] Cunningham, guys we’ve liked in the past who we feel have some chance to contribute. And then guys with some experience who had difficult off-years for whatever reason, [Ryan] Spilborghs, [Felix] Pie, Fred Lewis. It gives us some options to choose from.

What are your expectations for Shin-Soo Choo? He quietly became one of the best outfielders in baseball. Then he had to deal with the possibility of military service back home in Korea, then he has all these injuries. [Ed. note: He was also arrested on a DUI charge last May.] What do you expect for this year?

He’s very happy to turn the page on last season. It was a very tumultuous year, on the field, off the field. He obviously had the off-field incident and that certainly distracted him because he’s a very prideful guy, and had all the eyes of a nation looking at him. He is now completely refreshed. If you talk to Choo now, he is in a very different place mentally. He’s in great physical shape. He’s been out at our complex since January, he’s been working out at the complex almost daily. Up until last year, he’s always been that guy who’s faced challenges and come out better for it. Whether it’s his ability to attack left-handed pitching, his defense in the outfield, playing balls against the wall, the accuracy of his throws. We expect him to get back to the Choo we’ve grown accustomed to in the past. I’m confident 2011 will be a blip on his radar.