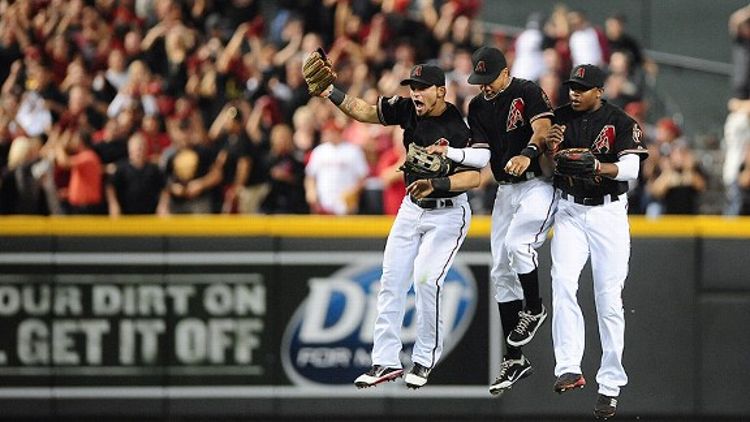 The following is a complete list of David Freese’s career accomplishments, prior to last night’s game:

OK, that’s not quite fair to Freese, who rode sky-high batting averages on balls in play to a solid line of .297/.355/.426 in the 167 games in which he played over the past two seasons. Still, Freese was something like a sixth banana in a loaded Cardinals lineup … until he saved the Cardinals’ season with two gigantic hits.

Philies starter Roy Oswalt had yielded several hard-hit balls through the first three innings, but came into the bottom of the 4th still leading 2-1. That’s when his command left him entirely. Oswalt started the inning by walking Lance Berkman. He then plunked Matt Holliday on the first pitch. When pitchers can’t find the plate, the natural impulse is to pound the middle of the plate and get some strikes. But the next two hitters were waiting for that to happen. Yadier Molina got unlucky, whacking a ball to right-center that Hunter Pence caught on a leap. Freese wasn’t, smashing a first-pitch fatty down the left-field line to cash two runs and give the Cardinals a 3-2 lead.

Two innings later, Oswalt again couldn’t spot his fastball properly. He threw a 91-mph heater, thigh-high, middle-in — and Freese destroyed it, landing the ball high up the grass embankment for a two-run bomb. Pandemonium at Busch.

Meanwhile, Edwin Jackson lived up to the Thriller nickname the Internet just made up for him five minutes ago. Jackson started the game by thrilling no one other than Phillies fans. On the very first pitch of the game, Jimmy Rollins slammed a deep drive to center. As they have throughout the playoffs, shadows wreaked havoc with the play; Jon Jay still may not have caught the ball if they’d tracked it right off the bat, but losing it in the shadows ensured he’d have no chance. Before Jackson could lament the networks’ supreme power over scheduling and their refusal to do the obvious and schedule concurrent games to solve the shadows problem, Chase Utley had banged a triple down the right-field line, cashing Philly’s first run, and Hunter Pence had followed with a sharp single to make it 2-0 after three batters. Then just as quickly, everything changed. Jackson struck out Ryan Howard, and Pence was called out trying to steal, despite replays showing he was safe. Two outs, nobody on. Starting with Howard’s strikeout, Jackson pitched six innings, yielding no runs, two hits, one walk, and striking out four.

The Phillies fared better against the Cardinals’ relief corps. In the 8th, they tallied a run to cut the lead to 5-3, then brought Howard up as the potential tying run. Tony La Russa immediately went to his bullpen, summoning the lefty Marc Rzepczynski. The sequence to Howard went as follows: 94-mph fastball down the middle for strike one; a very hittable slider in the same spot that fooled Howard for strike two; sinking changeup that elicits a futile swing for strike three. Inning over, threat over, and for all intents and purposes by then, game over.

We’ve repeated this mantra numerous times since the trade deadline, but let’s do it one more time, with feeling: In terms of immediate effects, very few deadline deals actually generated more value for a team than the Colby Rasmus deal did for the Cardinals. Yes, Rasmus butted heads with La Russa over his preparation methods nearly from day one. Yes, he might become a true star in Toronto. Bur for right now, the Cardinals have an excellent fourth starter and a much deeper bullpen that features a high-leverage option versus lefties in Rzepczynski. The Cardinals are now one game from advancing to the NLCS. Sure, that one game is at Philly, against the best pitcher on the planet in Roy Halladay. But they would have never even arrived to this point if not for the Rasmus booty.

After broadcasting just one five-game League Division Series in its first four years covering the playoffs, Turner Sports has now tripled up. The Diamondbacks showed they would in fact need a passel of runs to extend the series with the lamentable Joe Saunders on the mound (as @cantpredictball noted on Twitter, Braves closer Craig Kimbrel struck out 19 more batters than Saunders did this season, despite Saunders throwing 212 innings), and the D-backs did in fact bomb the Brewers, making it three deciding Game 5s in the first four series of the 2011 postseason.

There wasn’t much nuance to this game. Saunders and Randy Wolf were equally terrible, both pitchers routinely missing up in the zone with high-80s fastballs and hanging breaking balls that your T-ball-playing kid could hit 400 feet. Arizona struck right away, with Ryan Roberts launching a grand slam down the left-field line (marking, incredibly, the fourth straight home game in which Arizona had launched a grand slam), and Chris Young following with a solo blast to left-center. All told, the D-backs blasted four homers (two by Young) against left-handed pitchers, building on a regular season in which they led the National League in home runs off lefties by a wide margin.

The Brewers did touch Saunders for three runs of their own through three innings, narrowing Arizona’s lead to 5-3. When Joe Saunders’ spot came up in the lineup, with the D-backs leading, Kirk Gibson made the call: Hit the showers, lefty. You’re done. The TBS announcers seemed surprised, telling us Arizona is rolling the dice by making this move because they’re up two runs and are now choosing to go long with their bullpen.

This was 87,000 flavors of wrong. There are no worries of burning out your bullpen in the playoffs, not when days off abound, and every game (and hence every little advantage) carries huge meaning. Saunders may have held a two-run lead at the time that Gibson pulled him. But he also had nothing, and was getting by mostly because the D-backs happened to hit the pinata presented to them harder than the Brewers did theirs. In what was sure to be an even higher-scoring game, bringing in any half-decent right-handed hitter to face a flagging Randy Wolf gave Arizona a better chance to add to its total.

Still, somehow, this was considered risky. Pundits often conflate doing anything with taking a risk. This is fatally flawed thinking. Often, the riskiest move is doing nothing. Managers shouldn’t give a crap about getting backlash from bucking convention. They should strive to win games for their team. The good move, the only move in this situation, was to pinch-hit — raise your chance to score runs now, and get a comparable (or if possible, better) pitcher into the game to take over for your starter, who’s destined to keep getting shelled. That Cowgill happened to bounce a ball through the hole to make it 7-3 Diamondbacks, and that Owings pitched two scoreless innings to get the win and continue his vulture streak for the ages, were simply happy byproducts of a no-duh decision.

The series now returns to Milwaukee, where Ian Kennedy will face Yovani Gallardo. No team owned a bigger home/road split this year than did the Brewers, who went an incredible 57-24 at home and just 39-42 on the road. In related news, no stat means a hell of a lot when a series comes down to fairly evenly matched teams and two fairly evenly matched pitchers (3.22 FIP for Kennedy this year versus 3.59 for Gallardo, but Gallardo makes up for it with a better and steadier career). In fact, the same can be said for tonight’s Yankees-Tigers game. You want postseason drama? You’re about to get a ton of it, and we’re still in the first round.