Can the Yankees Make a Playoff Run? 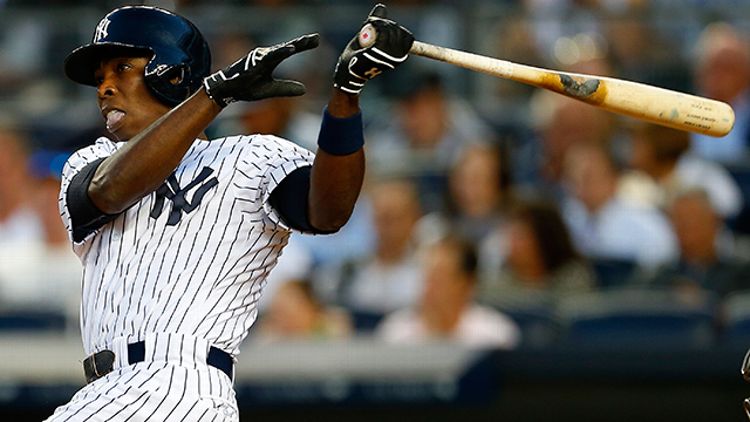 No one has hit a more polarizing home run this season than the one Alex Rodriguez launched into the center-field bleachers Sunday night.

If you’re an A-Rod hater or just a fan of swift justice, you had to wonder how Rodriguez was on the field in the first place and why his arbitration hearing probably won’t happen until the offseason. If you’re an A-Rod fan, appreciate an interesting career arc, or were appalled by Ryan Dempster repeatedly throwing at him — on the anniversary of Tony Conigliaro’s life-changing beaning, no less — you probably rubbed your hands together with glee. If you’re a Red Sox fan, you had to be steaming as A-Rod rounded the bases, then punctuated his home run with the David Ortiz point-to-the-heavens move when he reached home plate. And if you’re a Yankees fan, A-Rod’s blast also offered something simpler: a big run in a comeback win, and another step forward for a team trying to claw its way back into the playoff race.

The Yankees sit eight games behind the first-place Red Sox, with 39 games left to play (Boston has 35 left). Say the Red Sox play roughly .500 ball the rest of the way, 18-17. For the Yanks to merely tie, they’d need to go 28-11, a .718 winning percentage. New York has recent precedent on its side, starting with the Dodgers, who just reeled off 42 wins in 50 games, winning at an 84 percent clip. Of course that was also one of the three best performances by any team over a 50-game stretch in the past century. Moreover, the Yankees trail two other teams in the AL East, sitting two and half games behind the Orioles and seven back of the Rays. So not only do the Yankees need to win about three of every four games for the rest of the season to have a shot, they have to hope the AL East’s second- and third-place teams also fare worse.

The situation looks only slightly rosier in the wild-card chase. The Yankees trail Oakland by 6½ games for the second wild-card spot. They would also need to make up two games on the Indians plus 2½ games on the O’s, while also breaking their current tie with the Royals. We’re just two years removed from two of the greatest September comebacks of all time occurring simultaneously. But if miracles weren’t incredibly rare, we wouldn’t call them miracles.

So why sweat the chances of a team that’s played at six games under .500 for the past three months?

First, the schedule works in the Yankees’ favor. All 39 of their remaining games are either against AL East rivals or sub-.500 teams. Not just sub-.500 teams … cream puffs. They play a total of nine games against the Giants, White Sox, and Astros. Those three teams have combined to win just 39 percent of their games. Meanwhile, the Yankees start a four-game series today against Toronto; they play a total of 10 games against the 10-games-under-.500 Jays the rest of the way, more than versus any other team. The remaining 20 games are against Boston, Tampa Bay, and Baltimore, three tough opponents, but also the three the Yankees need to pass to have a shot at the postseason. For a team that wants to control its own destiny, you couldn’t ask for a better setup.

The better news is that this isn’t the same Yankees team that’s sputtered for months. This was the lineup they trotted out on July 19, the first game back from the All-Star break:

… and this was the Yankees’ lineup for Sunday night’s lovefest at Fenway:

The Yankees have averaged more than eight runs a game in their past six contests, capped by Sunday’s 9-6 come-from-behind win. Soriano went 0-for-6 Sunday, but still bagged one of the most decisive Player of the Week awards of the year, going 15-for-22 in his previous five games, with five home runs and a ridiculous 18 RBIs. Those 18 runs batted in actually happened over four games, tying the record for the most productive four-game stretch in history. Of course Soriano can’t possibly sustain that kind of streak. But he’s still a productive power hitter going to a stadium that suits his skill set; and he’s certainly a huge upgrade over the punchless Wells. Granderson is also raking since coming off the disabled list, hitting .288/.422/.462; you’d certainly rather have him than Almonte, even if that .422 OBP probably won’t last.

But the biggest upgrade of all could come from A-Rod himself. In his first 12 games back, Rodriguez is hitting an impressive .319/.407/.489. Seven other players have manned third base for the Yankees this year: Jayson Nix, Luis Cruz, Chris Nelson, David Adams, Alberto Gonzalez, Kevin Youkilis, and Lillibridge. In their time playing third, those seven combined to produce an aggregate line of .212/.264/.282, with four home runs in 401 at-bats. For comparison’s sake, Reds starting pitcher Mike Leake’s career batting line works out to .253/.280/.323. Though no superstars changed hands at the non-waiver trade deadline, what matters isn’t only who a team acquires but also who gets shunted to the bench or off the roster once the new guy arrives. Rodriguez might be 38 years old, a defensive and baserunning liability well past his prime who’s facing a potential 211-game suspension. But he’s replacing a motley crew of fill-ins who collectively produced sub-replacement level numbers. If A-Rod stays hot, we might be able to pencil the Yankees in for something close to a two-win upgrade between his first game back and the end of the season.

They’ll still need to be nearly perfect to have a shot, and multiple obstacles stand in their way. Derek Jeter is still rehabbing, and could be a week or more away from returning. CC Sabathia continues to be a shadow of his former self, with both severely diminished velocity and shaky command. Phil Hughes should call himself Demolition, because lately he’s been a walking disaster.

The Yankees seem intent on inflicting some wounds on themselves, too. Preston Claiborne worked mostly low-leverage situations this year, and doesn’t have any Mariano Rivera–style retirement tours in his future. But he still posted a three-to-one strikeout-to-walk rate, 2.88 ERA, and 3.02 FIP this season … compared to Joba Chamberlain, who has walked a batter every other inning, served up six homers in just 31⅔ innings, and owns a 4.83 ERA and 5.22 FIP that doesn’t fully convey the horror Yankees fans feel when he enters a game. Somehow Chamberlain is still on the roster and Claiborne’s gathering dust at Triple-A after getting sent down last week.

Still, after everything that’s happened in the Bronx this year, the Bombers aren’t dead yet. They still have an outside shot at a playoff run. If that happens, A-Rod may be one of the key guys who helps get them there. Which would make for great theater if nothing else — how many of us will have ever seen that many heads explode at the same time?

Video: Kings of L.A. Beat Hank's A-1 All-Stars in the Drew League Semifinals