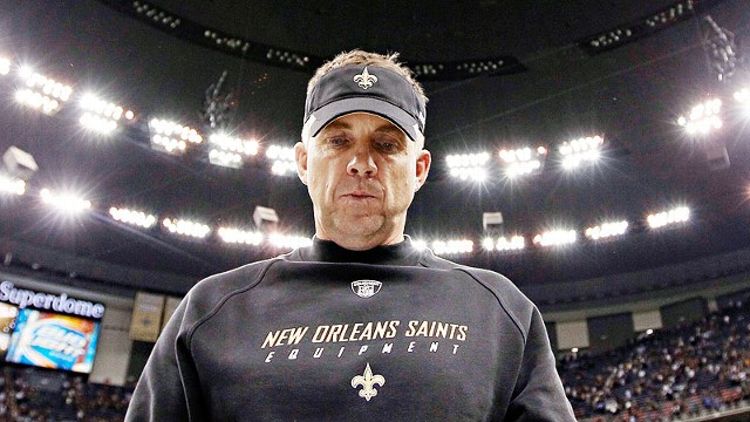 The Super Bowl host-city curse lives on. In the 2010-11 season, the Super Bowl was coming to Dallas, and Tony Romo broke his collarbone, the team finished 6-10, and their new stadium wasn’t quite ready yet. In 2011-12, the Super Bowl was coming to Indianapolis, and during that season, Peyton Manning was sidelined with a neck injury, the Colts finished 2-14, and Adam Sandler released Jack and Jill. (The curse works in mysterious ways.) In 2012-13, the Super Bowl is on its way to New Orleans, and the NFL has dropped the hammer on the Saints for their involvement in Bountygate — a full year suspension for coach Sean Payton, an eight-game suspension for general manager Mickey Loomis, a six-game suspension for assistant coach Joe Vitt, a $500,000 fine, the loss of second-round draft picks in 2012 and 2013, and player suspensions likely to follow soon. (Former defensive coordinator Gregg Williams was suspended indefinitely.) Payton & Co. are making one last-ditch effort to beg for mercy by filing an appeal with Commissioner Roger Goodell. (Yes, they are strenuously objecting to their suspensions.)

Plenty has already been said about the New Orleans Saints’ bounty scandal and the severity of the punishments, but I want to step back and give you a quick Sports Law 101 look at what gives the commissioner the right to suspend the Bountygaters, and what rights the Bountygaters have to challenge the suspensions.

The commissioner derives his power from three primary sources — the NFL Collective Bargaining Agreement (Article 46), the NFL Constitution and Bylaws (Article VIII), and the NFL Conduct Policy. These rules give the commissioner virtually complete authority to protect the best interests of the game. For example, the conduct policy explains that “[a]ll persons associated with the NFL are required to avoid ‘conduct detrimental to the integrity of and public confidence in the National Football League.’” The commissioner is empowered to investigate “conduct detrimental” and is given “full authority to impose discipline as warranted. Discipline may take the form of fines, suspension, or banishment from the League.” The conduct policy is all-encompassing. It “applies to players, coaches, other team employees, owners, game officials and all others privileged to work in the National Football League,” and NFL teams “are strongly encouraged to communicate this policy to independent contractors and consultants and to make clear that violations of this policy will be grounds for terminating a business relationship.”

Players, coaches, etc., who are subject to discipline by the commissioner under the conduct policy do have a right to appeal, but that appeal is not heard by a neutral third party. Instead, the appeal is heard by the commissioner himself. (The policy gives Williams the right to seek reinstatement beginning one month prior to the one-year anniversary of his suspension.)

So, Goodell is empowered to define the crime, investigate it, punish it, and then hear the appeal on it. What kind of system allows an appeal only back to the person who originally punished you? The system that the players (and coaches) themselves agreed to. It does not have to be this way, as the NBA and Major League Baseball have proven. In those leagues, the players have the right to appeal suspensions handed down by their respective commissioners for “conduct detrimental” to an impartial arbitrator. NBA, MLB, and NHL players also have the right to appeal to an independent arbitrator for discipline that stems from positive drug tests. NFL players do not. It might seem unfair, but it’s what the players and coaches signed up for.

So Payton’s fate will be decided by the man who already decided his fate. That doesn’t mean that his appeal is completely futile. It might be highly, highly unlikely, but there are at least three reasons why Goodell might reduce the suspensions on appeal.

First, he has (sort of) done it in the past. After Goodell suspended quarterback Ben Roethlisberger for six games for violating the conduct policy, he said that he would consider reducing the suspension if Roethlisberger stayed clear of any trouble off the field and complied with a number of league-imposed conditions. Roethlisberger met those conditions, and Goodell reduced the suspension to four games. Goodell hasn’t made any promises regarding Payton’s suspension, but he has at least shown a willingness to give time off for good behavior.

Second, it cannot be a foregone conclusion that the suspensions will not be reduced. After all, the conduct policy does promise a right of appeal (even if it’s just back to the commissioner). If it’s a foregone conclusion that the suspension will be held, then the appeal is no appeal at all. If the right to appeal means anything, it must mean that a coach or player can come forward with new evidence or new arguments that can persuade the commissioner to reduce the suspension. Whether Payton and the Saints have anything up their sleeves that might persuade Goodell obviously remains to be seen.

Third, Goodell can prove that this is in fact a real right of appeal by reducing the suspensions. What better way to diminish the perception of futility, unfairness, and lack of due process (and ward off potential litigation) than by reconsidering Payton’s arguments and evidence? It’s certainly a long shot, but it’s certainly not inconceivable that Goodell might show some leniency.

And, what about the players who could eventually be disciplined for their participation in Bountygate? Are they subject to the same fate? Well, here’s where it gets more complicated and actually presents a scenario that would make for a pretty good exam question for my sports law class. (Note to my students — do not read past this point until after you turn in your final exam in May.)

So, how do we classify a hybrid situation where players have arguably (and allegedly) engaged in misconduct off the field (conspiring to engage in a bounty scheme to injure players) and on the field (intentionally trying to injure players on the field)? If we classify it as on-field, any players disciplined for Bountygate will have the opportunity to appeal to Shell and Cottrell. If we classify it as off-field, the players are back with Goodell. A similar issue actually came up during the Pacers-Pistons Malice at the Palace, where a fight that started between Ron Artest and Ben Wallace ended up with players fighting with fans in the stands. Commissioner David Stern suspended a number of players for the incident, including Jermaine O’Neal.

How will it play out here? Given the seriousness of the sanctions and Goodell’s clear message that the Bounty scandal impacted both player safety and the integrity of the game, in dealing with the players’ involvement in Bountygate it is likely that he will again exercise his broad powers under the conduct policy, which will lead to an appeal right back to the commissioner. Right where he wants it.