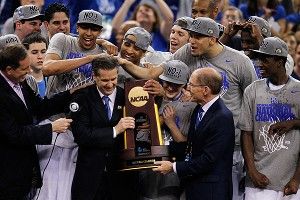 WE TOLD YOU, AMERICA. Or at least one of us did. This piece, from Matt Jones, ran during Grantland’s Homerism Week.

“As Potter Stewart once said about pornography, “I know it when I see it.” And when it comes to Kentucky winning the national championship this season, I see it and I know it. The last time I was this certain of the Wildcats’ fate was in the fall of 1995. Going into that season with Antoine Walker, Tony Delk, Ron Mercer, and a pre-Porcini’s Rick Pitino, I was sure UK was ready to fulfill its destiny and give me the first UK title of my lifetime. That 1996 Kentucky team had nine future NBA pros on its roster, and its demolition of opponents throughout the season was magical to watch. The Wildcats lost twice that season — once to UMass and once to Mississippi State, both of which were loaded enough to eventually make it to the Final Four. It was an exhilarating ride for a Blue-obsessed teenager, made even more special by the knowledge from the beginning of the inevitability of our final destination.

Sixteen years later, this Kentucky team is headed for a similar date with destiny. Just as the 1996 group had a coach considered to be among the game’s best but without the national championship to confirm it, the 2011-12 version has John Calipari desperately yearning to finally have his face close the “One Shining Moment” montage. The roster is once again loaded with talent, as Calipari has stacked the deck with seven future pros and five potential NBA lottery picks. Early performances have showcased a team whose length and athleticism cannot be matched by any team outside of Chapel Hill. This is the year Kentucky hangs banner no. 8, and no treatise on the emergence of Kendall Marshall or the majestic beauty of Austin Rivers can sway me from that conclusion.”


READ MORE HERE
So congrats to Kentucky! Winners, all of you! Now can you guys please stop setting stuff on fire?