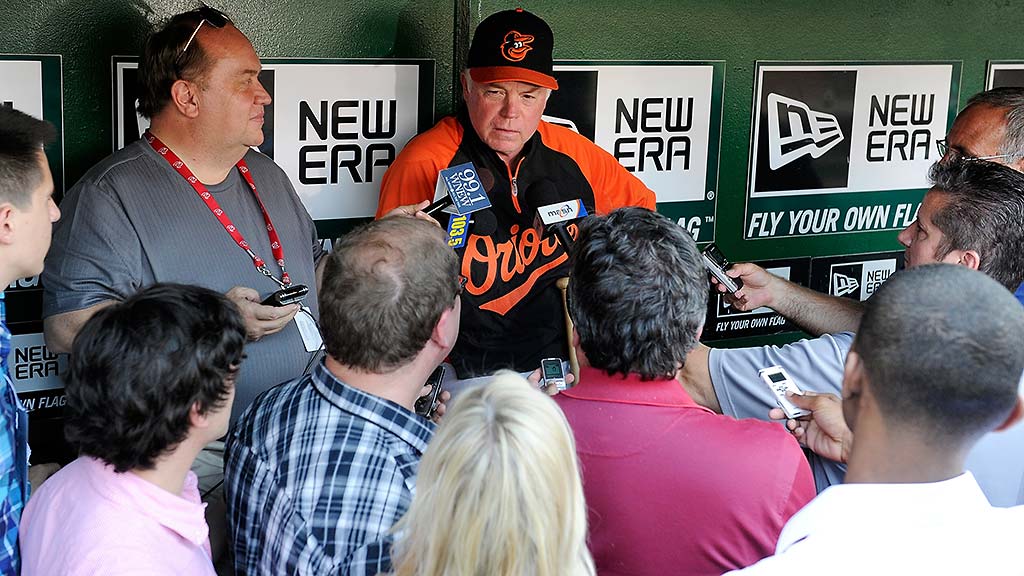 The Baltimore Orioles are no strangers to small, talkative managers. They had perhaps the greatest of all time in Earl Weaver, who was known to hold forth on subjects ranging from the intricacies of the balk rule to Miss Alice Sweet’s tomato plants.

While there’s no substitute for the original, it’s nice to see that Buck Showalter is carrying on the family tradition. On Saturday, having just lost a game thanks in large part to Nelson Cruz’s five hits, Boston starter John Lackey called attention to Cruz’s 2013 PED suspension in a really oblique, haughty way: He started with “I’m not going to comment on him,” and then went on to comment on him, stopping just short of ending his episode of pique with “Bless his heart.” If a sorority president at Wake Forest called out one of the Tri-Delts for her involvement in Biogenesis, that’s how she’d do it.

Buck fired back on Sunday in great style: As Christ argued with the Pharisees, Buck suggested that Boston should get its own house in order. Then, like a skilled judoka, he transitioned into a discussion of Lackey’s own career renaissance and increased velocity at age 35.

This sort of thing is hardly out of character for Showalter, though. What follows is a brief list, in no particular order, of Buck’s best button-pushing moments during his Baltimore tenure.

• After the Ravens won the Super Bowl, the NFL wanted the Orioles to move a home game so that Joe Flacco & Co. could begin the next season in Baltimore. Jets coach Rex Ryan suggested the Orioles should simply give up the home game, potentially one with playoff implications, so that it would be easier for NFL fans to park. It was NFL exceptionalism at its worst, and Buck telling Ryan to know his place felt most welcome.

• Buck sees through self-serving arguments in all sports: When the Yankees led the charge against Alex Rodriguez last year, they did so because an A-Rod suspension would save them from paying his preposterous salary for a season. Well, Showalter shared his thoughts on the richest team in baseball making a naked cash grab: “If Bud lets them get away with that, they’re under the luxury tax. If they can reset, they can spend again, and I guarantee you in two years Matt Wieters is in New York.”

• In fact, Buck has something of an egalitarian streak, at least when it comes to his AL East rivals. In April 2011, he told Men’s Journal: “I’d like to see how smart Theo Epstein is with the Tampa Bay payroll. You got Carl Crawford ’cause you paid more than anyone else, and that’s what makes you smarter? That’s why I like whipping their asses: It’s great, knowing those guys with the $205 million payroll are saying, ‘How the hell are they beating us?’”

• Nobody’s safe, though; not even Buck’s own players. When Buck found out that minor leaguer Josh Hart didn’t know who Frank Robinson was, he demanded Hart submit a one-page report the next day.

• The real winner, however, is the prank Buck and reliever Jim Johnson pulled on Darren O’Day in 2012 for MLB Fan Cave. O’Day was evidently fond of something called the Solowheel, which is a self-powered unicycle with no handlebars. They hired an actor to play a Wall Street Journal reporter who’d come to the park to interview O’Day about the Solowheel, and while the right-hander was demonstrating it, Buck came out and read him the riot act for horsing around.

You don’t have to actually click most of these links to get the full effect of Showalter’s penchant for the bon mot, but you need to watch this video. Need to. O’Day looked like he was going to cry.

• Of course, if you dish all this out without being able to take it, you’re a jerk and not a hero. But don’t worry: Buck can laugh at himself, even when Mark Reynolds leaves him hanging on a high five.

Cheers for the little guy, moral arbiter, and man of good humor: Buck Showalter is truly a Renaissance man.

Watching ‘The Decision’ As Television on Its Four-Year Anniversary