BQBL: Waka Flacco Flame and the Debut of Ponder’s Progressions 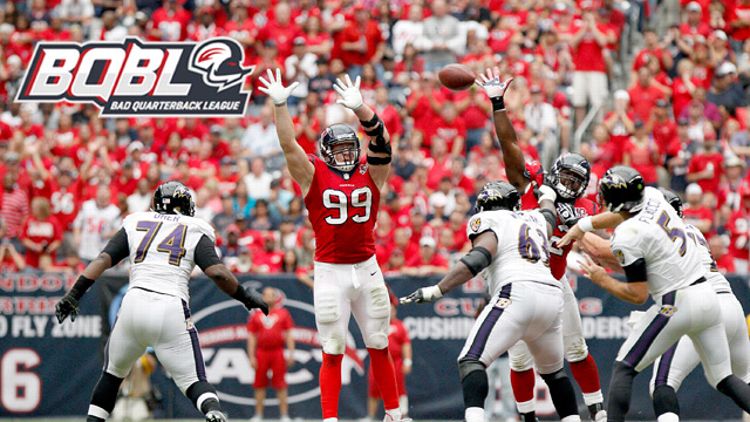 The scores weren’t high on the BQBL leaderboard this week, but the outstanding individuals occupying it performed acts displaying a level of ineptitude that we had yet to see in the BQBL.

Ravens (Joe Flacco), 79 points: With both teams coming into the game at 5-1, the buildup to the Ravens-Texans tilt on Sunday had an air of insincerity considering all the supposed eliteness and contenderism at stake. Regardless, at the outset, this was by far the most intriguing of the early slate, mostly in a “I might see the next AFC champion establish itself” sort of way. After the first half, it was the most intriguing in a “I might see Joe Flacco score 1,000 points today” sort of way.

Waka Flacco Flame’s Sunday started pretty well. His first drive of scripted plays was an effective mix of a few runs with a couple passes that moved the ball from his own 22 to the Texans’ 33, eventually ending with a field goal. At that point you felt like Waka Flacco had what it took to move the ball against a Texans D that was ranked in the top five in total yards, passing yards, and rushing yards. He did not. To appropriately capture the glorious disaster that was the rest of Waka Flacco’s first half, let’s have a look, dreadful drive by dreadful drive:

Fourth Possession: Ray Rice runs for three yards. Then J.J. Watt does the most J.J. Wattish thing he could do. Flacco drops back and keys on Torrey Smith, Watt realizes that he isn’t going to pulverize Flacco on this particular play, so he stays back, elevates as Flacco throws, gets a thumb on the pass, and Johnathan Joseph TAINTs the deflection.

Eighth Possession: Seven-yard pass, four-yard pass (FIRST DOWN!!!), eight-yard pass (THREE IN A ROW!), incomplete, interception. Now, there are some fantastic details to this particular interception:

Halftime (Flacco, since first possession: 4-12, one TAINT, one standard pick, one safety): He finished with only 147 yards and a .3 QBR. I, like you, don’t know exactly what QBR means, but I do know that it goes from 1 to 100. Next week Waka Flacco’s on his bye, so his QBR will drop .3 points.

Ponder’s ineptitude made me (1) fiend for some Joe Webb, (2) be very confident about the return of the Ponder’s Progressions bit, (3) wonder how in the world a quarterback con only attempt 17 passes, throw two picks, and still win a football game. Christian Ponder, failing forward.

Cardinals (John Skelton), 40 points: John Skelton has at least one interception in each of his last 10 games — the longest such active streak in the NFL. As he’s facing the 49ers defense next week, I am very confident that this streak will get to 11 games. Even with Ponder racking up a big BQBL week of his own on Sunday, Skelton failed to make this game competitive. It wasn’t just that he had two turnovers, it was how he had two turnovers. His confidence-crushing fumble came on the Cardinals’ 13-yard line after a long confidence-building drive. His TAINT was very Favrian — fresh out of the locker room from halftime, game plan revised, attitude adjusted, ready to turn the game around, Cardinals with the ball, third-and-6. Skelton drops back, decides the pocket has collapsed even though it hasn’t, starts running toward the line of scrimmage, and lobs a Favrian flip into double coverage that turns TAINTy real quick. John Skelton, keep the streak alive. You are the Joe DiMaggio of interceptions.

Seahawks (Russell Wilson), 39 points: The idea that Russell Wilson was one BQBL point away from John Skelton made me think that there’s a flaw in our scoring system … until I realized that Wilson faced the 49ers defense. I wish I could get Barnwell to do defense-adjusted BQBL stats. I swear this league is slowly boiling down to “start whoever is facing the 49ers or the Bears.”

New York Jets (Mark Sanchez), 26 points: So Sanchize (so adorable that that was once his nickname) kicks the ball out of the back of the end zone for a safety. The box score has him only losing one fumble (the one from later in the game), and the Pats never really possessed the one he kicked out of the end zone, so the official BQBL ruling is that this is scored as a kept fumble and a safety. We also need to add a new score for “kicking the ball out of your own end zone in terror.”

1) Panthers: Sophomore-slumpy Cam Newton against the Bears should be triple digits.
2) Cardinals: Skelton + 49ers defense = turnovers.
3) Falcons (sleeper pick): I have no reason other than “I feel like Matt Ryan is due for a stinker.”