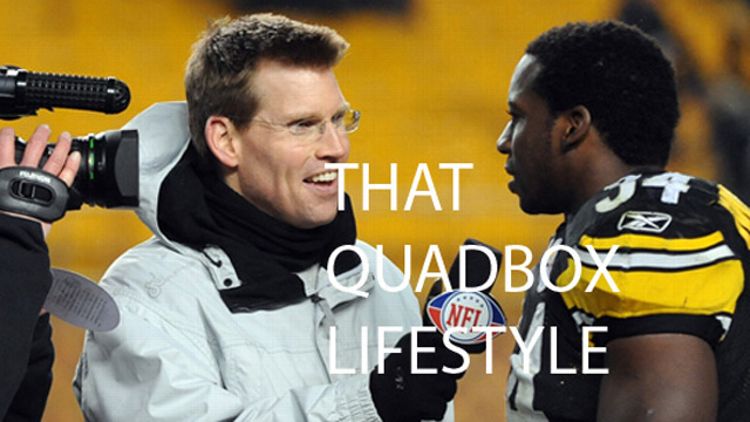 I don’t really know where to start. There’s a lot to discuss. First the facts?

• NFL RedZone is a television channel.
• It is hosted by Scott Hanson.
• It premiered in September 2009.

That’s really all I’ve got. Now for the emotions.

This Edison-rivaling invention referred to as “RedZone” is a game changer in the same way running water made wells obsolete. It’s incredible. Similar to how it’s hard to believe we as a TV-watching culture viewed non-HD television with such joy for so long, it’s hard to believe that for 99.82 percent of my life, I pushed the “last” button on my remote while two games were on simultaneously, all the while sulking that I didn’t have access to all the other Sunday games being played. Getting to flip between two games was exciting and, believe it or not, at times worked like a poor man’s RedZone, with one game reaching high drama as the other was at commercial.

But it wasn’t RedZone. Not even close.

Wait, do you not know what RedZone is? Were those earlier facts and initial description not enough? My apologies. Let’s try this again.

• NFL RedZone is a television channel that you have to pay for, but considering that it should cost $3,000 but ends up being around $40, it’s the biggest steal since the first year McDonald’s did the Monopoly game and put too many free hash browns up for grabs.

• There are no commercials. FOR SEVEN HOURS.

• It is hosted by Scott Hanson, who is one part typical host, 27 parts Wizard of Oz. I’ve seen his face a few times, but not enough to have actually convinced myself that he’s real. In addition to narrating and commentating on the day’s events, he has access to a device. A very powerful device (to be discussed later).

• Scott Hanson (NFL RedZone) is not the same as Chris Hanson (To Catch a Predator), but you will make that mistake here and there.

• At the end of the day, Scott blesses the viewers who have just spent seven hours immobile, ordering BBQ, via delivery, and not going to the bathroom with a montage of every single touchdown that took place over the course of the RedZoneDay. It’s like Luther’s “One Shining Moment” but without the tears, from the players and from me.

• There is no proof that there are any other employees at RedZone, so one has to believe Scott is responsible for everything.

• When RedZone is on, the only historical timeline that is relevant in the eyes of Him is whether or not said event took place on RedZone. If Scott Hanson says Drew Brees threw three touchdowns in a half for the first time ever and you seem to remember him doing it four years ago, just know that it didn’t happen, you’re wrong, and you will pay for questioning Him. Other news — Drew Bledsoe: never existed.

In case you’ve never seen RedZone, this is how they kicked off the 2012 season.

Yes, that’s the countdown into the Transformer NFL opening RIGHT INTO THE QUADBOX. No idea what the QUADBOX is? I guess this would be a good time to discuss the aforementioned special “device.”

When RedZone is at its least dramatic (which is still high drama, comparatively), Hanson flips between games, putting the most exciting one on the main screen. He does this by pulling a blue lever on his special Scott Hanson RedZone future device. But when things start getting hot and heavy, simply flipping between games becomes inadequate. Dead time has since left the building and, with two teams tied in the fourth quarter with less than two minutes left, for example, viewers need to watch both games at the same time. So what does Scooter do in his Area 51 football bunker? He twists the orange knob and BOOM, two screens. “Dubbox,” the kids are apparently calling it.

I’ve seen this with my own eyes (the split screen, definitely not Hanson doing the orange twist) and it is a beautiful thing to watch. But that’s not where it stops. Sometimes there’s more, like when a third game is also in a high-drama situation. When this happens, at the discretion of The Hanson (which is always an appropriate judgment call), he flicks the green thingamabob and — POW — the glory-filled “Tribox.”

I’ve only seen a few Triboxes in my day, but let me tell you: If this happens, you have no choice but to stand up and scream, with your friends or completely by yourself. The Tribox is an achievement.

And this, finally, brings us back the QUADBOX. As I’m sure you’ve figured out, this is when there are four screens on the television (caused by Hanson allegedly spinning the red wheel). But I have never witnessed the QUADBOX with my own eyes. Yes, I know good, trustworthy people who claim to have witnessed it (and sent me pictures of their QUADBOXED televisions), but until I see it, it’s merely a myth.

Rumblings on the Internet have people discussing the Quintbox, but that’s just taking it too far. The only way a Quintbox even happens is if there is a Presidential Order for Hanson to “Bop It Extreme,” which is more of a distress signal to our allies (watching RedZone) than a cool way to watch five really small games on one television.

Yes, RedZone is already bigger than football. And its potential reach can go so much further than simply exciting Sundays and wartime distress signals.

Picture this: four of your favorite TV shows or movies, all on at the same time, and Scott Hanson (yes, he is the only man on this Earth qualified to make such high-pressure calls) juggling between the four based on which is the most exciting. Yes, Scott, how did you know I wanted to see the Independence Day Bill Pullman speech, then shift into the final Drumline battle, then the part when Will and Grace try to have sex for the first time, and finally the intro theme sequence of Recess? How? Because you’re Scott Hanson, the hero we need right now but don’t even come close to deserving.

Or, to keep the football theme alive, what if RedZone works for four gridiron classics? Say Remember the Titans, The Replacements, Any Given Sunday, and Little Giants are all on at the same time. Who really wants to sit through all the lame talks of race equality and bar makeouts and emotional pregame speeches and Chevrolet dealership–for–gas station bets when there’s football to watch? Not Scott and, therefore, not you or me. Let’s allow Scott to flip between these four great films, and at the end, who knows, maybe we’ll get a Denzel/Keanu/Foxx/Moranis QUADBOX? Who knows?

In this RedZone era, all we want is the action, immediately, always, and if Mr. Hanson is allowed to be at the wheel (or the Bop It Extreme) in all facets of our life, solely controlling our emotions by way of a single children’s toy, I can’t imagine how this could go wrong. That is, unless with such power comes greed, and with such greed comes evil, in which case he’s going to kill us all by Week 15.

BQBL: Waka Flacco Flame and the Debut of Ponder's Progressions