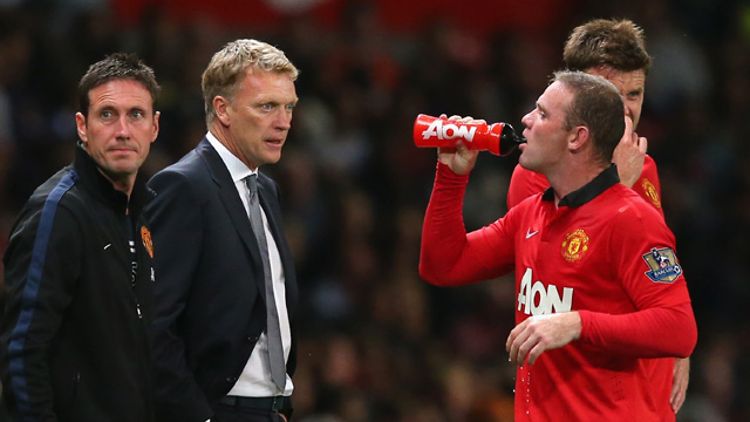 The reason so many people write so beautifully about soccer is that sometimes it’s only in the writing that a game as dull as yesterday’s Manchester United–Chelsea match, which ended in a 0-0 draw, can live up to its potential. The sad fact of the matter is that the 90 minutes that United and Chelsea spent on the field were the least interesting part of the histrionics surrounding the game.

Even from a tactical standpoint, the biggest surprises happened before kickoff. David Moyes’s inclusion of Wayne Rooney in the starting lineup added further drama to the will-he-or-won’t-he saga that has surrounded both clubs. On the other side of the ball Jose Mourinho opted for Andre Schurrle as a striker, the third one Mourinho has selected in three games (none of whom, somehow, has been Romelu Lukaku), and decreed Juan Mata fit enough only for the substitutes’ bench after his midweek start. All of which created plenty of intrigue, which then went to waste as both settled into an extremely conservative tactical stalemate.

The Manchester United performance was a familiar one for anybody who has watched how Moyes approached big games at Everton. United’s midfield was clearly instructed to play the conservative brand of attack that became a Moyes hallmark at Everton: recycle the ball to the fullbacks, work it up the wing, and then put in a cross. The top four pass combinations in the game were between United’s central midfielders playing to each other and to the fullbacks, and the fullbacks playing the ball up to the wings, rather than central midfielders Michael Carrick and Tom Cleverley looking to play the ball up the field themselves.

Unsurprisingly then, Manchester United sent in a ton of crosses from both sides, putting the ball in the box 25 times, only converting on four, and creating a grand total of one chance. Despite taking 12 shots, United didn’t create many good chances anywhere on the field. Their seven attempts from inside the penalty area are a little skewed, as they only had four up until the 87th minute, with the last three coming in a crowded penalty area and not really threatening Chelsea at all.

It’s hard to fault Moyes for taking a conservative stance against one of his team’s two biggest rivals during the second week of the season, even at home. It probably wouldn’t be notable at all if it wasn’t for his history of such approaches with Everton. While on the blue half of Merseyside, he was given the benefit of the doubt because he was making the best of limited resources. For now, he gets the benefit of the doubt at United because Chelsea and Manchester City are the only two clubs against whom a draw is not an extremely disappointing outcome at home. But part of what you sign up for when you manage Manchester United is not getting that benefit of the doubt for very long. If Moyes sends his players out in a similar fashion against teams even slightly further down the pecking order, like Arsenal or Tottenham, the natives will certainly begin to get a little restless.

Chelsea, if it’s even possible, displayed less attacking ambition than United did, mustering only two shots inside the penalty area and eight total.

The choice to start Schurrle, in retrospect, seems designed to provide Chelsea an extra defensive body, rather than an innovative attacker. Schurrle, who is more comfortable as an attacking winger, was completely isolated up front, but gamely inserted himself between United’s central defenders and Carrick when out of possession, making it harder for United to transition into their attack. If Schurrle’s deployment had been for attacking purposes then Chelsea would have looked for their front four attackers to move fluidly, taking advantage of his ability to interchange positions with any of the attackers behind him. But instead Eden Hazard and Kevin De Bruyne stayed quite faithfully to their wings, seldom coming inside, or combining with each other.

Rather than operate as creative hubs, they spaced the field and defended the flanks.

The interesting thing about Chelsea, to the extent that there was anything even a little bit interesting about this game, was how Oscar was deployed. Unlike the wingers, Oscar moved around the field quite a bit. Nominally an attacking midfielder stationed between De Bruyne and Hazard, Oscar actually occupied two roles in Chelsea’s attack. The first was fairly standard for a modern attacking midfielder. His job was to drift from wing to wing in order to combine with Hazard or De Bruyne and create mismatches. Mourinho employed Mesut Ozil in that role all the time at Real Madrid and turned the German playmaker into a superstar. And while that was part of Oscar’s role here, it didn’t produce much excitement as United had their wingers (and Rooney) tracking back to negate any numerical advantages. Sometimes that’s not enough against a committed offensive team, as either a central midfielder or the opposite side winger will close in to increase the advantage, but Chelsea spent most of the night unwilling to commit those numbers forward, instead choosing to remain balanced and conservative.

The second role Oscar played was a little less conventional, and it’s a Chelsea tactical tick that bears keeping an eye on as the season progresses. Frequently Oscar would drop back deep into the midfield to receive the ball and initiate the attack. That’s not entirely unusual for a team’s playmaker. Often, even if a team is playing with two central midfielders, as both United and Chelsea were, those midfielders will get pressured and the central attacker will drift toward the center circle to pick the ball up. Rooney did it a number of times for United on Monday. What was interesting was that, instead of turning and moving upfield with the ball, Oscar would instead often remain in a deeper midfield position and allow Frank Lampard to exchange with him and advance into the attack. While it ultimately didn’t affect this game much, it could be a very effective plan of attack for Chelsea as the season progresses. It’s a way to ensure that, despite being deployed primarily as a deep-lying midfielder, Lampard still has ample opportunities to do what he does best: show up in the box and score goals.

This is a heck of a lot of responsibility to put on Oscar, who is only 21. The fact that he seems to be getting the keys to the team from Mourinho also probably has a lot to do with the persistent rumors that Mata is available for the right price. This remains ridiculous since Mata was perhaps the best player in the Premier League last year, but it does seem likely that Oscar will be permanently handed the central role with Mata moved out to the right side that De Bruyne occupied yesterday. Mata should thrive there, because he is awesome at kicking the ball, but it’s definitely a shift in the hierarchy of the Chelsea squad, and one that it would be understandable for Mata to not be thrilled with.

All of which brings us back to a cagey, cautious, and other synonyms for boring affair on a Monday night in Manchester. The game was dull, but that doesn’t mean it didn’t suggest some interesting things about the season to come. For Moyes and Manchester United, the question becomes just how conservative can fans expect their new manager to be? At Chelsea there are hints that Mourinho may have found a new muse in Oscar, but what that means for Mata, and how the team shapes up as a whole remains to be seen.