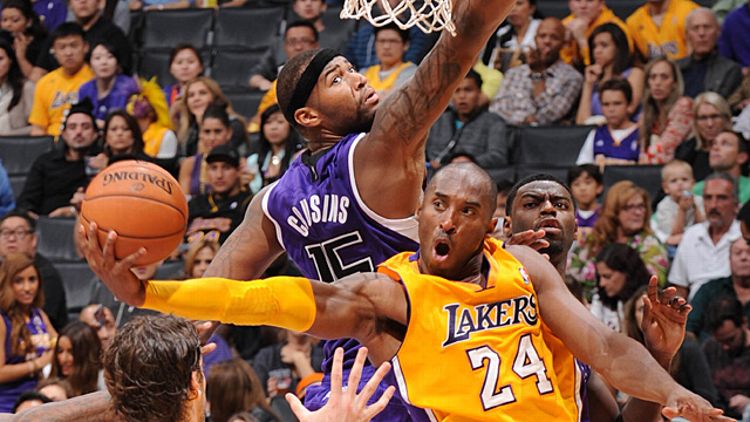 This is the first installment of BOOGIEWATCH, the Triangle’s running series on the NBA’s most compelling, hilarious, and huggable power forward. We will tally all things Boogie, a list that includes dirty looks, headbands thrown in disgust, defensive indifference, first-quarter fouls, moments of brilliance (Motivated Boogie edition), and moments of brilliance (Unintentional Boogie edition).

It is also the first installment of WOOBLY Watch (Wild or Off-Balance Late-Game Yowzers!), our attempt to celebrate every wild or off-balance late-game yowzer that Kobe Bryant throws up in 2012-13, our year of the great teammates.

Last night’s preseason win against the Lakers brought us all the Boogies at once. He started the game with an ill-advised, off-balance jump shot from the top of the key. According to Synergy Sports, Boogie shot 36 percent on jumpers last season, good for 0.72 points per possession. Not great. There’s a school of thought that would have Boogie completely abandon those jumpers and work exclusively down in the post, where his quick feet and bulk give him a natural advantage. But Boogie’s not really even that great down low — he put up only 0.79 points per possession in post-up situations last year and shot only 53 percent from within the restricted area. (Some context: Dwight Howard shot 72 percent inside the restricted area in 2010-11. Greg Monroe, who sits his ass down in the paint more than Boogie, shot around 58 percent.) When he’s up against a bigger defender, like he was last night against Pau Gasol and Dwight Howard, Boogie has a tendency to get caught under the basket, where he often gets his shot blocked or gets forced into throwing wild passes back out to the perimeter. (This too happened on several occasions last night.)

Honestly, the best Boogie will be the Boogie who figures out how to knock down the mid-range jumper with some consistency. This will open up driving lanes to the hoop and will allow him to develop a face-up game that will best use those quick feet.

Last year, one of Boogie’s biggest bugaboos came from early foul trouble. It seemed like every time he was matched up against a bigger opponent, he’d hack his way out of the game. Last night was no different. Boogie picked up two fouls in the first quarter, sat for much of the second quarter, and picked up two more by the 1:06 mark. He picked up those four fouls while running around confused on defense as Pau and Dwight threw alley-oops and backdoor passes to one another. But true to form, Boogie didn’t let all those fouls deter his aggressiveness in the third, when he took four shots, threw the ball out of bounds a couple times, and scored six points.

After sitting out the first half of the fourth quarter and seeing the Lakers climb back into the game, Boogie stormed back onto the court with 7:19 left in the fourth. He immediately missed a jump shot and picked up his fifth foul on an iffy charging call. But with 3:27 left in the fourth and the game tied, Boogie threw down his headband, screamed, “Screw you, bloggers!,” and took over the game. He made three of the Kings’ last four shots from the floor, grabbed a huge offensive rebound, and sank the game winner. With Pau guarding him on the block, Boogie turned and beat Pau to the rim, laying the ball up off the glass just a split-second before Dwight could swing over and block it.

The bucket put Sacramento up 93-92 and highlighted exactly what Boogie can do when the defender respects that mid-range jumper (although to be fair, there was no reason for Pau to respect that shot in that situation). After Steve Nash missed a jumper with 20 seconds left, Cousins went over to Jimmer Fredette, slapped him on the ass and said, “This is free-throw time. I believe in you,” and walked off the court with two middle fingers raised high up in the sky. (OK, not true, but it’s what the scene looked like in my head.)

This, of course, set up WOOBLY Watch, in which everyone at Staples collectively wondered if having Dwight Howard and Steve Nash on the court would deter Kobe from taking a WOOBLY as time expired. Over Internet chat, I remarked to our very own Robert Mays, who was sitting courtside, that it was time for Kobe to let Dwight and Nash know whose team it was. And in Kobe’s world, ownership means that nobody but Kobe is taking that WOOBLY. Kobe, of course, obliged by taking not just one terrible, off-balance 3-pointer, but TWO, as Nash stood idly by in his low-top sneakers and fluffed hair and thought, “Well, it’s just preseason. Maybe he’ll learn to trust me by the playoffs.”

No. Steve, he is never going to pass you the ball like that because there’s no commercial where Michael Jordan passes the ball off to John Paxson while that guy sings “Sometimes I dreeeeeaaaaam …” We just reference it as “the one time MJ passed at the end of a game.” Kobe already did that last year when he passed the ball once to Andrew Bynum (a play for which he took all the credit), sparking two weeks of “Kobe trusts Andrew Bynum” talk over local Los Angeles sports talk radio. Kobe doesn’t need “Kobe Trusts His Teammates Part 2.”

He needs more WOOBLY. And it seems that WOOBLY is what we’re going to get.