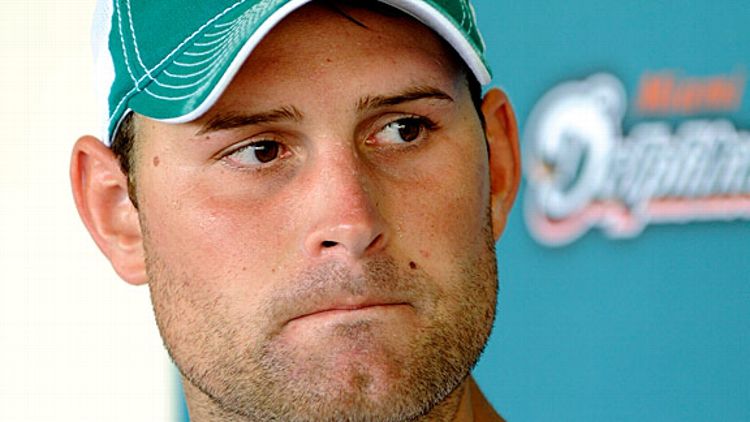 “This is the saddest story I have ever heard.” That’s the first line from Ford Madox Ford’s novel, The Good Soldier. It’s about a disintegrating marriages in early 20th Century Europe. I am going to write a new version of that novel, using the same first line. It’s going to be about Chad Henne and his disintegrating career.

Most people, more specifically, most athletes, probably walk around Miami and are like, “Mama, I made it.” Chad Henne walks around, sees the Art Deco buildings, beautiful women, and members of the Maybach Music Group, and he is like, “I am in an emotional Gulag from which I will seemingly never be paroled.”

Last season ended pretty craptastically for the Michigan alum, when he was benched twice (2-ice!) in one (1!) game for Tyler Thigpen (Thigpen!). Whatever hopes Henne had that this season would be a new beginning were quickly dashed when, during a scrimmage at the beginning of August, Miami fans began chanting for then-on-the-trading-block Denver quarterback Kyle Orton.

Leaving aside the fact that Dolphins fans chanting “We want Orton!” is pretty much like going to an Arby’s and chanting, “CHICCCKKKKK FILLLLL AAAAAAA,” Henne was actually very measured and considerate in his response. “There’s guys in the locker room that have my back and believe that I’m one of the leaders on the offense,” he said.

This is both very cool of Henne to not throw a tantrum and also a little bit untrue. At least one guy in the locker room, or very recently removed from the locker room, did question Henne’s leadership skills. Take it away, former Miami Dolphin Channing Crowder:

“He hasn’t really proven anything to me while I played with him and now being on the other side, looking down as a fan, he’s not impressing me, either,” said Crowder, who recently left the NFL for a career in the media and a side-gig in undermining dudes.

It should be noted that Crowder has some lingering beef with the Dolphins organization and, in the same interview (given to WQAM), Crowder was equally catty about Miami GM Jeff Ireland.

Still, though, it’s not good news for Henne, who has to wonder if Crowder is expressing what other Dolphins are thinking. Henne should take some solace, though. It doesn’t sound like there’s much competition for his job. With Orton looking like he’s going to play in Denver for at least one more year, the only challenge to Henne’s QB1 title would come from the recently acquired Matt Moore, who sounds like he’s less than totally amped about being the starting quarterback, “The competition is always going to be there. … So hopefully I’ll be ready if and when my number is called.” Settle down, Braveheart!

You can’t really blame him, can you? With fans and (former) teammates second-guessing you and crying out for gladiators like Orton to rescue them, who needs the headache of starting for the Dolphins?