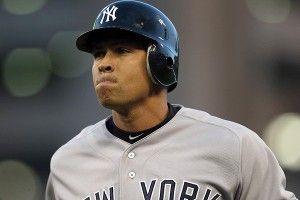 A Miami New Times article reports that six MLB players purchased a variety of drugs from Miami-based antiaging clinic Biogenesis, marking the latest jolt for a sport that’s gone from willful compliance to zealotry when it comes to PED suspicions.

The article lists Alex Rodriguez, Melky Cabrera, Bartolo Colon, and Yasmani Grandal among the players who allegedly bought performance-enhancing drugs from the clinic and its former proprietor, Anthony Bosch. These allegations are the result of a three-month investigation by the Miami New Times, where the focal point of the evidence is a spreadsheet kept by Bosch, said to contain a list of his clients, and a stack of notebooks found by Juan Garcia. The article notes that Garcia was a former client of Bosch’s who invested in the clinic. Rodriguez admitted in a 2009 press conference that he’d used PEDs years earlier while playing with the Texas Rangers, at a time when said substances weren’t specifically outlawed by Major League Baseball. Cabrera, Colon, and Grandal were all suspended last year for violating MLB’s drug policy. We’ll get to their cases later.

The other two active major leaguers named in the article, Gio Gonzalez and Nelson Cruz, had never been publicly linked to performance-enhancing drugs before publication of the New Times piece. The mention of Gonzalez, in particular, is jarring, given the screaming lack of evidence he did anything wrong and the guilt by association he’s now forced to endure.

A look at the substances that Gonzalez supposedly bought from Bosch:

Gonzalez’s name appears five times in Bosch’s notebooks, including a specific note in the 2012 book reading, “Order 1.c.1 with Zinc/MIC/ … and Aminorip. For Gio and charge $1,000.” (AminoRip is a muscle-building protein.)

As Chris Mottram and Jack Kogod noted, none of the substances claimed to have been sold to Gonzalez appears on MLB’s banned substance list [PDF] — not zinc, MIC (Methionine, Inositol, and Choline), or any of the ingredients in the product known as AminoRip. Gonzalez recently tweeted that he’s never met Bosch nor taken PEDs of any kind.

Gonzalez’s father, Max, acknowledged going to Bosch in an effort to lose weight, but denied any connection between his son and Biogenesis’ head man. And yes, we’ve heard similar statements in the past from the father of admitted PED user Andy Pettitte. Still, even if there were a connection and even if Bosch’s notebooks constitute the smoking gun, Gonzalez would be left defending himself against unsubstantiated allegations that he took a series of substances that are legal by both FDA and MLB standards.

As is, Gonzalez faces the possibility of being stigmatized for years because of this report. He could make less money in his next contract or have award votes go against him in the future, because of niggling (and unfounded) suspicions that he’s a cheater. It’s a huge long shot given his age, but if Gonzalez were to reel off a string of 20-win seasons over the next decade, he’d get Hall of Fame consideration but also Hall of Fame doubt, the kind that has left clearly worthy but suspected players like Jeff Bagwell still waiting for the call. At the very least, Gonzalez is likely to get taunted by fans in opposing ballparks; most players develop thick skin, but as things stand now, there’s no reason for Gonzalez to have to endure steroids-related chants every time he hits the road.

This is what happens when baseball goes from a need to watch tape-measure home runs to a quest to learn the terrifying truth, innocents be damned. We’ve reached the point where both previous offenders and first-time accuseds are subject to intense scrutiny in the face of weak, or even nonexistent, evidence. If you were a bored receptionist at an antiaging clinic, you could call TMZ one morning, tell them you saw a guy who looked kind of like Bryce Harper walk in, and have a firestorm erupt by lunchtime.

Such challenges might be inevitable when trying to strike a balance between vigilance and respect for due process. Finding that balance gets even tougher, given how subjective different people’s views are when it comes to baseball’s attempts to tackle the PED issue. The New York Times reported that an ongoing MLB investigation into Biogenesis stemming from Cabrera’s suspension last year predated the Miami New Times’s own research, and that baseball is aggressively pursuing leads related to the clinic that might result in clearer and more widespread findings of PED use. An optimist could look at such investigations, and baseball suspending players for positive tests, and conclude that the league is doing its job, taking proactive steps to keep the sport as clean as possible. But pessimists could easily counter that such findings mean that the steroids epidemic is alive and well, and that MLB has learned nothing from the past.

In fact, that’s exactly what happened in various corners of baseball’s media. SB Nation’s Rob Neyer detailed how MLB Network analysts spent hours debating the topic of PED punishments, the overwhelming consensus holding that the current system isn’t enough of a deterrent and that penalties should be made stiffer, since … well … look what’s going on. It’s certainly possible that more severe penalties would serve as a greater deterrent against would-be users. But that theory ignores the likelihood that existing penalties — a 50-game suspension for first-time offenders, 100 games for second-timers, and a permanent ban for third-timers — are already discouraging players from using. And that players getting caught or even looked at more closely might be a result of the league testing more effectively and pursuing leads more aggressively than it has in the past, rather than a sign of rampant PED use throughout the game.

Rodriguez, who denied his involvement with Biogenesis in a statement sent to the New Times, should be evaluated with more scrutiny than zero-time offenders in the aftermath of his 2009 admission of prior PED use. But the fact remains that he has been subject to the league’s drug-testing policy, and hasn’t failed any tests they currently have. Yes, it’s worth noting that this season will be the first time MLB will test for HGH throughout the season. MLB’s investigation is far from over, but until it is, even A-Rod deserves to have more substantial evidence brought against him before the knives come out.

Instead, we get universal trampling on the Jump to Conclusions Mat. The big headlines late Tuesday revolved around the Yankees’ attempts to void the rest of Rodriguez’s contract. If you close your eyes and think real hard, you might be able to conjure a justification for voiding the remaining five years and $118 million the Yankees owe A-Rod, should the current allegations of PED use prove true. In reality, the Yankees aren’t wiggling out of anything. The collective-bargaining agreement contains very specific language relating to PED suspensions, none of it remotely allowing a team to tear up a player’s contract. But the Yankees will likely press on in their efforts anyway. If A-Rod made less money, were healthy, and still putting up MVP numbers, they wouldn’t make a peep. But because A-Rod turns 38 this year, his body’s breaking down, and he appears to have little left in the tank, suddenly he’s somehow gravely offended his employers.

Major League Baseball released a statement on the New Times article, confirming its own investigation and adding, “We will refrain from further comment until this process is complete.” While the league’s official stance appears to convey a patient approach, Yahoo’s Jeff Passan quoted an anonymous MLB official who wasn’t nearly as diplomatic: “This is BALCO all over again.”

No, it isn’t, at least not now. The evidence in the BALCO case was much stronger, with multiple simultaneous investigations by the federal government revealing far more iron-clad findings, true smoking guns. Here, we’ve got an exhaustive investigation by a journalist, and a thorough one by the league, both leaving many questions that still need to be answered.

Baseball’s Joint Drug Agreement [PDF] does allow the league to suspend suspected PED users based on “just cause.” Five years ago, MLB suspended Braves outfielder Jordan Schafer for HGH use without a failed drug test. At the time, MLB spokesman Mike Teevan justified the suspension by saying, “We have non-analytic means of identifying players. He falls under that category.”

Whatever “non-analytic” means or whatever “just cause” might’ve existed in Schafer’s case, the same cannot be said for baseball’s latest allegations, at least not yet. We need to learn a lot more here before casting judgment, much less contemplating punishment for those who may or may not have been involved. Anything less would violate every notion of due process.