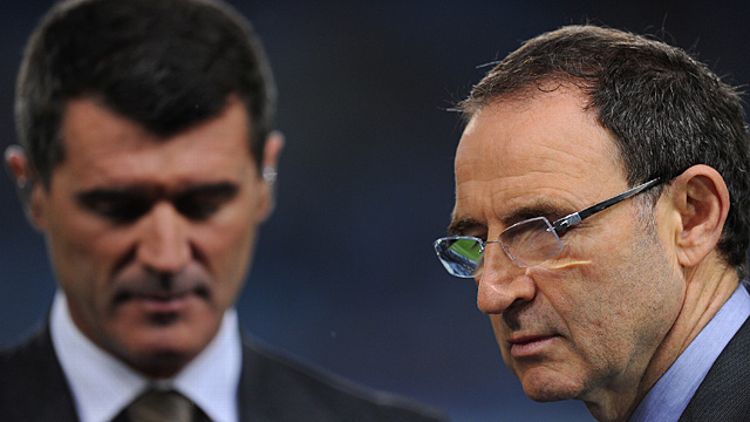 For those of you who have given Ireland’s World Cup qualifying campaign a miss, you didn’t miss much. Ireland, under Giovanni Trappatoni, may have gotten within a Thierry Henry handball of the 2010 finals and qualified for last year’s European Championships (where they didn’t get out of the group stages), but the popular perception of them as a side slowly deflating from international relevance was compounded by a thoroughly indifferent World Cup 2014 campaign.

After a defeat against Austria that effectively ended Ireland’s slim chances of qualifying, kindly/mean old “Trap” was discreetly relieved of his duties in September. And then from nowhere, the Football Association of Ireland, an organization previously best known for starting the trend for management by birth certificate (Jack Charlton, the one-time English boss of Ireland, spent much of the late 1980s digging up proof of Irish ancestry for middling English players) and otherwise generally treating the proximity to top-flight soccer as an excuse to sit up front on the plane, produced an unlikely masterstroke. It appointed Martin O’Neill — he of the esoteric quotes and acerbic TV punditry — as manager. And then it appointed its own most vocal critic, Roy Keane — he of the career-ending tackles and acerbic TV punditry — as his assistant. (It’s the assistant bit that kills me; the other way round and this just isn’t half as potentially entertaining.) The fact that both men cut their teeth as players under Brian Clough, the greatest England manager that never was, just adds another great layer of backstory to what was already the best premise since Sharknado.

The legendary Nottingham Forest manager Clough had a habit of teasing local beat reporter Duncan Hamilton about his reading habits, then borrowing books from him. On one occasion he gave Hamilton a vague second-hand description of Ulysses to find out the author’s name, because he wanted to compare his then-player Martin O’Neill to another Irishman nobody could understand.

And now O’Neill is the new manager of the Republic of Ireland, with the delicious kicker that his assistant is another Clough protégé, one Roy Keane. Ladies and gentlemen, release the popcorn.

Those who approve are calling this “the dream team” — though it’s hard not to see them as “the odd couple.” Certainly news of O’Neill and Keane’s arrival has revived interest in the Ireland team, after nearly half a decade of Trappatoni sending out sides in formations so negative it was clear that he didn’t think they could win against any team ranked higher than them (they didn’t). O’Neill and Keane are unlikely to accept such passionless real-politicking — as O’Neill put it when asked if he’d be the good cop to Keane’s bad cop:

While both men are linked by the dubious distinction of having managed Sunderland — indeed, by having their careers near permanently derailed by managing Sunderland — it’s the connection to the idiosyncratic disciplinarian Clough that has had many in Ireland excited about this appointment. Those who aren’t watching through their fingers, that is. The volatility of Keane alone is an extraordinary element in the mix, before you get to O’Neill, who once described himself thus: “I am full of anomalies, ironies, paradoxes — downright contradictions to be perfectly honest.”

Keane has had unlikely bosses before, of course. His arrival at Sunderland was contingent on a face-to-face meeting with then–club chairman Niall Quinn, whom he’d disparaged in the wake of his infamous Saipan walkout from the World Cup in 2002. More on that in a moment.

But to go back to Clough, what did the cerebral O’Neill and the brooding Keane (to pluck two of the most popular adjectives for these two at random) learn from him? A variety of techniques for butting heads, for one. As his manager, Clough would regularly engage in drawn-out, stand-up debates with the equally stubborn O’Neill, as the former law student stood his ground on some obscure point of order on the training field. By the time Clough later managed Keane, O’Neill had possibly exhausted his former boss’s already limited supply of diplomacy. Keane he just punched.

There is also a remoteness to Clough that’s discernible in both O’Neill’s and Keane’s managerial styles, which makes O’Neill’s “bad, bad cop” remark intriguing as more than a throwaway line about their reputations as disciplinarians. Rather, it suggests another type of redundancy in their partnership. After Clough’s split with assistant Peter Taylor — the man who identified and cajoled the personnel that won Clough most of his trophies — Clough was never as successful again, and over time became an increasingly isolated figure at Nottingham Forest, observing training from a distance rather than taking it.

O’Neill seems to have picked up something of this remoteness as his career has gone on. Through his early successful club managerial career he had his own “Taylor” in John Robertson, his former Forest teammate, who Clough once described as “fat, unshaven, dressed like a tramp” (he revisited a variation on this line on occasion, to taunt the opposition with visions of who was about to run rings round them). Robertson, notably, didn’t come to Sunderland with O’Neill, and the lack of an “arm around the shoulder” guy was notable during his reign there.

So will Keane be that “arm around the shoulder” guy? Yes — though the arm will then bend tightly and push down viciously to yoke its target, if the popular perception of him as a firebrand and bully is to be believed. In reality, Keane’s “paradoxes” are as numerous as O’Neill’s, but he’s hardly what you’d call a people person by any stretch of the imagination. He too ended his reign at Sunderland as an isolated figure. It was Keane’s scheduling habits that were the first point of friction with Sunderland owner Ellis Short. A bristling Keane would later recall how the new owner texted him one weekday wondering where he was.

Keane of course, has gone missing before, though always as a point of principle in his eyes. There was the rant on MUTV that ended his Manchester United career, and of course the fight with Mick McCarthy that presaged his walkout on the Irish time in Saipan — after which he lost few opportunities to disparage the “bluffers” who ran Irish soccer and their failure to prepare seriously for a World Cup. The fact that he will now be working for those same “bluffers” is mind-boggling. His quixotic stand split the country along what felt like civil war lines — with the establishment FAI and Keane the protagonists. Now, more so even than O’Neill, they’re his bosses. I hope they’re ready for rogue cops.