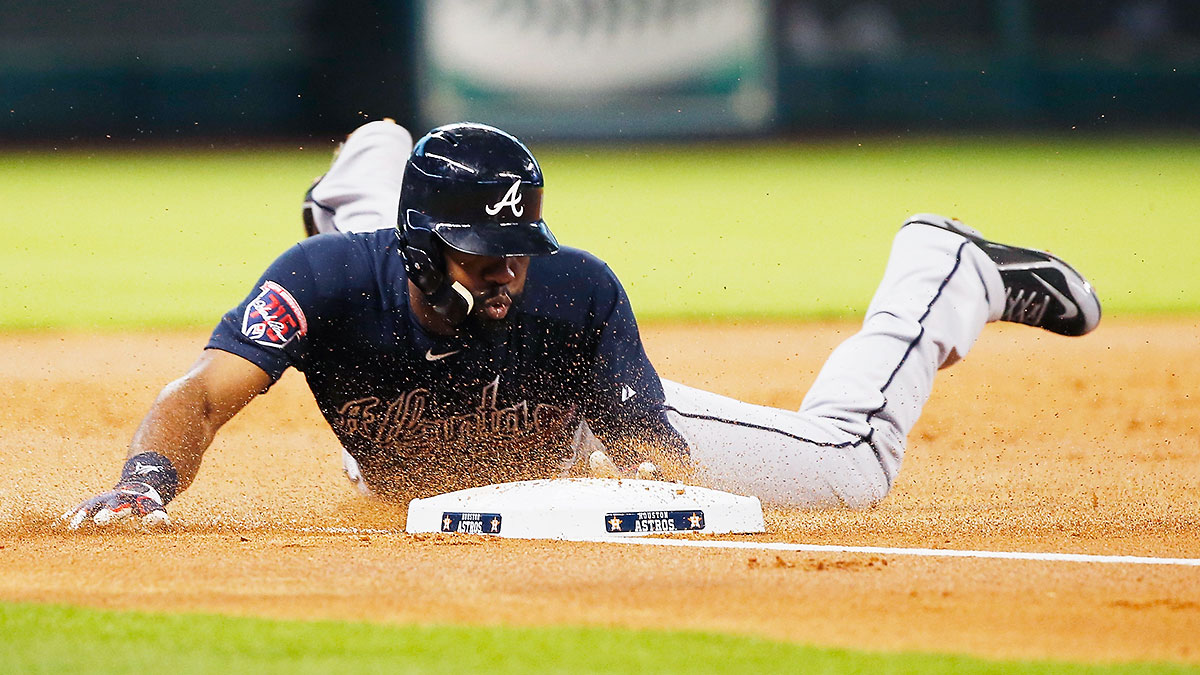 There was a moment after the 2010 MLB draft when four NL East teams suddenly had a young right fielder who was either in the majors or on the way there, and who was expected to one day challenge for MVP awards. Division partisans were supposed to argue about Jason Heyward, Giancarlo Stanton, Bryce Harper, and Domonic Brown the way New Yorkers once argued about Duke Snider, Mickey Mantle, and Willie Mays. Four years later, we have a pretty good idea of how we should feel about each of these modern-day players: The mighty Giancarlo Stanton is already at that MVP level. If Harper’s not there yet, it’s only because of his puzzling ability to find, collide with, and injure himself on physical obstacles while playing a game on a flat, open field; but he’s a 21-year-old two-time All-Star, and insofar as those exist, they tend to go on to have good careers. Brown, meanwhile, is being mentioned by name in therapy sessions throughout the Delaware Valley, and since he’s by far the oldest and least accomplished of the quartet, he has just about run out of chances to make the jump to stardom.

But what about Heyward? He hit .277/.393/.456 as a 20-year-old in 2010, which was, at the time, the second-highest OBP ever for a rookie that young, right between Ted Williams and Frank Robinson. I bring up that fun fact all the time, because it has colored everything I’ve thought about Heyward since. Heyward, who just turned 25, is in his fifth full season in the major leagues, and he’ll be up to about 25 WAR once this season’s over, which is a pretty good down payment on the 60-win threshold that usually signifies a Hall of Fame career. He’s an above-average hitter, the best defensive right fielder in baseball, and a good baserunner for someone who’s the same size as DeMarcus Ware. In terms of the production you’d want to see from a mid-first-round pick, Heyward’s already a tape measure home run, and he’s still just getting started.

Which raises the question: Is it OK to be kind of disappointed in him?

Given his age, athleticism, and production as a rookie, you’d expect Heyward to be, if not the best all-around player in the game by now, then at least close to it. Part of his failure to manage that isn’t his fault, because Mike Trout came up full-time two years later and worked his Bonds-on-Griffey-style comparative disappointment voodoo on every good young player in both leagues.

The other part, though, stems from Heyward’s style of play. I was thinking a while back about which MLB player’s style of play least matches the style of play we’d expect from someone who looks like him, and Heyward might be the answer. Heyward is roughly the same size as TMGS, who’s a pretty good defensive right fielder and an underrated base runner, with 13 steals in 14 attempts this year. But you’d expect a player that size to hit for elite power, which TMGS does and Heyward does not. You’d also expect a normal player’s power to increase as he grew stronger and more savvy with age. That’s what’s already happening to Trout, and it happened to Miguel Cabrera, whose home run totals stayed constant as the run environment swung back toward pitchers. But apart from a 27-homer 2012, Heyward has hit in the mid-teens for home runs and the mid-20s for doubles pretty much every year. I don’t know why. It’s certainly not because of a lack of strength, though intermittent injuries, such as a busted shoulder that caused him to mess with his swing throughout 2011, have periodically thrown him off his game. I do know that while Heyward’s .390 slugging percentage in 2014 isn’t awful, it’s below the National League average, even in this new dead ball era. That’s mystifying because, again, Heyward’s a pretty good hitter otherwise, and he’s built like a Soviet apartment block.

Combined with top-notch on-base skills, that slugging mark makes him an above-average hitter and a very good leadoff man, but not the tentpole slugger that Trout and TMGS are, or that we expect Harper to become.

Where Heyward makes up that gap in quality only complicates the question, because defensive metrics have taken a deserved beating recently. Compared to other sports, baseball makes it stupid easy to quantify player value: The primary confrontation, the at-bat, is a discrete battle between two individuals, more like tennis than like other team sports. We know how batters produce runs, and how runs relate to wins, with as much certainty as we could hope. Defense, however, is subject to the same variances that have made it nearly impossible to come up with a public WAR in basketball, hockey, or soccer, and these problems are particularly prominent when it comes to single-season data for corner outfielders. So even if Baseball-Reference.com and FanGraphs weren’t a win apart in their evaluation of Heyward’s defensive value, I still might not trust the number.

Still, we do have enough data to conclude that, over his career, Heyward has been an outstanding defensive player, an evaluation the eye test supports. That might make up for the fact that the power stroke never came, and some defensive metrics say it does, but it’s difficult to really know, which further muddies the question. Baseball-Reference.com says Heyward has been a six-win player this year, but until defensive analysis reaches the level of precision we expect from offensive analysis, it’ll be impossible to know for sure.

And frankly, even if we did, the cosmetic difference between the elite defender with average power and the elite power hitter with average defense would still make Heyward’s career look disappointing, even though he’s been the best player (or close to it) on a very good Braves team from the moment he put on a major league uniform.

I’ve been an enormous Heyward fan since I found out there was a 19-year-old who hit .323/.408/.555 across three levels of the minors back in 2009, and, objectively, there is no reason to find fault with how his career has unfolded. But when you expect something to be transformatively, surreally great, you can’t help but feel disappointed when it only turns out to be very good.