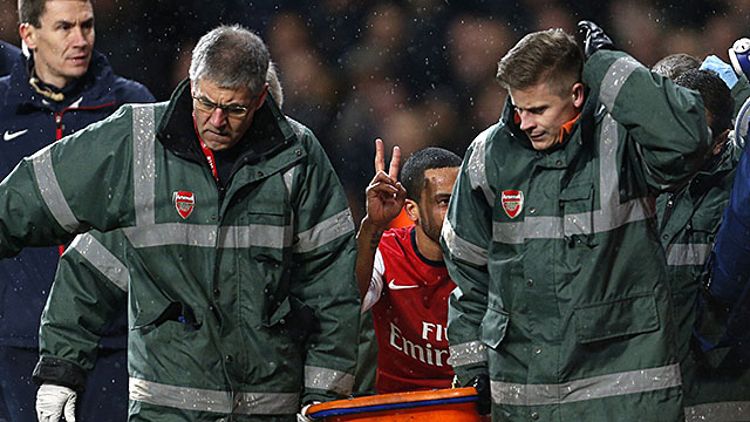 In the waning moments of their 2-0 victory over Tottenham this past weekend, Arsenal saw a key member of their attack carried off the field on a stretcher. He didn’t know it when he was making amusing/taunting hand gestures toward the Tottenham supporters, but Theo Walcott had torn his ACL, ending his season and his hopes of representing England at the World Cup in Brazil. This injury could very well affect the Premier League title race, which Arsenal are currently winning. But despite suffering the blow during a contest with their Premier League rivals, it actually occurred during Round 3 of the FA Cup. This somehow added insult to injury.

Because of its long — 143 years — and proud tradition, the FA Cup is deeply embedded in the culture of English football. To many Arsenal supporters, and English football fans in general, Walcott’s injury will likely be seen as a cost of doing business. With the amount of pride and interest in the domestic cup competition, the idea of “tanking” the FA Cup is taboo. But even for a shrewd accountant like Arsene Wenger, who isn’t alone in having fan pressure affect his approach to the Cup, the risk/reward analysis doesn’t add up. Despite its sentimental appeal, you have to ask where the FA Cup stands on the priority list for teams currently enjoying life in the Premier League. Is even the possibility of losing a player like Walcott worth advancing in the tournament?

In the case of Arsenal in particular, Wenger took a relatively normal risk playing Walcott (and a few other vital members of the Gunners’ rotation) against Spurs. Walcott’s presence helped Arsenal secure their win on Saturday. But unfortunately, for the club, it was a victory that came at a price.

Arsenal are title contenders for the first time in years, and a tough Feburary matchup in the Champions League’s Round of 16 against German juggernaut Bayern Munich is looming. The North London club will now have to cope, at home and in Europe, without a vital member of its squad. Sentimental attachment aside, the Premier League and the Champions League are the competitions that Arsenal should be focusing on. With the renewed competitive balance in the Premier League, it’s extremely difficult, even for clubs with the vast resources of Arsenal, to contend across three competitions (to say nothing of the League Cup). In that light, it’s no wonder Villa boss Paul Lambert recently characterized the FA Cup as more of a distraction than anything else.

Between TV money, gate receipts, and prizes, clubs can take in a decent haul for a deep run in the competition. Wigan, for example, were estimated to have made nearly £4 million — before player bonuses were factored in — with their amazing Cup-winning run last year. But that money, while certainly helpful, is a drop in the ocean compared with the kind of financial windfall that comes with being promoted to or staying in the Premier League, to say nothing of making a run in the Champions League.

Wigan’s dramatic victory over City in the competition was a true David and Goliath moment. But warm and fuzzy feelings aside, that run directly affected the small Lancashire club’s Premier League standing. They won the cup, but were relegated out of the league. They’re 11th in the Championship now. It’s a question of what matters more: present-day standing or memories that fans will keep for a lifetime?

As easy as it is to suggest that clubs should begin to treat the FA Cup almost as an exhibition or a training match for their youth and reserve teams, that’s a tough sell for fans. Cup competitions, ideally, give football clubs multiple narratives to participate in, as much as anything else. Maybe you support a club that’s going nowhere in the league. Maybe you support a club that’s going down. But an FA Cup run gives you something else to believe in. And belief is a very intoxicating thing in football. Belief is what makes it hard for clubs to be logical and measured, which goes against the passionate, somewhat illogical nature of fandom. It’s not nearly as fun to root for common sense as it is for lifting a trophy. Arsenal fans surely were happy to vanquish a bitter foe. Simply conceding that match with an underwhelming starting XI, despite the potential rewards, would have been a tough pill to swallow. So is losing Walcott’s quality. When it comes to the FA Cup these days, it might be time to root for losing the battle in order to win the war.

NFL Divisional Round Pain and Gain