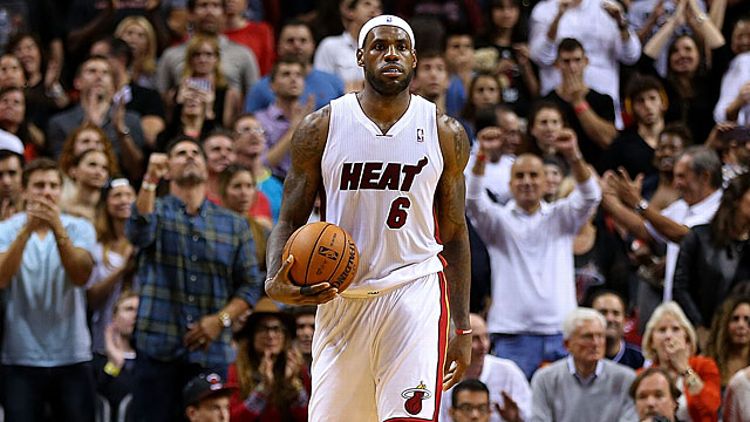 Who are the best shooters in the league this year? Below is the answer, according to the ShotScore metric we introduced earlier this season. Also, I imposed a few criteria: I only considered players who are healthy (which, sadly, disqualified Al Horford, who was having a tremendous year) and have at least 300 field goal attempts (which disqualified the amazing Kyle Korver and the rapidly ascendant Marco Belinelli, who both narrowly missed that threshold).

I always say that the hardest part about shooting in the NBA is actually getting a shot off, something normal people and many NBA players have trouble doing. With that in mind, 104 players have attempted at least 300 shots this year — here are the top-five shooters of that group. 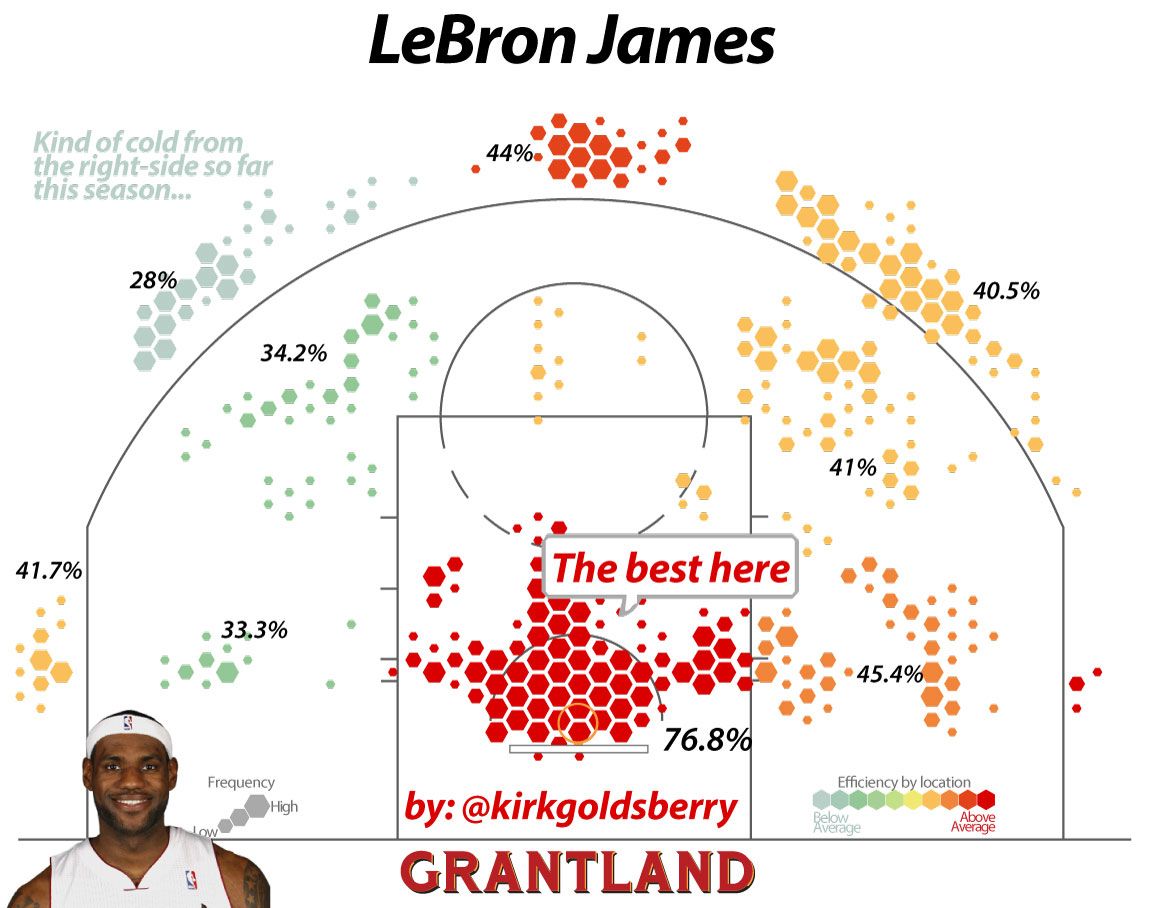 There’s no basketball player on the planet who is better than James. It’s fitting then, that as a scorer, James continues to assert his ridiculous dominance in the league’s most important spot — near the basket. This season, 39 players have attempted at least 200 field goals inside of eight feet. Only one of these players has made more than 66 percent of his shots; that would be James, who has made almost 77 percent of those shots. That’s insane. 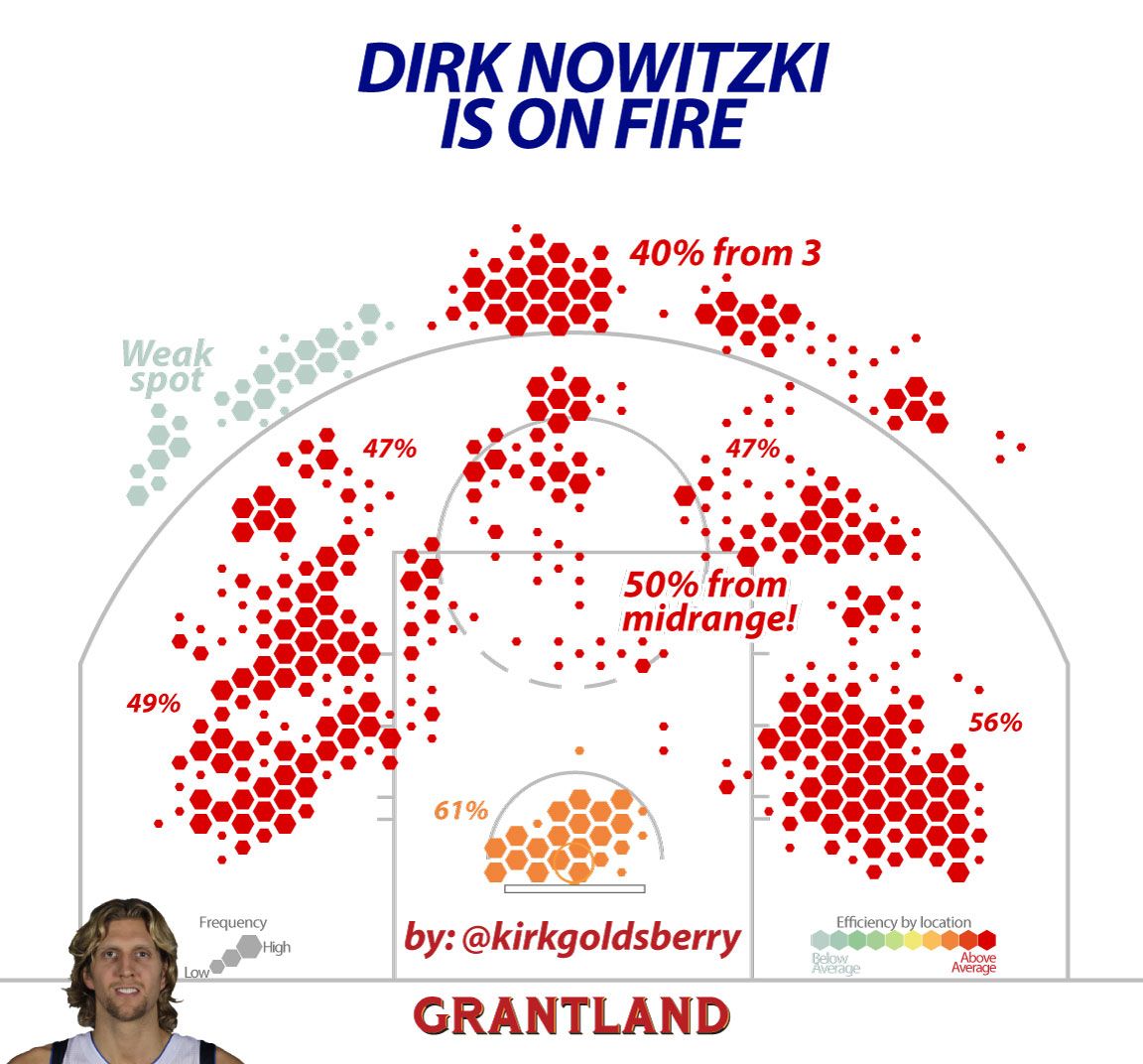 It’s nice to have a full-fledged Nowitzki back in our lives. As you can see, Nowitzki isn’t afraid to shoot the basketball. And, like James, he produces points at incredibly anomalous rates — but unlike James, Nowitizki’s freakish efficiency is away from the basket. He’s been on fire again (figuratively, thank goodness) from midrange. This season, 27 NBA players have attempted at least 200 midrange shots, but Nowitzki is the only one of them making 50 percent of those attempts. What’s crazy is that he is the most efficient midrange shooter in the game despite the high level of difficulty associated with most of his attempts; he constantly creates his own shots in the face of defenders who are expecting him to do that exact thing.

Nowitzki has been awesome in all his usual spots this year but has been the best in the league near the left baseline, where he is making 56 percent of his shots. 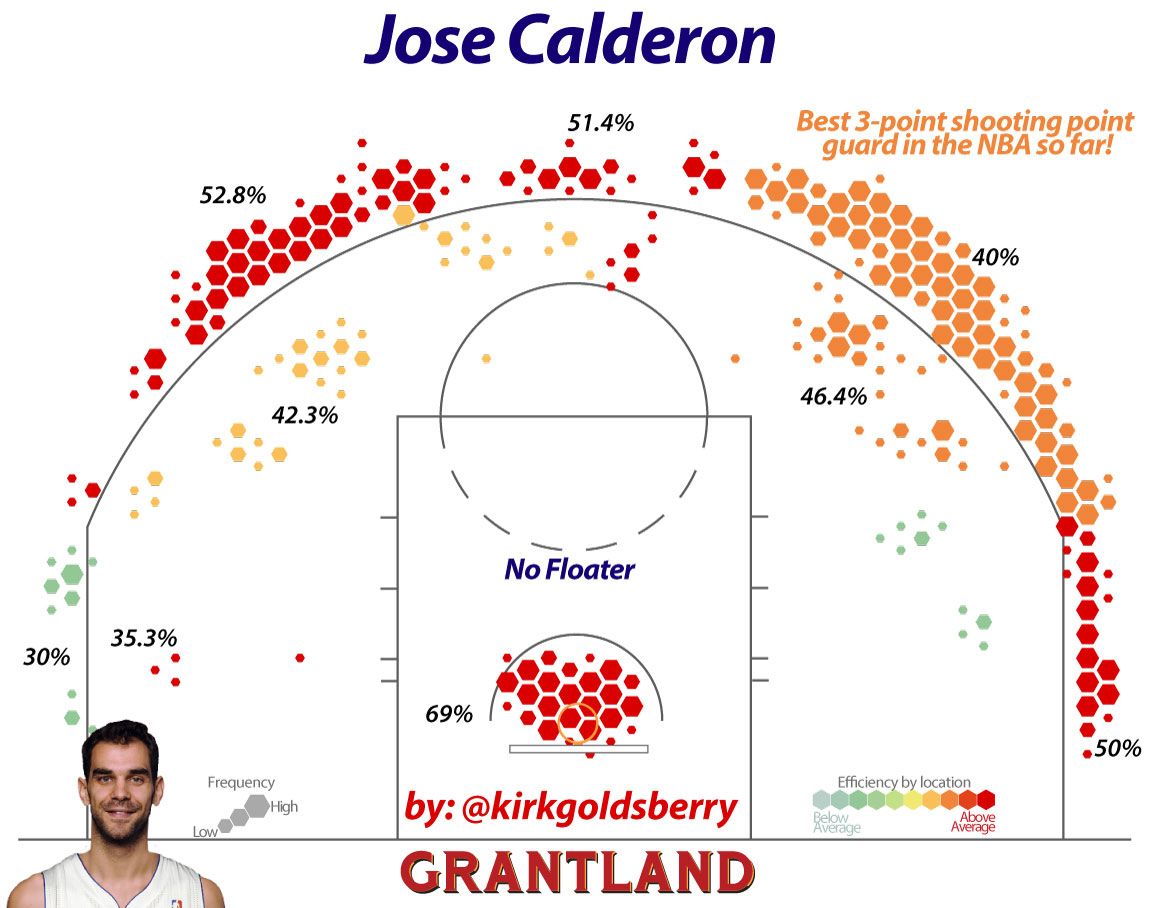 If you love good jump-shooters, than you should be watching the Mavericks this year, because aside from Nowitzki, they also have one of the best shooting point guards in the entire league. No matter what city he finds himself in, Calderon continues to put up extremely efficient shooting numbers. This season is no exception. As usual, Calderon is hitting 3s at crazy rates, and — with all due respect to Stephen Curry (that’s a lot, by the way) — Calderon is the most efficient 3-point-shooting point guard in the league right now. He’s great from everywhere, but especially from the spots you need your point guard to be great from: above the break. He also shies away from midrange shots, and as a result, his shot chart is the kind of thing that makes Daryl Morey drool. 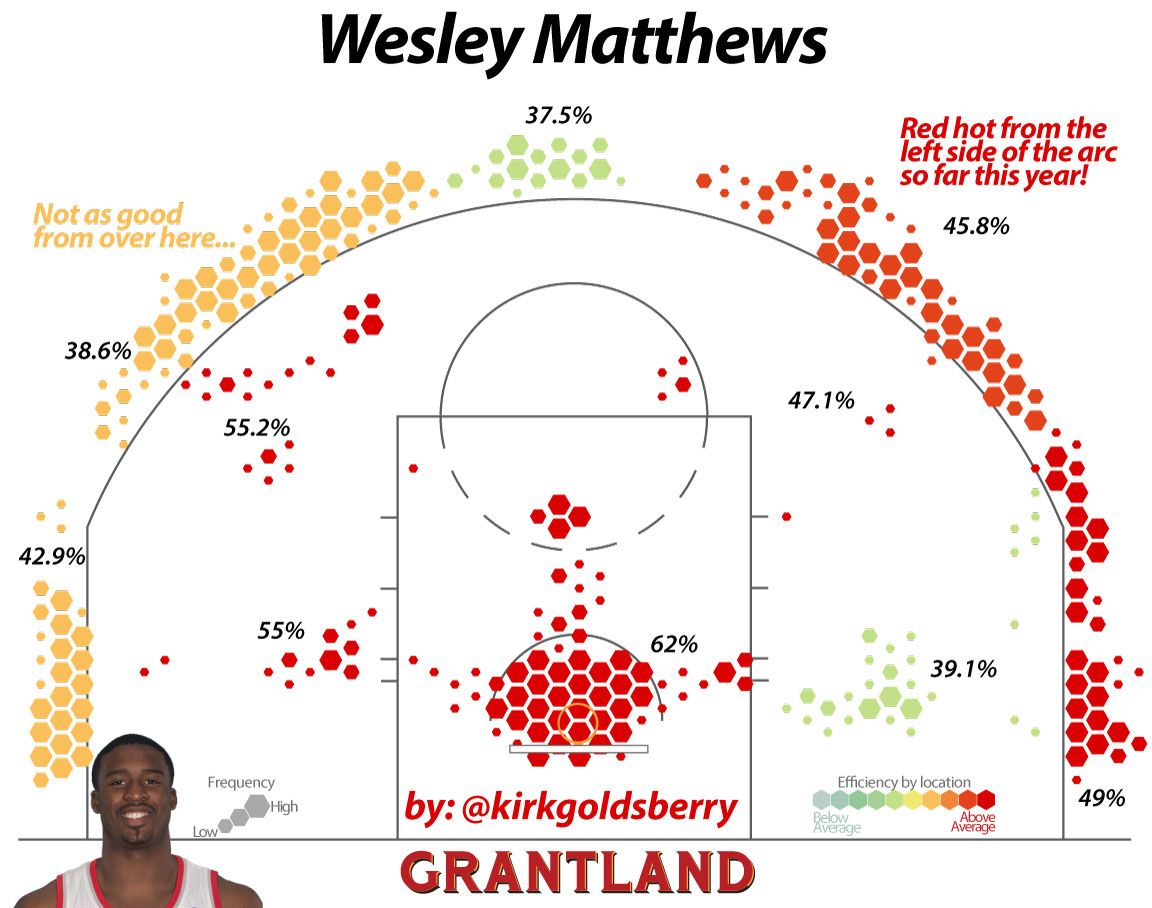 Portland is the best story of the year so far, and one big reason why is its long-range shooting. Matthews is having a fantastic year shooting the ball, and he should be in the discussion for most improved player. Simply put, Matthews has been great beyond the arc, but much of that greatness is along the left wing and in the left corner, where he is arguably the best shooter in the league this year. 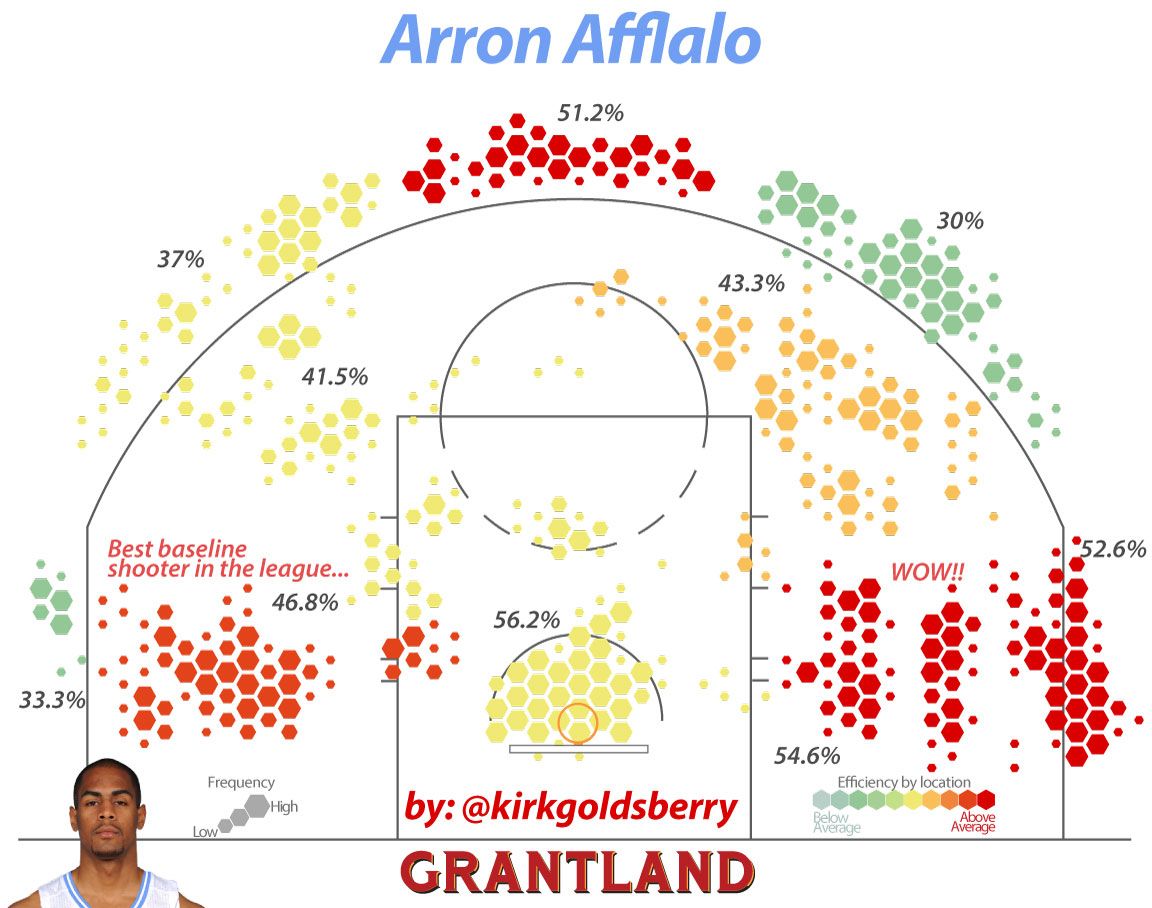 How good could this guy be on a good team? Let’s hope we find out. Afflalo is quietly have a monster shooting year despite playing on the second-worst team in the NBA. He should also make the All-Star team, but his low Q-score and his Orlando address may prevent him from “earning” that accolade. Still, by the numbers — and especially by his relatively cheap contract — Afflalo is one of the best shooting bargains in the world right now, and he’s consequently the subject of a lot of trade talks. In the right uniform, he could be a real difference-maker down the stretch. He can score from anywhere, but he’s particularly great from the baselines in the midrange, where many teams struggle to produce.

According to ShotScore, those are the top five volume shooters in the league. Of course, this is only one way to evaluate shooting and we’re only a third of the way through the season, so this is all subject to change. Many players just missed the cut, so lest you think I overlooked somebody, here’s a healthy list of honorable mentions who are very close to the top of leaderboard: Korver, Belinelli, Klay Thompson, Chris Bosh, Kevin Durant, Dwyane Wade, Curry, and, of course, Gerald Green (WTF!).

Stay tuned for Friday, when we look at the bricklayers.