An Arsenal Fan and an Everton Fan E-mail About Today’s Match, the Champions League, and Money, Money, Monnnney 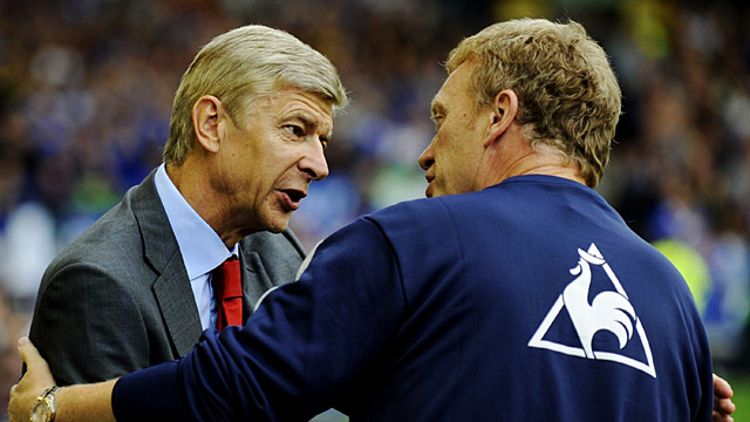 Brett Koremenos: The Arsenal-Everton showdown today has massive implications for the Champions League. Bottom line, if my Toffees can’t even manage a draw, you can kindly wave good-bye as they fade into your rearview mirror. Should they win, however, both our clubs are going to be part of a crazy, four-team chase for the final two spots in the top four. How are you feeling about your club’s chances heading into this match? Or have you not been able to think about it because you’re still mourning the fact that the Andrei Arshavin era is ending this summer?

netw3rk: Rooting for Arsenal has amply prepared me for crazy late-season jockeying for Champions League spots. Or, as I like to call it, “The Arsenal Cup.” So I’m feeling pretty good; Arsenal sits third, one point above Chelsea and Spurs, and four points clear of Everton, entering Tuesday. Still, it is Arsenal, and I’m just as ready for a collapse as I am for a Champions League place.

Koremenos: As an Everton fan, this is a brand-new experience for me. The “Everton Cup” usually consists of a late-season run from the middle of the table to maybe, just maybe, a spot in the Europa League. This year it’s been in the thick of things right from the start. Then, predictably given its limited resources and mounting debt, Everton spent about the same amount in the January transfer window as I did. After its disappointing exit in the FA Cup, my dreams filled with dollar signs and Champions League games were dashed, only to be reignited by the 10 points Everton has grabbed in the past four matches. You have mentioned on Twitter before about that missing out on the cash cow that is the Champions League would only exacerbate Wenger’s already stingy approach to the transfer market. But for a small club like the one I support, that type of money could be a game-changer. We could go from regular top-half-of-the-table finishers to European contenders.

Yet with all that added incentive, I feel oddly at ease for my club’s visit to Emirates. Even though your Gunners have taken all 12 points from their last four matches, and David Moyes has never won away at Arsenal, I am somehow more concerned about Everton’s looming visit to the house of horrors that is Anfield. Which makes total sense, of course, because Liverpool just drew with West Ham and Reading, finding the net ZERO times. Why am I so calm about this game? Is it that Arsenal collapse potential you mentioned? Is Andre Santos making a surprise return to the starting lineup?

netw3rk: Let’s never speak of Andre Santos again. It’s enough that I still have to deal with Gervinho. I’m not at all surprised that you’d be more concerned with the Merseyside derby. I want Arsenal to finish top four, but I need Arsenal to finish above Tottenham to be able to feel whole. To me, it’s also an issue of ambition; Arsenal is run like a corporation, and not finishing in the top four is like Macy’s having a bad Christmas season. Everton has been holding the ship together with Scotch tape and baling wire for so long that finishing in the Champions League would be like some unknown, faraway great-aunt slipping the mortal coil and bequeathing you a bunch of money. Awesome (hey, she lived a long life, died peacefully in her sleep, and you didn’t even know her), sure. But it’s a different situation when you depend on that Champions League cash. Instead of being a nice windfall you can use to get the car fixed or the house painted, you depend on it to keep the lights on.

I actually think Arsenal and Everton are quite similar in terms of circumstance and potential, except Arsenal keeps telling itself it can compete for all the trophies while Everton is realistic about what it is. Both teams have depth issues, but Everton is canny enough to account for it and prioritize the FA Cup. I don’t think it’s an accident that the Gunners have come on late the last two years after being eliminated from the requisite silverware potentialities.

Another way the teams are similar: nonstop transfer rumors swirling around their best players. Does Everton manage to hang on to Marouane Fellaini if it doesn’t finish top four?

Koremenos: You’ll have to excuse me if this next response is a little scattered as I will be writing this while searching Ancestry.com for someone in family lineage who has massive sums of money I could inherit. I would agree wholeheartedly that Arsenal and Everton, and more specifically Moyes and Wenger, share a lot of similarities. I actually go back and forth on how your club is run. The logical part of me (if such a thing exists) thinks Arsenal is a very forward-thinking club by staying out of massive operating debt while paying off its stadium at the same time. The other part of me says that if they miss out on consistently earning a spot in the Champions League by doing so — and losing this upcoming match to Everton could really put them in a bad spot this year and maybe going forward — is it worth it? I guess it comes down to your fundamental belief in what a sports club should provide.

Everton doesn’t even have the depth to make a domestic cup run. When it was forced into a replay against Oldham Athletic, I almost preferred a loss than another match. We were in the thick of the Champions League race. I know this is a minority opinion, and I didn’t grow up in England, so I don’t have the same sentimental feelings toward watching the FA Cup. But when taking into account what it does for a club — which is add to its prestige while offering very little financial reward and a Euro League spot that can do more harm than good — it doesn’t make sense for Everton to even care. I’d happily lose to Oldham Athletic if it means 90 or 180 fewer minutes for players like Steven Pienaar, Darron Gibson, and the aforementioned Fellaini.

And speaking of Belgian Afro King, he is absolutely gone without Champions League football next year. A loss to the Gunners on Tuesday could pretty much pack his bags. Which, honestly, I’m not totally sure is as devastating as people think. Victor Anichebe — to the surprise of everyone — has seemed to finally begin to capitalize on his potential, and Kevin Mirallas is a terror (when he’s healthy, of course). Seeing Felliani go and having that money be redistributed on two or three lesser players, and another top-six finish next year seems like business as usual for Everton.

To turn this around on you, if Arsenal loses, is the Santi Cazorla departure watch officially on? Can your club afford to keep him, and does he want to stay, if there is no Champions League football next year? He is, by far, the player who concerns me the most going into the match, and Moyes will no doubt gear his entire game plan around stopping him with some clever ploy.

netw3rk: Cazorla has been fantastic. His signing — along with Lukas Podolski and Olivier Giroud — represents a change in philosophy for Wenger; a sign that, to some degree, he’s abandoned the build-on-youth policy that’s defined much of his post-Invincibles tenure at Arsenal. I agree with your view of Arsenal as a progressive club and a club whose financially responsible values should be lauded considering the current Abramovich–Petro Billionaire climate. He revolutionized the Premier League when he first arrived, combining diet, modern training methods, and international scouting to great success. But the injection of bottomless oceans of foreign cash into the league has blunted that early edge and created a situation where the truly big clubs can simply use Arsenal — or Everton, for that matter — as de facto scouts.

When is the last time a player came up through the Manchester City youth ranks and made an impact at the top flight? Who cares about developing youth when you can just buy a player that another team has already developed? Henry, Cole, Nasri, Fabregas, Van Persie, and Song are just a few of the bigger names among former Arsenal players — lovingly scouted, blooded, and developed by Wenger — who have hoisted silverware for other teams. I used to comfort myself by saying, “Well, Wenger has never sold a player before their prime.” But that’s not necessarily true anymore. The players continue to sign somewhere else, and Wenger invariably responds by signing some 14-year-old from France whom you’ve never heard of before. So the signings of Cazorla, Podolski, and Giroud — all in or around their primes — would seem to be positive developments, a gesture toward the fans and their silly preference for silverware over third- and fourth-place league finishes.

But while transfer rumors regarding Cazorla would be par for the course for Arsenal, I’d be shocked if he actually left. It usually takes an Arsenal player more than a single season to tire of the mediocrity. More intriguing is what happens with Wenger should the team miss out on the Champions League. He’s got a year left on his contract and the constant questions about transfers, lack of trophies, and money seem to be getting to him. He recently harangued a reporter for The Sun about a story it printed stating Arsenal would offer him a contract extension in the wake of Arsenal’s make-a-speech-with-no-pants level one-nil embarrassment at the hands of the lowly Blackburn Rovers in the FA Cup.

My sense is, if Arsenal finishes top four, that Wenger is bulletproof, at least through the end of his contract, and maybe beyond, if he wants it. But in addition to Everton, Arsenal has soon-to-be champs Manchester United, always dangerous Fulham, and don’t-take-them-lightly FA Cup finalists Wigan among its five remaining fixtures. If Arsenal collapses down the stretch and misses out on that Champions League cash, should it start softly next season — as it has the past two seasons — it truly will be Wenger Out.

Koremenos: I knew going into this e-mail back-and-forth that the stakes were pretty high for this match, but after debating this with you, I must say I didn’t realize they were this high. The fate of two managers, as Moyes isn’t exactly a lock to return either, one (maybe two) star player and my sanity essentially could be sealed by one result. If your Gunners pull this off, it would have them in good position for the eventual collapse by a Chelsea side that plays approximately 400 matches in the next three weeks. And if Everton wins, well, start sounding the alarm bells in north London.