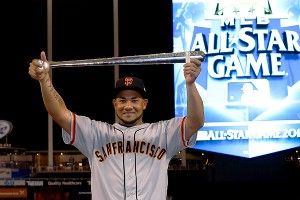 It was an 8-0 blowout that was decided by the fourth. Both sides breezed through 1-2-3 inning after 1-2-3 inning thereafter — great if you’re a student of pitching, not so much if you’re looking for fireworks. And the game ended with a retired manager making sure he could lull fans to sleep one more time before hanging ’em up. But we still counted 13 lucky, awesome, winsome, and gruesome random moments from the 83rd MLB All-Star Game:

The country singer’s rendition of the national anthem took so long, it ripped a hole in the space-time continuum. As a reminder, the only person who’s allowed to stretch out the anthem is Marvin Gaye. Although there’s also something to be said for doing it like this.

Tim McCarver was so flummoxed by Rodney’s extreme hat-brim tilt that he wondered if hitters might think Rodney’s whole face, as well as his hat, were sizing up the on-deck circle. All things considered, 29-year-old career minor leaguer Bryan LaHair was a more unlikely All-Star than the Rays closer. But as SB Nation’s Jeff Sullivan wrote:

Prior to this season, Fernando Rodney was your least-favorite pitcher in your favorite team’s bullpen. He didn’t make enough of the pitches he threw, and he always seemed to teeter on the edge of disaster, if he didn’t actually fall down. Now, Rodney is your favorite pitcher in your favorite team’s bullpen. He doesn’t get hit. He doesn’t put people on. He makes people miss, he ends games, and he shoots an invisible arrow at the sky while the first baseman asks him where the arrow’s going.

Before the game, AL manager Ron Washington announced that Rodney would be the team’s ninth-inning man, ostensibly anointing him as the best closer in the league. Washington’s own closer, Joe Nathan, might actually be a bit better this year, but you can’t quibble too much with Rodney’s near eight-to-one strikeout-to-walk ratio and his nearly unhittable fastball-changeup combination. Rodney did indeed come in to pitch the ninth, retiring Andrew McCutchen, Jay Bruce, and LaHair 1-2-3 … with the AL trailing 8-0. Rodney shot his imaginary arrow in the air anyway. The brim messes with your mind, man.

Fox must have shown Trout’s preposterous catch of that would-be J.J. Hardy home run about 174 times, and that was before the game even started. They did it again in a promo leading into the fifth inning. Still, it’s tough to complain when you know you’re watching the odds-on favorite for Catch of the Year in July. And then Trout becomes the third-youngest player ever to get a hit in an All-Star Game, the second-youngest ever to steal a base (he stole two), and somehow, the first player to swipe a bag off R.A. Dickey all year.

He stepped into the batter’s box in the fifth. Worked a walk off Jered Weaver. Hustled to second on a fly ball to left that would have left most other base runners standing at first.

And that’s when the wheels came flying off. When Weaver fielded David Wright’s grounder back up the middle, Harper was a dead duck, having strayed too far off second on contact. That was nothing compared to the goat horns he’d wear in the bottom of the inning. Mike Napoli lofted a pop fly to left, normally an easy play for your average Little Leaguer, let alone The Next One. Unfortunately Harper lost the ball in the lights, leading to a symphony of That’s Clown Fielding, Bro snark. Given how far this meme has spread, it’s probably time for a new one.

Verlander gave up five runs on four hits and two walks in the first inning, more or less knocking his teammates out of the game before they could even get up to bat. Only three pitchers in All-Star Game history had ever allowed five runs or more in one game: Roger Clemens, Tom Glavine, and Jim Palmer. Verlander’s struggles were a shame, given how he started his outing: a two-strike breaking pitch to Carlos Gonzalez that was so nasty, it’ll haunt CarGo’s dreams forever.

Chest-high Chris Sale fastball, high 90s, on the hands … and McCutchen ropes it to left for a stinging single. Hey, Andrew, how does it feel to be a ludicrously talented, leading MVP candidate for the first-place Pittsburgh Pirates? Sorry, didn’t catch that. Ah, OK — pretty happy, then?

When you’re up 8-0 and you’ve got a bunch of relief pitchers champing at the bit to get in the game, it makes sense to use as many of them as possible. Still, it’s pretty perfect that Tony La Russa’s last act as a major league manager was to use three pitchers in the ninth inning of an 8-0 game … and to send out Terry Collins and Ron Roenicke to make the last two changes, because apparently causing terminal boredom is an honor that should be shared with friends.

You won’t get me to pass judgment on any fan base. If Royals fans want to boo Robinson Cano, that’s their prerogative. If Yankees fans want to revel in Butler’s ninth-inning strikeout, mazel tov. Stock up on Wayne Krenchicki voodoo dolls. Whatever. But potentially changing the rules of the Home Run Derby so that the host team is always represented? That’s some thin-skinned, reactionary bullshit. This has been MLB’s M.O. for a while. All-Star Game ends in a tie? Change the rules so that a game that features players playing out of position, extending a hand to the opposing team to receive a high-five after a home run (naturally, Robinson Cano left Melky Cabrera hanging … BOOOOOOO!!!), tweeting during the game, and being led by a retired manager and a retired pitching coach somehow decides home-field advantage in the World Series. Anything that portends even the slightest whiff of embarrassment for the Lords of the Realm seems to elicit a gigantic, counterproductive overreaction. Except for the one flaw about which MLB should feel most embarrassed, of course.

In the end, the decision to start Matt Cain over R.A. Dickey was about as newsworthy as a bunch of people razzing a player for leaving their hometown boy off a Home Run Derby roster. Dickey was having a better season than Cain by just about any metric you can imagine, be it wins, win-loss record, or ERA, or more advanced stats such as FIP and WAR. Also, don’t bother with the Dickey-as-flash-in-the-pan argument, either. Cain’s ERA since the start of the 2010 season: 2.93. Dickey’s: 2.92. But Cain is a phenomenal pitcher in his own right, a playoff hero during the Giants’ amazing run to a World Series title in 2010, and a perfect-game hurler who dazzled a bar full of baseball nerds one fateful Wednesday night.

There’s a good chance La Russa chose Cain over Dickey for the same reason the Home Run Derby rules might get changed: to avoid embarrassment, for himself, and for starting catcher Buster Posey. But that decision did give us one of the biggest treats of the night: Chooch Ruiz’s catcher’s mitt, which was literally the size of his entire torso. Ruiz could become a trendsetter here, given the potential that such giant equipment offers. We could see behemoths like Adam Dunn bring back the tree-trunk-size bats of Babe Ruth’s day. Pitchers could start throwing basketballs instead of baseballs, giving Jonathan Sanchez a solid 10 percent chance to make any portion of the ball actually cross the plate. Just thinking about this new trend is getting Garth Snow excited.

Item: Joe Buck and Tim McCarver mentioned some variation of Cabrera “dedicating himself to the game” at least three times during the telecast in reference to the Giants outfielder’s huge breakout season.

Translation: Melky was chubby. Now he’s in shape, and killing it.

Item: Matt Kemp, miked: “I’m telling you, everything he hits right now is a hit.”

Goes two-for-three with a first-pitch single in the first and a two-run bomb in the fourth. Cabrera (.353/.391/.519) was traded this offseason for the aforementioned Jonathan Sanchez, who’s walking nearly 7½ batters per nine innings, owns a 6.75 ERA, and just might be the worst pitcher in the big leagues right now. As Grantland’s resident Royals sympathizer Rany Jazayerli tweeted: “Melky Cabrera winning the All-Star Game MVP at Kauffman Stadium is the new reigning champion for The Most Royals Moment Ever.”

It started with a pre-game speech that quoted the great Lou Brown. It continued with a warm ovation during pregame intros. Then, in the sixth inning, the opening strains of “Crazy Train” wafted down from Kauffman Stadium’s speakers as Chipper made his way to the plate. On the first pitch he saw from Chris Sale, Chipper squibbed a 72-hopper to the right side. You could actually hear him say, “Gah!” after he made contact, knowing his final All-Star Game appearance would end with a weak groundout. But something funny happened on the way to a sure out: Ian Kinsler never made the play. Watch this and tell me Kinsler doesn’t make that play with relative ease during a non-exhibition game, when it’s not against a future Hall of Famer vying for one last little thrill. Kinsler inexplicably broke to his right at first on contact, then somehow couldn’t catch up to the ball, despite being widely regarded as one of the best defensive second basemen in the game.

Whatever the case, Chipper was laughing at his good fortune by the time he got to first. He’d become the third-oldest player ever to record a hit in an All-Star Game. Who knows how the Braves will fare the rest of the year, or if Chipper’s knees will allow him to stay upright for three more months. But if these are the enduring images we take with us of one of the best third basemen of all time and one of the most self-aware superstars to ever don a uniform … well, that’d be just fine.