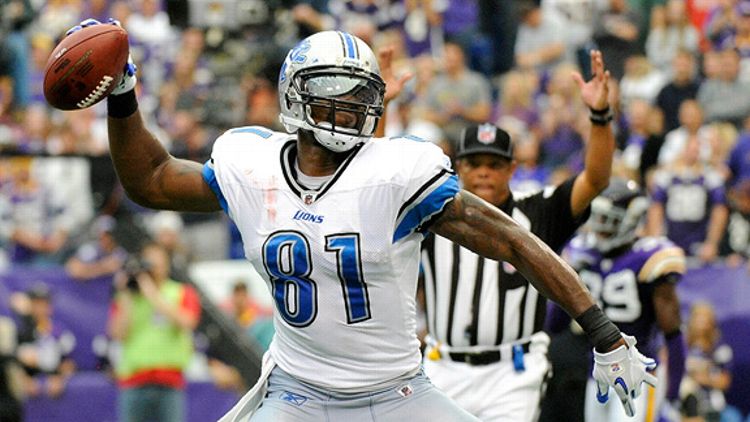 There’s a certain air of anonymity to most NFL players. Outside of quarterbacks (Ben Roethlisberger’s recklessness, Tom Brady’s cool), these masked men, by choice or by circumstance (they are, after all, masked) don’t exhibit a ton of personality. And fans aren’t all that bothered, right? One could argue, much to Arian Foster’s dismay, that the stat/fantasy value of a player is way more important to fans these days than the person who is putting up the numbers. It’s a faceless league right now. And that’s why Calvin Johnson is the perfect face for it.

Megatron is his nickname, and it’s a tribute to his utterly trill style of play that he can make such a dork-tastic moniker sound cool. Lining up for the Detroit Lions, in their metallic blue and silver, with a visor obscuring his face, Johnson practically transcends anonymity into an almost robotic kind of cool. He is the rise of the machines. He’s not a vessel for your fantasy team — he’s a footballing fantasy.

People are quite obviously taking notice, and not just the guy sitting next to you at The Mean Fiddler who spits out upside-down nachos every time Johnson makes another go-go-Gadget grab.

The Reducer: Week 6, Liverpool Does the Evolution

In an interesting act of reverse bulletin board material, members of the Dallas Cowboys have been showering praise on Megatron this week in the lead-up to their game with Detroit this weekend. Dallas safety Gerald Sensabaugh said, “Calvin is just in his own league with what he does.” Linebacker Bradie James imagined trading places with Lions quarterback Matthew Stafford. “I wish I could play quarterback,” he said. “You throw it up, man, he can go get it. He’s about 11 feet tall.” Cowboys coach Jason Garrett didn’t even beat around the bush, saying, “Calvin Johnson is arguably the best player in the National Football League.” Dallas! Going all-in on the reverse jinx!

This season has been Johnson’s coming-out party, due in no small part to the telepathic relationship he has developed with Stafford. Their electric connection reminds me of Daunte Culpepper and Randy Moss. Last Sunday, it probably reminded a few people in Minnesota, as well.

Just look at this. (I know you’ve looked at it. Look again.)

When asked about it later, Johnson was pretty cool and impersonal about the whole thing. “We know we have the firepower and we showed it.” How very … robotic. Makes you wonder, who was that masked man? I actually don’t care all that much. I just want to watch him play.

Sweet, Home: A Chicagoan Stands Up For Walter Payton