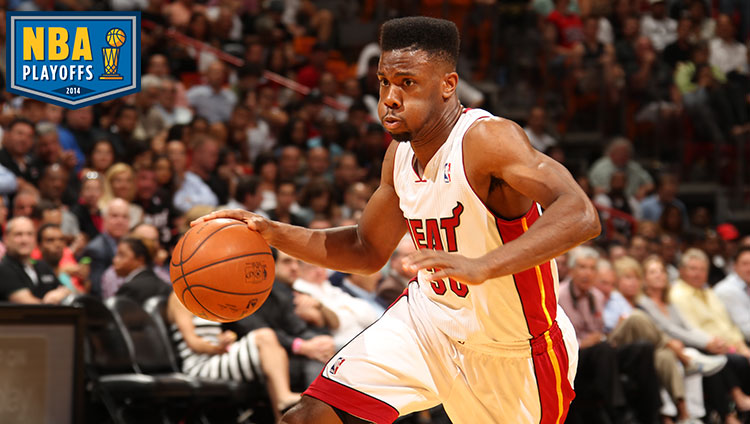 Back on New Year’s Day, I was part of an ESPN roundtable making predictions for 2014. The first question was predictable: “One year from now, LeBron James and the Heat will be … ”

Intact, I answered. Of the thousands of reasons I could’ve cited, I focused on a small moment that happened only two days earlier. In the third quarter of a Heat-Nuggets game played on December 30, Norris Cole took off on a fast break on a tipped outlet pass from Bosh. Cole feinted a Eurostep to get by Ty Lawson, but as he elevated, his drag foot got caught on one of Lawson’s legs, and without anything to brace his fall, Cole landed right on his jaw with 8:46 left in the quarter. You could see his head recoil. He stayed on the ground in clear pain. His teammates rushed over to the other end of the court, forming a circle around him, a pride of lions encircling their wounded cub.

It was the first time he face-planted this season. It wouldn’t be the last. In Game 6 of the Pacers-Heat Eastern Conference finals, Lance Stephenson took a shot at Cole’s face on a drive with 8:47 left in the second quarter that left him with a bloody nose after once again face-planting on his fall. The lead was 13 then. It would balloon to 37 in the third quarter.

Cole has become a rallying point for Miami, an endearing side of the Heat’s familial on-court identity that is usually only seen in the constant berating of Mario Chalmers (which, to be fair, is endearing in its own way). It’s hard to talk about Cole without also talking about Chalmers. They have a big brother–little brother dynamic in that they ostensibly play the same role on the team, albeit in two markedly different fashions.

They’re both the first line of defense at the initial point of attack. Chalmers uses his incredible wingspan (at 6-foot-1, he has the wingspan of an average small forward) to gamble and recover, often going for the home run. Cole, on the other hand, doesn’t have the wingspan to recover from risks, but that’s not how he plays defense. He sticks on his man, and has the quickness, flexion, and endurance to pressure for long stretches. As the older brother acts out and oversteps his bounds, the younger brother steels himself in the shadows. It’s the hubris that makes Chalmers who he is, and it’s the self-discipline that makes Cole the perfect counterpoint. The two are entwined in a balancing act, and it’ll be interesting to see how they do against a recovering Tony Parker and a much-improved Patty Mills.

The Miami Heat will be making their fourth straight Finals appearance. You may have heard about this.

The team, with its current core, has come a long way since 2010, and so have we as observers. In the fledgling stages of this Heat social experiment, it felt like we were watching a summer blockbuster about three generals in space-age war machines trailed by an infantry militia. Sometimes it still does. After four seasons, though, the edges have softened.

They’re no less overbearing when running full throttle, but their consistency has become a comfort food for the fans and detractors alike. We’ve all grown accustomed to seeing their familiar faces on screen. The Heat, in a sense, are a TV family, one that’s already lasted longer than most TV families these days.

But these teams are built to win, not necessarily to last. The rumors and conjecture and blind faith are all out in plain sight, waiting for some kind of disbandment that leaves the Heat in the same state that Cleveland and Toronto were left in after LeBron James and Chris Bosh departed. Teams like this don’t have storybook endings. They either achieve what they set out to do or they don’t, and then lay in waste sooner than anyone would’ve guessed.

The Heat have spent the last four years trying to prove that their blueprint can survive the coming challenges. Chalmers is playing for a new contract, and Cole continues to grind, hoping to get a bigger piece of the pie, to say nothing of the leaguewide LeBron lust. It could all fall apart very soon. But would it shock you if this Heat team were the exception?

Daryl Washington and the Moving Target of 'Team Needs'