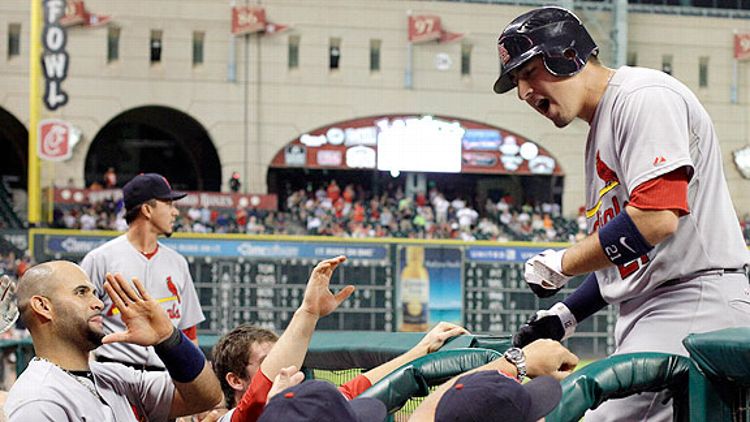 One hundred sixty one games down, nothing decided. That’s where the Red Sox, Rays, Braves, and Cardinals find themselves after an incredible, surreal night of baseball, one that left both wild-card races tied and set up a spectacular finish no one saw coming.

The most famous triple play in baseball history was recorded by Bill Wambsganss of the Cleveland Indians, who turned an ultra-rare unassisted version during Game 5 of the 1920 World Series, with the game already largely in hand. Last night, the Rays turned one at Tropicana Field that might end up making a bigger impact, maybe even the biggest in baseball history.

The Yankees put men on second and third with nobody out in the top of the sixth. Nick Swisher hit a deep drive to center. From second base, Mark Teixeira tagged up, figuring he could advance on a deep flyout. Instead, the ball bounced off the wall, and Teixeira could only make it as far as third on a double. After an intentional walk to Jorge Posada, Rays starter Jeremy Hellickson induced a grounder to third. Evan Longoria, one of the best defenders at any position in the big leagues, gathered in the chopper, tapped third in one motion, fired to Ben Zobrist at second, who then chucked it to Sean Rodriguez. 5-4-3 triple play. Inning over, Yankees up just one.

The entire sequence of events was ugly for the Yankees, from Teixeira’s curiously passive baserunning to Martin blowing up a potentially huge inning. But the biggest embarrassment occurred as Martin neared first base. Rather than run through the bag, which any sane person in the universe will tell you is the fastest way to first, Martin chose a headfirst dive. Russell! Bubalah! We just covered this yesterday! To the lava pit you go.

Few players have cooled off over the course of the season more dramatically than Matt Joyce. In May, Joyce may have been the best player in the league, hitting an unconscious .414/.470/.759 and earning an ESPN The Magazine profile and the title of baseball’s most pleasant surprise. Nagging injuries and predictable regression weighed on the rest of his season, so much so that Joyce earned the nickname MOM on the popular Rays blog DRaysBay … for Month Of May. Still, Joe Maddon kept trotting him out there, batting him cleanup against the Yankees with the season on the line. Joyce delivered in the 7th, launching a go-ahead, three-run homer that was just his second blast in his past 23 games. Heady stuff for a kid from suburban Tampa who spent his teens rooting for the Devil Rays at the Trop.

Joyce’s homer came off Rafael Soriano. You might remember Soriano as the Rays’ nearly unhittable closer last year, the linchpin of a stacked bullpen that ran roughshod through the American League. Soriano and the Rays’ next five top relievers from last year all bolted this offseason, the closer landing in New York via a $35 million contract Brian Cashman didn’t want his team to give out. Soriano has battled injuries and bouts of ineffectiveness for much of the season, culminating in a homer that saved the Rays’ season. Between Soriano serving up Joyce’s homer and the daily tragedy that is Carl Crawford’s 2011 season, one wonders if The Extra 2% involves planting your top players on rival teams and waiting for them to fail.

Last night’s win notwithstanding, the Red Sox have seen every facet of their team wear down and fail in the past four weeks, with the bullpen being the latest culprit. Daniel Bard’s latest September torch job gifted two runs to the bottom of the Orioles order, setting up the tensest 9th inning of Boston’s season. The Sox very nearly blew a four-run lead in the last two frames, only to get bailed out by a terrible Wally Bell strike call on Nick Markakis that dramatically changed the inning, and a gutty performance by Jonathan Papelbon to retire Adam Jones after a marathon at-bat, preserving the game.

With Bard having thrown 25 high-stress pitches and Papelbon 28 more, the Red Sox could have some fatigued relievers on their hands when they play Game 162 tonight. The biggest bullpen concern is Alfredo Aceves, the indispensable long man who’s been fantastic all year. Aceves worked a very efficient 3.2 innings last night. This after coming in down four Monday night and chucking another inning. Terry Francona’s decision to use Aceves Monday now looks especially iffy, as the Sox scramble to find fresh arms for their biggest game of the year. Try telling that to Aceves. Asked if he’d be ready to go for the rubber match of the Baltimore series, he quipped, “If I wake up tomorrow, I’m good.” In a season that’s been fraught with disappointment, swiping Aceves from the Yankees for a few pennies might be Boston’s best move of the year.

After three innings at Minute Maid Park last night, the Cardinals found themselves down 5-0, staring at the possible end to their season. Then they remembered they were playing the Astros. A furious comeback ensued, the Cardinals prevailed 13-6, and now the National League wild-card race is tied, too.

Lance Berkman’s usual exploits aside, the protagonists weren’t who you would expect. Subbing for injured starters Matt Holliday and Rafael Furcal, Allen Craig and Nick Punto went bonkers. The two fill-ins went a combined 6-for-8 with four extra-base hits, scoring four runs and knocking in six.

The ledger included Punto’s first homer of the season. So rare are Punto’s power exploits that the Cardinals dugout did what a team usually does when a rookie goes deep for the first time in his career or a pitcher clears the wall: They gave Punto the silent treatment. Like the Rays, the Cardinals couldn’t have expected to be here a month ago, given how far out of the race they seemed to be. I’d say they’re just having fun out there, but that would bring up painful memories of misplaced Brett Favre worship. So … let’s not do that.

With the AL East title and everything else that could be clinched already clinched, the Yankees have rested several of their best players in the past few days, most notably no. 1 starter CC Sabathia. That’s what you do when you have only one elite starter, and you want to protect him at all costs. The Phillies, on the other hand, have three elite starters, and another damn good one. Resting everybody would be damn hard, even if they wanted to.

That’s been bad news for the Braves, who’ve been shut down two nights in a row by Cliff Lee and Roy Oswalt. Charlie Manuel’s played all his everyday players these past two games, too, making life even harder for the Braves, with the latest damage a 7-1 loss that wiped out the last speck of Atlanta’s wild-card lead. Derek Lowe got torched again (four innings, five runs) and might not be fit to start in the playoffs at this rate — assuming the Braves actually make the playoffs. Several Atlanta hitters remain ice-cold. And the Cardinals get another crack at the lowly Astros tonight. Yikes.

The Braves do get one morsel of good news: They send their ace Tim Hudson to the mound tonight against Joe Blanton, the Philly no. 5 starter who’ll be making just his fifth appearance after missing nearly four months with a shoulder injury. Meanwhile, the Cardinals do face at least one formidable opponent in an Astros uniform — starter Brett Myers, who’s 4-0 with a 1.23 ERA in his past four starts. On paper at least, both NL wild-card contenders seem like favorites to win tonight. Ditto in the AL, where David Price faces a Yankees team that will start a relief pitcher and rest all of its top arms … and the Red Sox send Jon Lester to the bump, on three days rest, against the very mediocre Alfredo Simon.

But we’ve all learned not to assume anything this September. Later tonight, we might see the culmination of two of the biggest collapses in baseball history, or huge sighs of relief from two beleaguered fan bases. Knowing what’s happened so far, we could be in for a couple of Game 163s. Because really, doesn’t all of this have to end that way?