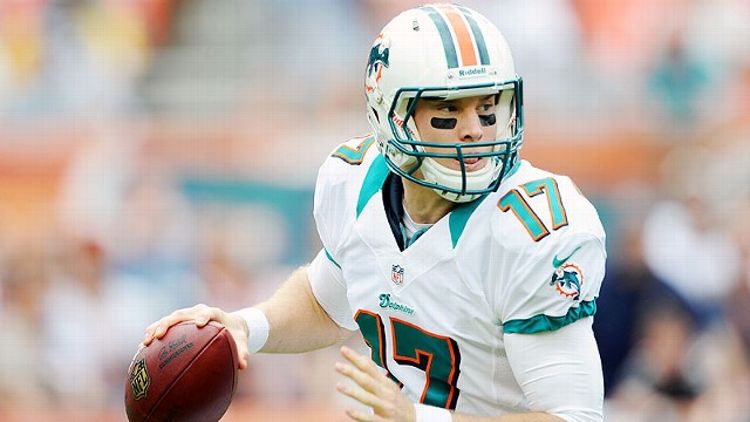 Everyone remembers that feeling on the first day of school. Rolling up in that brand-new collared shirt and the impossibly clean shoes. Not thinking, but knowing that, yeah, this is going to be my year. There was something reassuring about seeing everyone back together again. This isn’t new. I’ve been here before. I’ve got this. In those first couple days, the possibilities seemed endless.

For NFL players, that’s OTAs. After a few months away, everyone’s finally back in the same place, and the prospect of starting anew, well … it tends to get people a little overexcited. This is the time of year reserved for baseless, outrageous predictions by groups of pathologically competitive men drunk on football and hope. With that in mind, we present the 2013 NFL season, based on nothing but those baseless, outrageous predictions.

It’s a clear and crisp 55-degree day in Cleveland, and as the first half comes to a close, the only thing that’s been more perfect than the weather is Ryan Tannehill. The Dolphins quarterback got himself a fresh buzz cut this week, and in those new Fins unis, damn, does he look immaculate. That chin is what comes to mind when you think Franchise Quarterback.

In two quarters, he’s already thrown for 250 yards and three touchdowns (it would’ve been four, but Marcus Thigpen ran the opening kickoff back for a touchdown; in the fourth quarter, he’ll take a punt back, too). Two have been to Mike Wallace, who’s blown past Joe Haden on nearly every play. The other was to Brian Hartline, who’s helped make it clear that he, Wallace, and Brandon Gibson are pretty much Jerry Rice, John Taylor, and another Jerry Rice.

Over in Indy, Andrew Luck has played fine in the first half, but he looks to be little more than the quarterback he was last year. In Washington the following night, Robert Griffin III will struggle against a revamped Eagles secondary. It’s Tannehill who’s made the leap. There’s no denying it. He ends the game with 420 yards and five touchdowns. Miami wins 63-10. Afterward, Mike Sherman, in his half–New England, half–New Orleans accent, notes that he doesn’t want to say “I told ya so.” He does anyway.

Midway through the first quarter inside the Edward Jones Dome, Chris Johnson breaks loose off right tackle and starts his tear down the sideline. The blocking in the Titans’ new run-heavy offense is perfect. All that’s between Johnson and the end zone is an empty stretch of turf; there isn’t a Ram within even 20 yards.

Then, suddenly, Alec Ogletree pops into the frame. Ian Eagle starts to react, but he trips over each word. There is no explaining this. Ogletree slowly gains ground — 20 yards, then 15, then 10. He catches Johnson just inside the five and drags him down inches from the end zone. Stunned, Johnson staggers to his feet, takes off his helmet, and stumbles his way to the bench, where he tells Mike Munchak to stop the game. He has something to say. “It’s with a heavy heart that I announce my retirement from the game of football,” Johnson says over the PA. “There is nothing else for me here.”

Later in the same game, Bernard Pollard, back from suspension, lays out tight end Lance Kendricks over the middle and gets flagged for his third personal foul of the day. It’s his 15th of the year, adding to the single-season record he shattered in less than four weeks. The next day, while speaking to Jim Wyatt of the Tennessean, Titans defensive assistant Gregg Williams will sigh, stare into the distance, and with his voice cracking, wonder what sort of god would create a world with only one Bernard Pollard.

Three quarters are in the books here in Kansas City, and the league’s two best offenses are engaged in an all-time shootout at Arrowhead. Philip Rivers is 21-for-25 for 328 yards and four touchdowns, and his Chargers lead 42-38. The new standard for accuracy, Rivers is now completing 72 percent of his passes on the season. He’s turned in an impressive first campaign under new head coach Mike McCoy, and is so content in this new offense that one teammate even noted that Rivers has been “slightly less of an asshole this year.”

As good as Rivers has been, he isn’t even the best player on the field tonight. That would be Dwayne Bowe, who’s already added another 172 yards and two touchdowns to the MVP-type numbers he’s put up through 10 games. Bowe leads the league in receptions, yards, and touchdowns, and speculation has begun that Matt Cassel might have been the worst quarterback in NFL history. Following Bowe’s 230-yard, three-touchdown performance in the Chiefs’ win over Denver the previous week, Andy Reid claimed that, “If it weren’t for Oklahoma Joe’s, Dwayne Bowe would be the best thing that’s ever happened to me.”

Coming into the week, the Chiefs had the league’s no. 1 offense, thanks largely to Bowe, but also to Jamaal Charles’s career year. Before the game, his edge on Adrian Peterson to be the league’s top rusher was just 12 yards — 1,734 to 1,722. He already has 130 against San Diego, his 11th-straight game over the century mark. For all Chiefs’ firepower, though, this is Rivers’s night. With less than a minute left, he finds Antonio Gates in the corner of the end zone on a ball squeezed into a window between all four Kansas City defensive backs. Gates celebrates the score the same way he has all season — by lifting his jersey to reveal the “73” written in Sharpie on his white undershirt. He’ll take the fine. Some things are more important than money.

Le’Veon Bell has been Pittsburgh’s starting running back from the first week of the season, but he’s steadily gotten better every week. Against the Ravens here on Sunday night, he already has more than 120 yards at the beginning of the fourth quarter. Franco Harris’s name has been evoked six times.

The game is tied in the final minute of regulation, but Baltimore is driving. With 10 seconds left, and at the Pittsburgh 42, most teams would still be out of field goal range. It’s a good thing the Ravens aren’t most teams. Baltimore kicker Justin Tucker is 25-for-25 on the year, including two from 60-plus. As Tucker steps through the kick, John Harbaugh starts his walk to midfield. Not once does he glance toward the uprights.

More than a month has passed since Adrian Peterson reduced Eric Dickerson’s single-season rushing record to ash. Peterson finished the season with 2,872 yards, but still, his disappointment was evident. “It was no biggie,” Peterson said following the Vikings’ Week 17 win. “I was actually hoping for 3,000, but I didn’t want to say anything. Nobody wants to come off like that guy, ya know?” In the divisional round win over Seattle, Peterson tallied another 426 yards on 62 carries. Minnesota has not thrown the ball since Week 9.

Peterson finished only two games with fewer than 100 yards — both against the Detroit Lions, who feature the most dominant defensive tackle duo professional football has ever seen. When asked whether he thought Ndamukong Suh was a dirty player, Peterson replied, “Not at all; there’s only a gap in your understanding. What you’re seeing is just someone who exists on a different physical plane.” On the first play from scrimmage, the collision between Peterson and Suh in the hole leaves a crater five feet deep and 10 feet across. Play is delayed an hour.

The game gradually gets away from Minnesota. Calvin Johnson had another historic season — one in which he broke his own receiving yards record, but still finished second in the league to Dwayne Bowe — and he’s having his way with the Minnesota secondary. The Vikings fall 31-0. They attempt no passes.

Wind and snow swirl inside MetLife Stadium, and against the backdrop of the falling flakes, Ryan Tannehill is a portrait of beauty and grace. Tannehill is the league’s MVP, and although the Dolphins’ run started as a bit of unexpected noise, they’ve become one of history’s undeniably great teams. “I’ve played with some guys who know how to win in the playoffs,” Mike Wallace said at Super Bowl media day, “but none of them can touch Ryan.”

Playing their first season in 21 years without Jason Hanson, the Lions have turned to YouTube sensation Havard Rugland for their kicking duties. Rugland is instructed to kick away from Marcus Thigpen, who broke Devin Hester’s single-season return-touchdown record through just 12 games, but Miami counters by driving a sedan with an open sunroof through the end zone just as Rugland approaches the ball. He cannot help himself. Thigpen receives the kick five yards deep, and in tribute to Hester, takes it back for a touchdown.

The game is evenly matched throughout. The trio of Wallace, Hartline, and Gibson matches Megatron drive for drive, and although either Fairley or Suh get to Tannehill on every dropback, neither can take him to the ground. The score is tied at 21 through two quarters. Tannehill performs his country album at halftime.

Late in the fourth quarter, on a rare handoff, Fairley manages to strip Lamar Miller and take the ball back for a score to put Detroit up 41-38 with just under a minute to go. Tannehill manages to move the ball to the 45, but eventually, the Dolphins are down to their final play. Detroit sits back in its prevent defense, with Calvin Johnson manning the goal line. At the snap of the ball, Wallace somehow manages to get past the secondary. Tannehill lays a perfectly thrown ball into his arms two yards deep into the end zone. Miami wins. Somewhere, Dan Marino sobs quietly in the dark. “I told you we’d get there,” Fairley says. “I didn’t say we’d win.”

We Went There: A Fine Mess at Madison Square Garden