A Good Day at the Office: The USMNT Makes Amends in Kingston 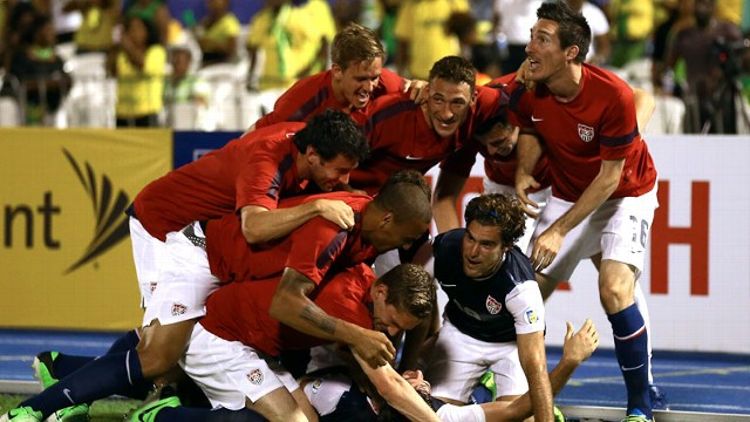 Before Friday night, the United States men’s national team had never won a World Cup qualifier in Kingston, Jamaica, posting an 0-1-4 record that included a painful, troubling loss last September. Nor had Jurgen Klinsmann, the squad’s head coach, used the same starting lineup more than once in his first 27 games.

Both of those surprising streaks ended when Brad Evans, the most unlikely repeat starter from the previous weekend’s 4-3 win against Germany, scored a dramatic game-winning goal in the 92nd minute. Three minutes earlier, the Americans had conceded a potentially crushing equalizer to the Reggae Boyz’s Jermaine Beckford, but Michael Bradley found the 28-year-old Evans, who turned and found the back of the net for his first national team tally.

With the 2-1 win, the Stars and Stripes move into a first-place tie with Mexico and Costa Rica in the Hexagonal and sit in increasingly solid position to be one of CONCACAF’s three automatic qualifiers to the 2014 World Cup in Brazil.

Right. So … Brad who? If, six months ago, you had the man who primarily plays midfield for the Seattle Sounders tapped to start at right back in an important qualifier, you are a liar and a visionary, and you should give Frank Abagnale a call. Klinsmann picked Evans over Geoff Cameron, an equally versatile player who starts at right back for the English Premier League’s Stoke City and started for the U.S. in two March qualifiers — a win against Costa Rica and a tie with Mexico. But Cameron struggled in a friendly against Belgium, and Evans responded well when given a chance against Germany, so there he was, on the field at the opening whistle in the Office, Jamaica’s raucous national stadium.

The decision says as much about the skill and flexibility of the Sounders talent as it does about the maturation of Klinsmann as U.S. national team coach. The sporadic, inconsistent nature of international soccer is such that a manager must find pieces to fit the puzzle rather than jam his best individual players into spots and hope they fit. Bob Bradley learned this lesson — starting Jonathan Bornstein for two games at the 2010 World Cup is just one example — and Klinsmann is coming to understand as well. Evans rewarded the puzzle master for his choice.

The pieces, however, are far from set. The center back pairing of Matt Besler and Omar Gonzalez — starting just their third match together — looked shaky, and left back DaMarcus Beasley was too slow and slight to handle the speed and athleticism of Jamaica’s wingers. Evans, for all his late-match goal-scoring heroics, provided moments of trepidation when defending. The communication between Tim Howard and the back line needs to be better, best evidenced on Beckford’s goal. The Jamaican player was offside, but that’s no excuse for the Americans to be caught flat-footed.

But a nervy win counts the same as any other. The best sign for the U.S. is that it came in a match when two normal keys to victory didn’t occur. Clint Dempsey failed to score, and the midfielder duo of Michael Bradley — who missed last year’s loss in Kingston with an injury — and Jermaine Jones did not dominate the center of the field. Expecting Dempsey, he of 12 goals in his previous 14 matches, to continue his hot streak isn’t fair or realistic, but the men in the middle should do better. The pairing, in its 20th match together, failed to repeat the efficient, effective performance they had against Germany. On a few occasions, Sheffield Wednesday’s Jermaine Johnson bossed Bradley with his power, which was surprising to see. And Jones played too many long balls, unnecessarily pushing the pace when the Americans needed to calmly work the ball around and slowly establish their superior skill.

That skill showed on the first goal in the 30th minute. Sporting Kansas City’s Graham Zusi, one of five players from Major League Soccer in the starting XI, made a quick move on the wing and crossed the ball into the box. Jozy Altidore, whose first tally for the U.S. since November 15, 2011, came against Germany on an assist from Zusi, made it two in two games. The Americans need that ability to create offense out of thin air. Call it “Goals in the Run of Play, the Non–Clint Dempsey Edition.”

An hour later, after one crazy four-minute sequence, the U.S. had its victory. But it came with setbacks, including a yellow card to Zusi that means he’ll miss Tuesday’s qualifier against Panama in Seattle and a concussion that will almost certainly keep Jones out as well. Once again, Klinsmann will have to adjust, likely with Joe Corona or Brad Davis for the SKC winger and Cameron or Sacha Kljestan for the powerful German American central midfielder. Those changes won’t alter the American dynamic much, however, and Panama is missing its best player in Blas Perez. A win at CenturyLink Field on a “ridiculously terrible” temporary grass field and a revenge victory versus a reeling Honduras in Salt Lake City next week would, at worst, leave the U.S. tied for first. Even a win and a tie would see the squad clear of the dreaded fourth-place spot.

We are almost halfway through the final round of qualification, and Klinsmann continues to guide the whole endeavor, his decisions looking better with each win as the panic from the masses subsides. (Everything Is Reactionary would be a good title for a novel about the American supporter base. A less charitable choice: Nothing Is Illuminated.) While every detail of a World Cup cycle is impossible to plan, his general philosophy seems to be coming together, and just in time, too. The choice to dramatically widen the player pool and give some surprising players a chance is paying dividends.

Evans served as Exhibit A against Jamaica. After his goal, the U.S. players on the field and on the bench raced to the sideline and hurled themselves into a massive dog pile. We’ve seen that reaction before, three summers ago when Landon Donovan scored in the dying stages against Algeria to send the Americans to the second round of the World Cup. On Friday night, the U.S. moved much closer to having an opportunity to repeat the behavior in Brazil. The pieces, finally, are falling into place.

How Disappointing Was Your Team's NHL Playoff Run This Year?