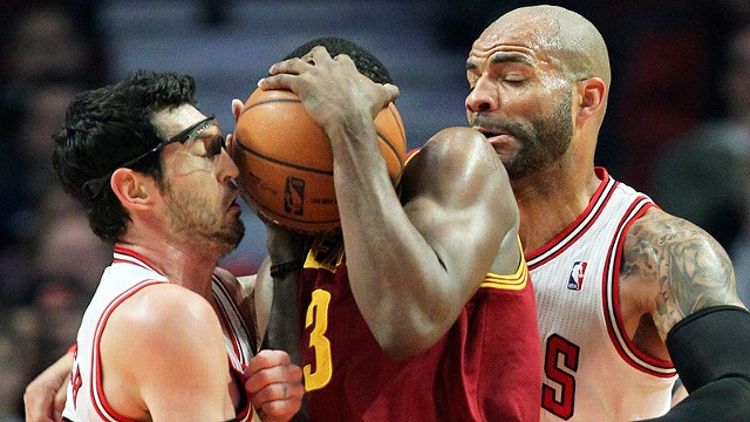 There was a time, about a month ago, when the February 26 game at the United Center would have been appointment viewing. The Bulls were 24-16 and, somehow, without Derrick Rose, just a game and a half back of the second seed in the East. Rose’s return seemed imminent, and in a season where no clear challenger for Miami’s conference throne had emerged, Bulls fans held out hope that a retooling process that was supposed to take two years wouldn’t exist at all.

Along that road would be last night’s tilt against the Cavaliers, what would be the first clash of Rose and Kyrie Irving since the latter’s ascension to the fraternity of the league’s elite. That Rose didn’t end up playing comes as no surprise, given news of late. The Bulls have elected to bring him along slowly, and given what’s happened in the past few weeks, it’s hard to blame them. Chicago was 4-7 in February as of yesterday afternoon, with the average loss coming by almost 16 points.

Irving’s absence, on the other hand, wasn’t expected. He’d tweaked his right knee in practice last week but had managed to play in two games since. When the team announced yesterday morning that its star guard would be taking the night off, the month-long road from anticipated to unwatchable was complete. With the blessing of A Fate Worse Than Death architect Rafe Bartholomew, it was decided that there was no better time to resurrect Grantland’s dedication to the NBA hate-watch.

In Rose’s absence, the Bulls had managed to keep their heads above water a few different ways. The first, which was exposed this past month, was unsustainable success on the road. At the end of January, Chicago was 28-17 but 13-6 away from home. As its toughest road stretch of the season began, so did the Bulls’ tumble.

Another way the Bulls were staying afloat was playing Luol Deng and Joakim Noah a lot. Both had ranked near or at the top of the NBA in minutes all season, and with each playing at an All-Star level (and playing in the All-Star Game), fatigue became inevitable.

Without Rose, the Bulls’ offensive issues with Rose become even more apparent. Since Tom Thibodeau’s arrival in Chicago, the team’s main shortcoming has been its lack of a secondary scorer next to Rose. When Rose is absent, that missing secondary scorer becomes a missing primary one. On the first possession last night, the shot clock managed to tick all the way down to two seconds before Rip Hamilton double-pumped in the middle of the lane and barely grazed the front of the rim. There are few more fitting ways to begin a Bulls game in 2013.

Fortunately for the Bulls, and not so fortunately for me, Cleveland was bent on matching the ugliness in the first quarter. On the Cavs’ first two possessions, it quickly became clear that Tyler Zeller really wanted to shoot the ball from a couple feet inside the 3-point line. He overcame the urge the first time down the floor, but on the second, the ball flew immediately after he caught it. In taking this shot — and the few other deep 2s he attempted in the first half — Zeller appeared aware that his man, Joakim Noah, had two feet firmly in the lane but less aware of why that was.

With his own superstar point guard out, it seemed as though Tristan Thompson had taken it upon himself to pick up the scoring burden for the Cavs. At one point in the first quarter, Thompson started a drive past Carlos Boozer from the top of the key. Halfway to the rim, Thompson spun to his left, directly into Kirk Hinrich. Without Hinrich’s body to prop him up, Thompson likely would’ve fallen on his way to the basket. With it, he managed to take the contact, stay upright, flip the ball toward the rim, and get the hoop plus a foul. After all three points, the score was Bulls 11, Tristan Thompson 7. I paused my DVR, sighed, and reconsidered this whole thing.

To understand the Bulls at this point in the season is to understand Luke Walton’s impact on what happened last night. Early in the second quarter, after a quick Bulls miss, Walton managed to streak down the floor and haul in a baseball pass that led to a layup, a Tom Thibodeau timeout, and Bulls color man Stacey King letting the audience know that he wasn’t aware Luke Walton was still in the league. 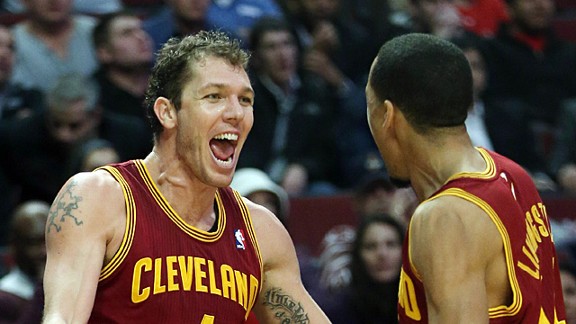 The Bulls have managed the best record in the Eastern Conference each of the past two seasons not based on a glut of talent as much as a glut of effort. Thibodeau’s teams play a certain way, all the time. Last season, with a consistent rotation of 10 players, sustaining that type of energy — especially on defense — was reasonable. This season, that rotation has dwindled to eight — with Taj Gibson out of the lineup last night, it went to seven.

Throughout the second half, the toll this season has taken on that short bench was evident. The Cavs were quicker to loose balls and open on back cuts all too often. For a player like Walton, this is his only time to feast. Always a good passer, Walton became Cleveland’s offensive facilitator in the second half in a way that wouldn’t be possible against the October version of this Bulls team. Everyone in red was a step slow to everything.

If a game existed that I’d show people to illustrate life with Carlos Boozer, it would be last night’s. Boozer finished with 27 points, and as the Bulls gave up basket after basket in the second half, it was the Booz who seemingly kept them in it. The problem is that those Cavs baskets (after baskets) were largely his fault.

In the second half, Cavs coach Byron Scott discovered that a surefire way to score was by putting Boozer in pick-and-rolls near the top of the key. With Kirk Hinrich guarding Dion Waiters, the rookie guard slowly began feasting on the Bulls’ defense.

When Noah picked up a cheap foul and made his way to the bench, I again paused the DVR and surveyed the lineup currently on the floor: Hinrich, Marco Belinelli, Jimmy Butler, Deng, and Boozer. Carlos Boozer was playing center. Within five seconds of Noah leaving the floor, Zeller set a screen on Hinrich, and Waiters drove, unimpeded, to the rim for two. It was right about then that I pressed play on the sepia-tinted, Sarah McLachlan–sountracked montage of Omer Asik I have on my desktop.

For all of Boozer’s defensive shortcomings, last night was a great advertisement for his abilities as a big man in a pick-and-roll set. There’s nothing exciting (no, really, nothing at all) about a two-man game with Kirk Hinrich and Boozer, but in last night’s second half, it was the Bulls’ only offense. Noah has been excellent as a facilitator for the Bulls all year in a way that maybe only Marc Gasol and a couple others can be as a big man, but last night, Boozer was the Bulls’ star on that end of the floor. He hit whatever short jumpers he could get off and got to the rim whenever he could.

Late in the game, the Cavs were sticking with what worked, and the Bulls went away from it. It took about seven trips down the floor, but Boozer finally realized that it was probably best to help out on Waiters (who finished with 25 on 10-for-16 shooting) rather than guard Tyler Zeller 20 feet from the rim. The problem is that he realized it at the wrong time. With a three-point lead, and just 1:32 left, Walton set a screen for Waiters near the elbow. As Boozer jumped out to cut off the path to the rim, Waiters turned back and hit Walton just inside the 3-point line. Fitting considering Walton’s impact on the rest of the game, the shot went down, and the lead was five.

The Bulls managed to cut it back down to two with 15 seconds remaining, but rather than look to Boozer one more time, Deng got the call for the last shot. Coming off a screen, Deng took the pass moving right near the top of the key and forced a tough 20-footer that fell right into the arms of Walton. Right now, I can’t say there’s a more fitting way for a Bulls game to end.