A Case for Not Realigning NBA Conferences Just Yet 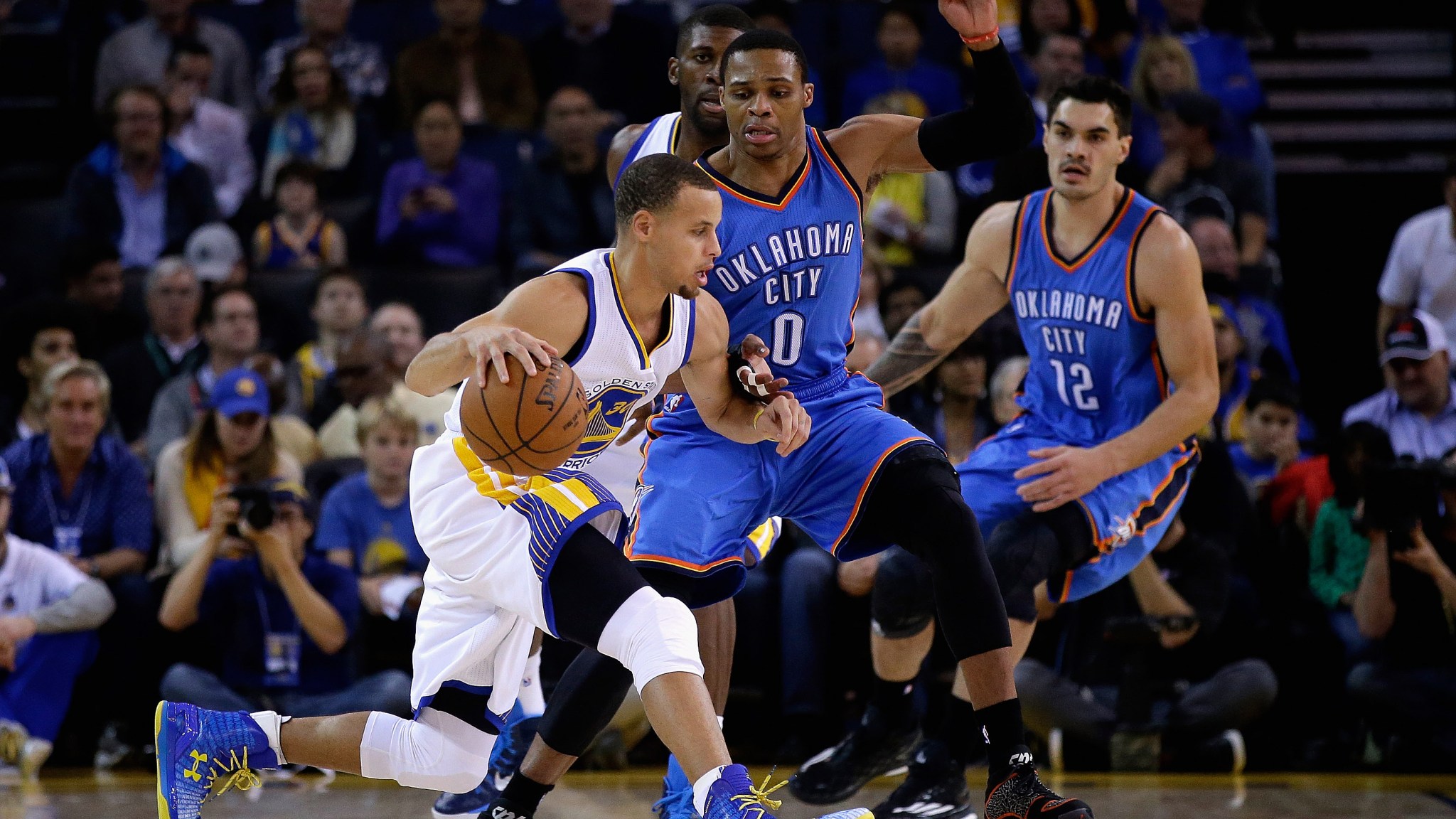 An overview of three consecutive days in December in the Western Conference:

1. On the evening of December 17, the Spurs, whose continual presence among the NBA elite is in no small part due to the team’s conservative distribution of playing time among its core players, were taken, by the Memphis Grizzlies, out into the deep waters of triple overtime and there drowned, by a single point, 117-116, in front of their home crowd.

A newly assertive Marc Gasol (a career-high 26.3 percent usage rate this season, up from 21.7 last campaign) sent the game into the first overtime, when his 30-foot Swan Lake–crossed-with-the-zombie-dance-from-“Thriller” jumper banked off glass and through. It might be fair to call Gasol’s shot a prayer, but MVP candidates are MVP candidates because their prayers actually get answered.

The Grizzlies were in need of Spanish intervention was because of a bit of typically Spursian Swiss-clockwork ball/player movement, involving Danny Green, guarded by Mike Conley, inbounding to Boris Diaw, who hit Manu Ginobili as he was feinting into the paint, which sucked Conley away from Green juuuust enough for Green to have a clean look at a 3, which he of course then drilled because Spurs be Spurs.

With the curtain falling on double OT, Vince Carter got the ball on the wing just outside the arc. Green — probably thinking, like, Oh, shit, that guy I’ve been watching on TV since I was 12 years old is about to launch a 3 — ran at Carter, who zipped the ball to Courtney Lee, who has been so important to the Griz’s increasingly dangerous offense and was so, so wide open in the corner. Lee bottomed it.

Then the Spurs did what they’ve been doing seemingly since they emerged from the primordial ooze: threw the rock to Tim Duncan, who rose up as if shambling out of YouTube folk memory to loft a shot, as he faded left. It arced up over Gasol, hit back iron, bounced, considered its options, and then decided on triple overtime. Where, as previously mentioned, the Spurs eventually drowned.

Two teams firing every available bullet, then resorting to throwing rocks. Plot twists, improbable reversals, heroic deeds hefted as casually as lunch pails. It was unquestionably the game of the season. In mid-December.

2. One night later, the Warriors edged the Thunder, 114-109, in a game that saw Kevin Durant go for 30 points on 10-of-13 shooting. In 19 minutes. He handled rattlesnakes, spoke in tongues, and performed an autopsy on a confused, still-living Harrison Barnes. Durant wasn’t merely flirting with a 60-plus-point game, he was shopping for its engagement ring. Then, cruelly, right before halftime, he turned his ankle. This probably had something to do with how ever since Prometheus, the gods have looked ill upon humans stealing fire.

Steph Curry scored 34 points, grabbed seven rebounds, and handed out nine assists. He also sold some “The City” T-shirts at the arena store and gassed up the team jet. Russell Westbrook, who was rehabbing his broken hand by dunking like he was mad at the hand for breaking, scored 33. On 30 shots, but still: Westbrook FGAs sell by the kilo, because the high is so damn pure. Serge Ibaka went 2-for-2 from 3, a pair of confidently taken bombs that surely sent a mortal shiver down the spine of every team in the conference. All of that happened in one game.

3. On the 19th, the Spurs became the third team in more than 60 years to play two triple-overtime games in a row (the Baltimore Bullets and the Minneapolis Lakers did it within weeks of each other back in 1951), and the only team to lose both. Portland’s Damian Lillard scored a career-high 43 points, along with six assists, forcing the first two overtimes with an array of jumpers, a blocked shot, and a two-handed dunk in traffic.

Lillard murdered the Spurs with a calmness that reminded me of that scene in The Silence of the Lambs in which Dr. Chilton is telling Clarice Starling how Hannibal Lecter’s pulse “never got above 85” that one time he ate someone’s face. Lillard’s lip-curl snarl is worth about 1,000 chest pounds at the current exchange rate. In two games, Duncan and Ginobili — whose regular-season minutes Pop guards as Smaug guards treasure — were forced, in the absence of Kawhi Leonard and Tony Parker, to play some 160 minutes and change. 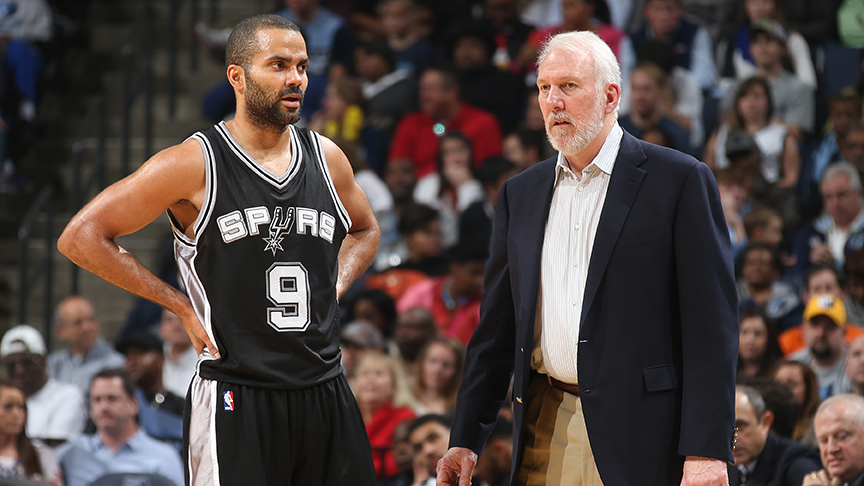 Pop has no other choice but to run his warhorses hard; the Western playoffs are an eight-person lifeboat for a conference populated by five Super Saiyans, a wounded giant, and two ninja assassins. The Spurs are sitting at seventh, a game above the Suns, with Oklahoma City coming up in everybody’s rearview like a vision of revenge. Last season, Phoenix won 48 games and missed the playoffs, while in the East, Toronto was the 3-seed with the same win total. The Suns, a surprise story of desert rejuvenation, got screwed good and hard. Some 47-to-49 win team, maybe even a 50-win team, is getting screwed later this spring.

Searching for Balance: The NBA’s Lopsided Conference Problem
And apparently, this situation of too many elite teams fighting for too few playoff spaces is a problem.

League minds are hard at work at a solution to the problem of conference imbalance. Four good teams stew in the diluted garbage juice of the East, pulling four other rusted wrecks in their wakes, into the playoffs. Meanwhile, out west, titans slug it out night after night, eventually leaving some deserving team or two out in the cold, cursing geography, tradition, and the comfortable limits of long-distance travel. It’s flat unfair.

It’s also everything the NBA and its fans have ever wanted.

In the last 20 seasons, the lowest NetRtg1 of the eventual NBA champion was the plus-2.3 held by the 1994-95 Rockets.2 The next lowest was the plus-3.9 belonging to the 2000-01 Lakers, an elite offensive team that scuffled a bit on defense during the regular season before going up to another gear in the playoffs (postseason NetRtg: plus-13.5), where it lost only one game on the way to the title. Tyronn Lue, meanwhile, lost a part of his eternal soul.

This is crude math, admittedly, but using the 2000-01 Lakers as a baseline, there are currently 11 teams, per NBA.com, with NetRtgs at or above plus-4.0. Seven of those are in the West — the Warriors, Mavericks, Blazers, Clippers, Spurs, Rockets, and Grizzlies. (The Thunder, of course, are just now starting to get healthy, and posted a NetRtg of plus-7.1 last year.)

It’s not too hard to imagine scenarios in which any of the top eight Western Conference teams win the title. Each team, no matter how strong, has a question mark that can’t just be dismissed. Andrew Bogut’s health, as ever, is an open question. Can the Grizz really score when it counts? Does Rajon Rondo bolster Dallas’s suspect defense enough to make up for his lack of shooting and taking the ball out of Monta Ellis’s have-it-all hands? Are the Spurs finally too fucking old, and is Kawhi Leonard’s hand going to be usable, or what? The Clippers are secretly unathletic at every position except the two at which they have otherworldly athleticism. The Blazers miss Robin Lopez. Kevin Durant has played only nine games.

Stats people will almost universally tell you that the NBA is the most historically predictable of the four major sports. It certainly feels that way. Fans, meanwhile, have long complained that the interminable 82-game regular season can bog down into a boring and near-meaningless slog through North America in winter. Nothing much short of catastrophic injury really ever matters in November and December. Various ideas to give regular-season games more weight, make postseason allotments more fair, and squash the scourge of tanking have included: shortening the season, shortening the games, creating some kind of undefined FA Cup–style midseason tournament, world-soccer-style relegation, and easiest of all, though not really that easy, conference realignment.

Then there’s the old Stern & Friends buzz phrase, first deployed, as best as I can recall, around the last lockout, and since taken up by Adam Silver, of “competitive balance,” by which the owners mean a utopian NBA in which every, or close to every, well-run team has a chance to win a title by, not incidentally, lowering and shortening players’ wages.

But the solution to all of those problems — forgettable regular-season games, predictable title winners, teams not playing hard — is simple and already in existence: conference imbalance. It just requires you to do one simple thing: Ignore the East.

Look, we’re never getting relegation; no owner of an NBA team would countenance his billion-dollar property losing some large portion of its value overnight because it came in last in the Atlantic. The owners will never agree to shortening the season without getting money back from the players, and the players are understandably over giving back money when teams are selling for $2 billion. Playoff seeding realignment is logical and fair, and talks are apparently already taking place. But would you rather see Phoenix and New Orleans make the playoffs this spring, or would you rather see Golden State, the Grizz, the Suns, Dallas, New Orleans, the Spurs, the Rockets, and the Thunder fight with broken pool cues in a tiny room over half-game leads for the next four months?

The western half the NBA is the ideal league we have always wanted. To paraphrase St. Augustine: “Lord, make the NBA more fair. But not yet.”