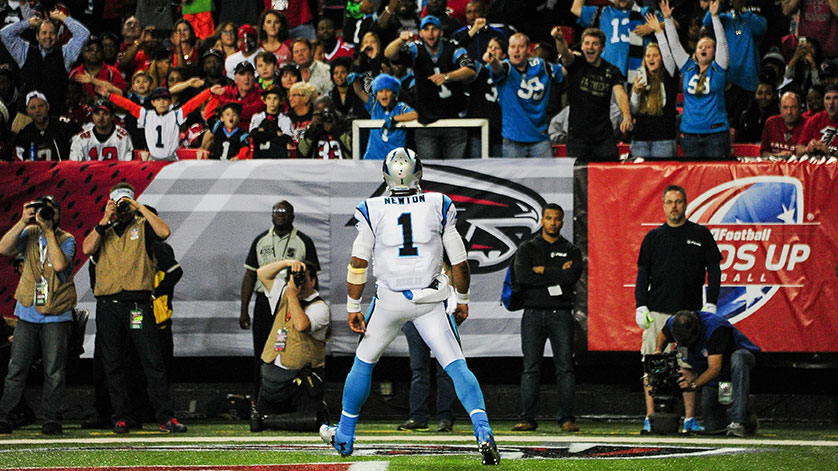 For most of the season, Carolina didn’t look anything like the dominant defense-and-running combination that won 12 games a year ago, but down the stretch the team has resembled at least a knockoff version — and both NFC South titles count just the same. The Panthers’ front seven took no pity on Matt Ryan yesterday, as most of Carolina’s looks on defense were designed to dare the Falcons to run. And when Atlanta tried to move the ball on the ground, it couldn’t. Carolina bet on its six or seven in the box outplaying whichever Falcons were tasked to block them, and it bet right.

Yesterday’s game in Atlanta was about more than a division title or a trip to the playoffs. Despite the loss to San Francisco, the Cardinals’ win against Detroit earlier in the year guaranteed Arizona the fifth seed. The Panthers get to play extra football at home, and they get to do it against Ryan Lindley. Arizona’s defense is good enough to keep it around in most games — but Lindley, on the road, with an offensive line not much better than the Falcons group just decimated by the Panthers? That could end badly.

In the history of poorly timed NFL opinions, my mentioning that Antonio Brown probably shouldn’t be returning punts anymore right before he rips off a crazy 71-yarder for a touchdown ranks near the top. Brown is absolutely terrifying every time he touches the ball, but that’s sort of the point. His value to the Pittsburgh offense is such that any additional risk of losing him doesn’t seem worth it. He showed that again last night, as his seven catches brought his season total to 129 — the second-best mark in league history.

Over 16 games this year, no receiver did more for his offense than Brown, and the number-of-games caveat is necessary only because Odell Beckham Jr. was sent here from the future back in October. Brown has been an ax-kicking, do-literally-everything weapon for Pittsburgh this year, and thanks to the way the schedule unfolded, with the Steelers’ games mattering up until the very end, we were lucky enough to to see him for one more game.

Drew Brees and the Bucs defense both did their damnedest to keep Tampa from getting the no. 1 pick, but in the end, it all worked out for Jason Licht. That is, if “worked out” is a rash of free-agent spending leading to a disappointing season that culminated in the worst record in the league. Either way, Licht won’t have to hope for a certain scenario to fall his way this spring. Tampa Bay will get its pick of whoever’s on the board, and if that happens to be Marcus Mariota, it would make a lot of sense. The Bucs aren’t a quarterback away from contending for a title — 2-14 teams rarely are — but lucking into the chance to take one like Mariota is a start. The bigger concern is over who’s going to be responsible for him if and when he gets to Tampa Bay. Offensive coordinator Jeff Tedford’s health problems led to his release earlier this month, and Lovie Smith doesn’t exactly have the best track record of building an offensive staff that gets the most out of its quarterback. While the Bucs might be happy they landed the top pick, I’m not sure Mariota should be.

Congrats to Father Time, which, in more than 90 NFL seasons, remains undefeated.

The Ravens, I Guess

Baltimore deserves some credit for eventually winning in Cleveland and getting into the playoffs, but it’s hard to be all that excited about John Harbaugh’s team right now. The Browns handed out plenty of bad games to opposing quarterbacks this year, and for most of yesterday’s game, Joe Flacco seemed destined to join them. Through three quarters, Flacco went 14-of-27 for 151 yards before eventually turning it on in the fourth. It wasn’t an overwhelming display of competence, but it was enough to beat Connor Shaw.

The bigger issue for Baltimore isn’t its offense; it’s the defense. Down the stretch, the Ravens managed to avoid teams that could take advantage of their completely depleted secondary. They won’t be so lucky next week, though. Pittsburgh’s win last night means Antonio Brown goes up against corners whose names I’m not sure the Ravens’ coaching staff knows yet. Baltimore’s front seven can keep the team around in almost any game, but from a matchup point of view, the Ravens had to be rooting for Cincinnati last night. 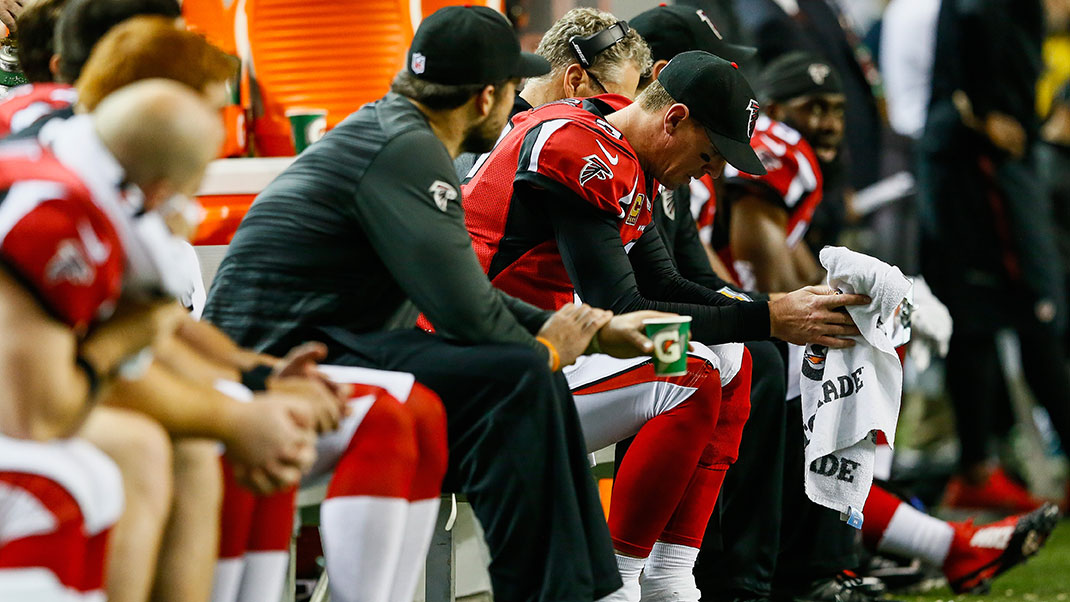 Things really do change fast in the NFL. Two years ago, the Falcons were a play or two away from the Super Bowl. Now, the loss to Carolina means Mike Smith is out of a job and Atlanta is decidedly a team in transition. The Falcons tried using a combination of free-agency dollars and draft picks to bolster their lacking lines on both sides of the ball, but for one reason or another, Atlanta ran into the same problems it did a year ago. Along the offensive line, injuries tore them apart before the season even began. And for most of the year, the deals handed out to Tyson Jackson and Paul Soliai did little to help the Falcons’ run defense and nothing to help their pass rush.

Whoever takes over in Atlanta will inherit a roster that’s little more than a good quarterback, a great receiver, and a couple of defensive pieces. Desmond Trufant is a star, but even he couldn’t drag the Falcons out of the defensive DVOA basement this year. Atlanta’s needs start with pass rushing, but go far beyond that.

It just wouldn’t be the Lions without some late-season craziness that, somehow, defying all reason and logic, could torpedo their season. Despite being playoff-bound no matter what happened yesterday, the Lions might go to Dallas without the best player on the defense that led them there. Ndamukong Suh using Aaron Rodgers to clean the dirt out of his cleats comes on the eve of the Lions’ second playoff trip in 15 years, but it also comes a week after Dominic Raiola was suspended for doing something nearly identical. That’s a distressingly recent precedent if you’re a Lions fan.

Suh probably won’t ever shake the reputation he’s developed, but even with the reservations about some of his dirty play, there’s no denying what he means to the Lions’ defense. He’s their best pass-rusher and their best run defender; that’s a distinction very few players in the league have, and Suh’s the only one who can claim it for the best defense in football.

The only positive for the Chargers is that unlike Atlanta’s, their season-terminating loss won’t end in a coach losing his job. Considering the injury issues, both along the offensive line and in the secondary, San Diego was lucky to even be playing for a trip to the playoffs yesterday. Still, the Chargers went to Kansas City as one of three teams that just had to win to qualify, and they did very little to take advantage of that opportunity.

In a season full of rough outings, Philip Rivers’s offensive line may have saved its worst for last. The Chiefs sacked Rivers seven times and hit him seven more. Rivers didn’t look pressured; he looked like he was under siege. San Diego has needed him to be great all year, and Rivers was far from it yesterday. Chase Daniel and his 5.8 yards per attempt meant more of the same low-octane offense from the Chiefs, but with Rivers turning the ball over three times and De’Anthony Thomas giving Kansas City a huge punt return, it was enough to keep San Diego home next week.

Us, for Not Having J.J. Watt and Justin Houston in the Playoffs

Watching Watt and Houston on adjacent screens, chasing the sack record, was one of the best parts of Week 17. Watt didn’t have much of a chance coming into Sunday, but the two he picked up early on meant he was only three and a half away, with a lot of time remaining. And considering what he’s done all year, I wouldn’t have put it past him. By the fourth quarter, though, Justin Houston was the one with an actual shot. He was a terror again yesterday, and his four sacks meant that by the Chargers’ final drive, he was sitting at 22 on the season, with a real chance to catch Michael Strahan. That made watching him drop back into coverage on the final play of the game all the more disappointing.

Considering what Watt has done this year, it was hard to not root for the Browns yesterday. A Cleveland win would have meant a trip to the playoffs for the Texans, and at least one more stop on Watt’s 2014 tour of destruction. It’s a shame we won’t get another, and the same rings true for Houston. Watt was clearly the best defensive player in the league this year, but Houston was probably second. At 25, he already has 48.5 sacks in just four seasons, including three straight years with double digits. As a pass-rushing “linebacker,” he’ll have a confusing contract fight similar to the one Terrell Suggs faced years ago and the one Jimmy Graham dealt with this offseason, but Kansas City should probably pass on haggling too much. Whatever Justin Houston asks for, he’s worth it.

A Case for Not Realigning NBA Conferences Just Yet