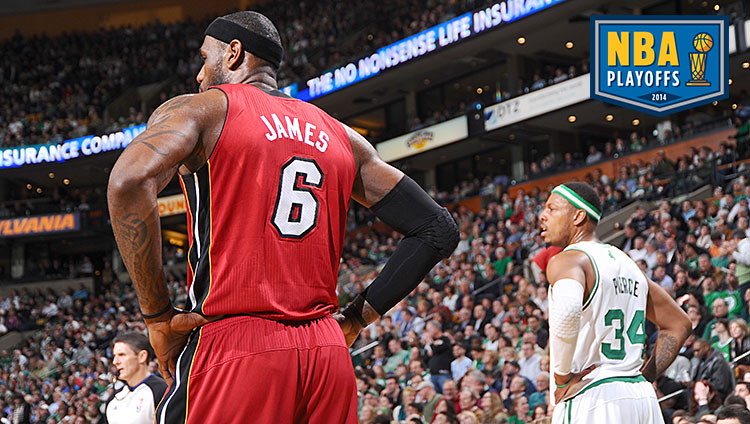 Tonight, the latest chapter in a rivalry that has spanned six years, four teams, all types of dramatic fourth-quarter duels, all manners of grit-n-grind loose-ball dives, and at least one salacious May-December (rumored!) romance, opens. Tonight, the Brooklyn Nets face the Miami Heat in the Eastern Conference semifinals. And so tonight, once again (for the 26th time, to be exact), Paul Pierce and LeBron James will duke it out in a playoff game. Now, let us take a trip down memory lane!

Their personal playoff trajectories wouldn’t line up until 2008, but way before the stakes were high, these dudes were chippy. As Brian Windhorst writes in this great 2012 piece on the rivalry, it started in LeBron’s rookie year, during a game in which Pierce had laid down a hard foul on James, then quickly started chattering with “Otis Carter, the father of James’ friend Maverick Carter and someone whom James considers an uncle.”

LeBron would net 37, a rookie high, but Pierce one-upped him with 41 and Boston won the game. Reports Windhorst, “He told James late in the game he needed to tell Carter to be quiet or he’d go for 50 points. Or at least that is how the story goes.” Mixing it up not with the dude, but with the dude’s uncle? Arguably one of the more Paul Pierce–ish moves of all time. Even when he was a young man, he was an old man.

There were two more notable regular-season incidents, via Windhorst. In 2004, during a preseason game at Ohio State, “Pierce spit toward the Cavs’ bench, for which he was later fined $15,000 … in the dressing room area after the game … tempers flared again in the hallway [and] Pierce’s teammates had to literally carry him away to prevent an altercation.” And in 2006, the two would have a tête-à-tête in Boston, to the tune of 43 for The King and 50 for The Truth.

(Note: If hearing the name “Wally Szczerbiak” said multiple times is not something you’re quite mentally prepared for this afternoon, do not — I repeat, do not — click play below.)

This was the Ubuntu title year for Pierce and the Celts, and so it’s worth noting that the toughest test that team got all postseason came from the Cavs. LeBron dragged his carcass of a supporting cast — notable names: Sasha Pavlovic! Damon Jones! Boobie Gibson! — to the very end of a ragged seven-game series, coming within a bounce or two of X’ing out the Celts, and dramatically altering both his and his frenemy Paul Pierce’s trajectories. In the end, in a Game 7 duel that was the purest face-off they’ve ever had, LeBron’s 45 wasn’t enough to counteract Pierce’s 41 — which included a teetering, tumbling game-sealing free throw.

Also important: This was the series in which LeBron had to politely instruct his mother, after a hard foul from Pierce, to “sit your ass down.”

And while we’re at it: Here’s Pierce quite purposefully yet undramatically not high-fiving a kid in a ‘Bron jersey. Watch him, in the heat of the moment, slide right past the poor child with his eager, outstretched arms, without quite making it obvious he intended to. Such poise! Such grace!

Another semifinals that felt like an Eastern Conference finals, with Pierce and the Celts shocking the favored Cavs in six games. As Windhorst recalls, Doc’s game plan “was to have Pierce concentrate on defending James and not to put as much emphasis on his own offense … Over the last three games of the series, which the Celtics won … Pierce averaged just 14.3 points. But his defense helped the Celtics hold James to averages of just 21.3 points and 34 percent shooting.” That was the blueprint for a couple of years there, as Pierce would willingly admit that guarding LeBron had him just a bit too tuckered out to do much on the other side of the court.

In hindsight, the “shocking” upset is mitigated by just how little, once again, LeBron had to work with. (Notable names: Mo Williams! Anthony Parker! Old Shaq!) But at the time, watching LeBron prematurely huff off the court was just about the nuttiest goddamn thing we’d ever seen. Mike Breen, doing some nice foreshadowing: “The impending free agency of LeBron James … sends the impact of this collapse to another dimension. If he leaves, it would be a disaster of enormous proportions for the Cavaliers.”

Post-Decision villain LeBron, finally taking care of business against the Celtics, and wiping them out in five. (Could have well been four, if Dwyane Wade hadn’t karate-tripped Rajon Rondo, unwittingly inspiring that strange young man to one excellent one-armed fourth quarter.) The Heat were the handily superior team, and yet that didn’t take away any of LeBron’s well-earned elation as he finally got past Pierce and the Celtics. Aww. So happy! So free!

By all rights, 2011 should have been the end of the road for The Big Three vs. The Big Three. But Danny Ainge reloaded, and one more time the old-man Celts clawed their way into a deep playoff run. For one brief shining moment, it looked like they might actually pull it off against Miami (then still without a title and desperately hungry). And that moment was Paul “I’m cold-blooded!” Pierce splashing this 3 in the latter stages of Game 5.

In Game 6, in Boston, LeBron had his monster game: 45 points on 19-of-26 shooting, plus 15 rebounds on top. The Heat won, and so Game 7 back in Miami felt like a foregone conclusion.

That LeBron would have to go through Pierce one more time to get his first title seemed only right. It would have been equally symmetrical to have that playoff stand end Pierce’s Celtics era; that came, instead, at the hands of the (now relatively legendary) 2012-13 New York Knicks. Not that it really matters: Now, the two meet again.

The circumstances continue to shift: These days, LeBron carries as much, if not more, of the load on his side of the equation, while Pierce is allowed to come in for spot duty. At one point, it was traditional warfare, two monoliths advancing on one another with tanks and cannons. Eventually, it became a more modern sort of thing, with Boston theorizing and gaming its way into little mismatches and slight advantages on the battlefield. Now LeBron is the empire, and Pierce is the pesky militia hanging around in the jungles.

It’s kind of an elaboration of the well-known “If you shoot me you’re famous / If I shoot you I’m brainless” corollary: Outplaying Pierce won’t be enough for LeBron, and is considered an inevitability anyway; meanwhile, if Pierce takes some chips off the King, he may well be considered some kind of victor (anything at all like the Lowry block ought to do it). Basically: It’s guerrilla warfare, with LeBron Batista and Che Pierce. And we can’t wait to see them do battle once again.