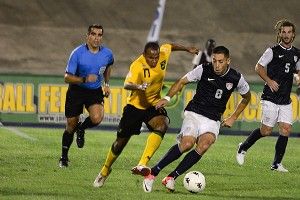 For 36 seconds, things unfolded perfectly. The final strains of Jamaica’s amazing national anthem were still echoing around Kingston’s Independence Park when Clint Dempsey slotted home a rebound of Herculez Gomez’s shot, giving the United States men’s national team a 1-0 lead over Jamaica in an important World Cup qualifying match. The winner of the game would take sole possession of first place in four-team Group A, halfway through the third round. The top two teams advance to the final “Hexagonal” stage of qualifying.

After Dempsey’s goal — the quickest U.S. WCQ tally ever — the USMNT looked set to run their undefeated streak against Jamaica up to 19 matches. But it wasn’t to be. The Stars and Stripes, missing Landon Donovan and Michael Bradley, failed to connect passes, failed to create chances, and failed to deal with Jamaica’s team speed. They conceded few opportunities in the run of play but allowed free kick goals by Rodolph Austin in the 23rd minute and Luton Shelton in the 62nd minute and left “The Office” with a 2-1 defeat.

The loss, while showing a few troubling trends, is not a disaster for the U.S. According to ESPN’s Soccer Power Index, which predicted the home team would win more than 42 percent of the time with the U.S. just below 30 percent, it wasn’t even an upset. The teams meet again on Tuesday in Columbus, Ohio, where the Americans are a massive favorite. A result in Kingston would have been a bonus, but it was far from a necessity.

That said, the defeat does mean the Americans need three points in the home portion of the back-to-back. (The Americans have a good chance to advance with a loss or a tie, but anything less than a win would be embarrassing and the public outcry would be unbearable. Klinsmann wouldn’t lose his job, but you’d really start to wonder.) The U.S. should prevail — they are, Kingston aside, a better, deeper team than the Reggae Boyz — but a team that’s scored zero or one goals in 14 of 17 matches needs to make changes. Some of these will be by default; others need to come from up top, from coach Jurgen Klinsmann, whose golden sheen looks less shiny after the poor performance in the Caribbean.

The Americans had tremendous difficulty keeping the ball in Kingston after the first 15 minutes — 25 if you want to be generous. Part of the issue was the quality of the field surface, which was terrible. Watching the game reminded me of trying to putt on a recently aerated green. The U.S. team isn’t using that as an excuse, but it is a fact. The rough surface, combined with Jamaica’s team speed and decision to press every pass, troubled the Americans. “You take more touches trying to get the ball under control, and they’re so athletic they’re on top of you and tackling you when you did that,” Dempsey said after training in Columbus on Sunday. The field will be better on Tuesday night, which works in the U.S.’s favor.

Concerns about the field aside, the central midfield trio of Jermaine Jones, Kyle Beckerman, and Maurice Edu didn’t maintain possession and didn’t do enough to facilitate the attack. The three are defensive-minded players first, and showed it with their lack of imagination going forward. They didn’t spread the ball wide, preferring to continually shove it through the middle. That plan failed, repeatedly, and neither the central midfielders nor the coach had a solution. Forwards Herculez Gomez and Jozy Altidore barely saw the ball. Worse, the midfielders were late to a number of challenges and repeatedly gave up free kicks in dangerous areas. Referee Marco Rodriguez whistled the midfield trio for 11 combined fouls. Beckerman and Edu committed the infractions that led to the first and second goals, respectively. The U.S. lost the battle for the middle of the field — partially because of Jamaica’s formation, which frequently left the three Americans alone against five opponents, and partially because Beckerman, Edu, and Jones simply were not good on the night.

The absence of Donovan and Bradley, both injured, was glaring. For all the talk of Donovan’s goals, his ability to create something and then pass is his most important quality at this stage of his career. On Tuesday, Brek Shea — who created the goal to beat Mexico — will take on a bit of this role, and Sporting Kansas City’s Graham Zusi could see time out wide as well. Bradley, who does a little bit of everything extremely well, is harder to replace, but the U.S. will get by without him. But it shouldn’t be surprising that a team missing two of its three most important offensive players struggled. (Dempsey, who hadn’t played a competitive match in months, is the other. His contributions, however, come more in sporadic bursts than with the consistent, continued excellence that Bradley especially provides over 90 minutes.)

There were a few bright spots in Kingston. Geoff Cameron had a second straight strong performance as one of the two center backs. His partner, Clarence Goodson — whose surprise start had usual center back and team captain Carlos Bocanegra watching from the bench — was solid if not spectacular, although he’ll miss the rematch because of yellow-card accumulation. Michael Parkhurst filled in adequately for injured Steve Cherundolo at right back. Tim Howard, as usual, did his Tim Howard thing in net.

Roughly 96 hours after Dempsey’s goal, the U.S. and Jamaica will once again line up across the field from each other. This time, the Americans have the advantage of an inspired home crowd. (More than 5,000 supporters watched Sunday’s practice.) Win and the Red, White, and Blue will sit tied with the Reggae Boyz (and, possibly, Guatemala) for first place with two matches remaining. That’s not the ideal scenario. Far from it, in fact. But there are concerns about qualifying every four years. The U.S. should be fine, but they’ll need to be perfect for a lot longer than 36 seconds.