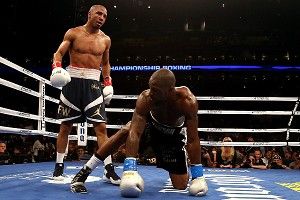 A theory: If you found someone who had never watched a round of boxing, and you made him watch the recent fights of Andre Ward, Floyd Mayweather Jr., Manny Pacquiao, Sergio Martinez, Juan Manuel Marquez, Nonito Donaire, Wladimir and Vitali Klitschko, and anyone else you think might deserve consideration as one of the best fighters alive, that person would choose Ward as the finest boxer on the planet. Of course, several factors go into pound-for-pound designations — a fighter’s body of work, the strength of his opponents, and his status in the sport, among others. Because of this, it seems unlikely that Oakland’s Andre Ward will be recognized as no. 1 before Mayweather retires, but based on the eye test alone, it’s hard to imagine anyone looking better than Ward.

Why? Quality. I admit this is strange, but after I watched Ward dominate light heavyweight champion Chad Dawson on Saturday night, I started thinking about the philosopher-mechanic Robert M. Pirsig and his discussion of “Quality” in Zen and the Art of Motorcycle Maintenance. Quality, Pirsig says, cannot be defined. “[It] cannot be broken down into subjects and predicates. This is not because Quality is so mysterious but because Quality is so simple, immediate and direct.” Basically, you know Quality when you see it, but your attempts to explain it won’t quite add up to a full picture of “Quality.”

As a boxer, at this moment in the sport, Andre Ward’s Quality seems peerless. Sure, we can point to concrete things he did to defeat Dawson, a fighter believed to be just a few notches below Ward in the pound-for-pound rankings before Saturday’s wipeout. Ward’s footwork took away the angles that Dawson typically uses to control a fight with his jab. Without the jab, Dawson was a sitting duck for Ward, who spent much of the fight lurking on the outskirts of Dawson’s punching range, then pouncing in with lethal speed and precise timing to tag Dawson with lefts and combinations. These moves dropped Dawson three times en route to a 10th-round TKO. When the fighters clinched, Ward kept working, chopping and digging with his free hand, and his persistence paid dividends — most notably a pair of savage eighth-round uppercuts. At long range, Ward stayed just beyond Dawson’s long reach, and at close range he smothered Dawson’s blows. In more than nine rounds of boxing, Dawson only landed 29 punches against Ward.

And yet the list of tactics Ward used in his dismantling of Dawson doesn’t fully explain the strength of his performance — its overall Quality. He looked unbeatable, and this was against probably the best opponent he has ever faced.

Another thing Pirsig says about Quality: “[It] tends to fan out like waves. The Quality job he didn’t think anyone was going to see is seen, and the person who sees it feels a little better because of it, and is likely to pass that feeling on to others, and in that way the Quality tends to keep on going.”

So let’s keep the Quality going. Andre Ward’s talent as a fighter deserves to be witnessed more than it deserves to be described. Here are three of his most significant fights — the most recent one against Chad Dawson, Ward’s 2011 defeat of Carl Froch, and his 2009 technical decision over Mikkel Kessler.