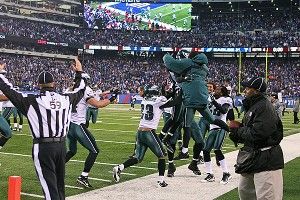 There is a specific play in football that I hold dear to my heart: the visiting team walk-off touchdown. The sound of of thousands of people simultaneously having their hearts broken is almost as exciting as the sound of thousands of people simultaneously getting hysterical over a victory. We’re talking about the range of human emotions here, folks. It’s the thrill of victory and the agony of defeat.

All those words you just read are an excuse for me to post about Michael Vick and DeSean Jackson.

First there is the one that I intellectually know is the greatest walk-off touchdown I have ever seen.

That is the artist formerly known as Mike Vick running 46 yards, finding a hole in the space-time continuum, and leading the Falcons off the field after beating the Vikings, 30-24, in December of 2002. This is the kind of thing alien civilizations are going to watch to see what we as people were capable of. It belongs in a museum.

This one belongs in my heart.

Are you kidding? I think I freaked out harder at this than when the Phillies beat the Rays in the World Series. I definitely lost it more at this than when Donovan McNabb converted a fourth-and-26 in a 2004 divisional playoff game against the Packers. I think this DeSean play made me briefly telekinetic. I was able to move furniture around with my mind. But the best part of walk-off touchdowns isn’t really the touchdown. It’s the walk-off. It’s the celebration it triggers.