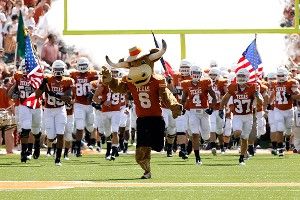 Sorry, you’ll have to give me a second here. We Texas Longhorns fans suffered a loss the other day. Not a death or anything. We had a decommit.

Ricky Seals-Jones, a wide receiver from Sealy, Texas, was being recruited by the Longhorns. In February, he said he wanted to be one of us — that is, he committed. In June, he changed his mind. A decommit is a stranger ritual than Mark Appel refusing to sign with the Pirates, or Jeremy Lin taking the offer sheet from Houston. A decommit isn’t about money. It’s not about a salary-cap gimmick. It’s a public unfriending.

Through reading message boards — which is what I’m doing when the Grantland editors can’t find me — I think I’ve discovered the four types of decommits:

The Better-Offer Decommit: The most common by far. A recruit pledges to a so-so program — in academic terms, his safety school. When a bigger fish comes along, the recruit trades up. Remember the name Tavares Garner; we’ll return to him in a second.

The “I Moved” Decommit: A personal favorite, seen lately with linebacker Reuben Foster. When he lived in Georgia, Foster was an Alabama commit. When he moved to attend Auburn High, he switched to — well, guess. The time-honored cliché “I want to stay close to home” may still hold, but it means something totally different.

The Morals-Clause Decommit: Alex Anzalone of Wyomissing, Pennsylvania, was an Ohio State commit. Then he met a registered sex offender who was lurking around the team during his recruiting visit. He told the Buckeyes to get lost. Penn State had a few of these, too.

Finally, there’s Ricky Seals-Jones. That was an “I’m Not Sure” Decommit. “He decommitted so he can go visit some other schools; that’s it,” his father told ESPN. Even though Seals-Jones still lists Texas as his leader, Longhorns fans have had some trouble coping. Seals-Jones said he got death threats on Twitter and that “a couple cars in my neighborhood we didn’t know would drive by [the] house real slow.”

I want Seals-Jones to play for Texas. He’s 6-foot-5 and 220 pounds, and he could be as physically imposing as a wide receiver as Michael Dyer was as a running back. But here’s why I don’t hold his decommit against him. We fans tend to see recruiting as a mano-a-mano game between coaches and recruits. Coach makes an offer to recruit; recruit weighs his options; recruit performs a strange ceremony with hats; and so forth.

Actually, it’s coaches who have most of the power in recruiting. Recruits are signing a contract that, in most cases, only offers them a one-year, unpaid job. Once they get into school, their transfer options are restricted. The decommit is one of the few weapons a player has at hand.

On message boards, a poster may admit that a recruit can decommit, but it’s framed as dishonorable. (He never mentions this if the decommitter is in the process of committing to his school.) For this to make any sense, you have to think of recruiting as an honorable process. I’ve never understood how someone on a message board can charge every coach in the country with paying players under the table, or charge players with hiring street agents — and then grade like Miss Manners when it comes to etiquette. Recruiting is inherently ridiculous, and the decommit might be one of its few rational acts.

Tavares Garner, whom you’ll remember from the Better-Offer Decommit, said the other day, “I’m looking forward to decommitting.” I’m happy for Tavares. Really. Then again, he decommitted from Texas Tech.