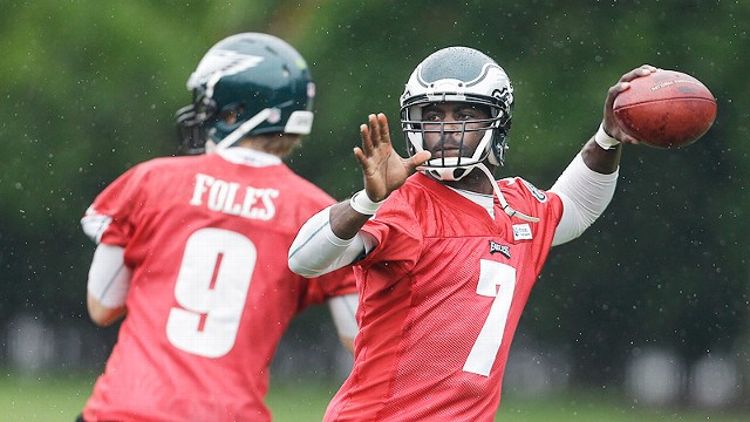 I know what you’re thinking. Most teams don’t even open training camp until Friday, so choosing the winners of the league’s highest-profile position battles before these guys take a single snap is a fool’s errand. To that I say that you obviously aren’t aware of my never-ending quest to embarrass myself. For the next few days, we’ll be anointing starters around the league based on nothing but speculation and guesswork. Because here at the Triangle, we’re all about science.

Five years ago, this is Kolb’s job, no questions asked. With a new GM and a new head coach in place, Buffalo is far from win-now mode, and using Kolb as a stopgap while bringing along an admittedly green quarterback makes a lot of sense.

That plan is rarely seen these days, though. Quarterbacks chosen in the first round spend little to no time on the bench, and teams are rarely content to enter multi-year rebuilding projects. Manuel will be given a chance to win the job, and he should.

Buffalo’s financial commitment to Kolb comes with very little risk. Kolb’s cap hit is $2.5 million, and many of his incentives are dependent on playing time. If Buffalo chooses to go with Manuel, they aren’t losing much. And for as much as Kolb is slated into the Dependable, Experienced Starter role here, there isn’t much truth to that casting. Arizona paid a considerable price to bring Kolb in, but as of today, he has still started only 21 games as a pro. If Kolb is a known quantity, it’s a decidedly unexciting one.

Thanks in part to the new CBA, Manuel also comes with little financial risk, which could actually be a positive and a negative in his bid to start, depending on how you look at it. When teams were forced to shell out about $50 million in guaranteed money to players like Matthew Stafford and Sam Bradford, they didn’t have much of a choice whether to start them immediately. Manuel’s deal comes with a 2013 cap hit of $1.615 million, and with it, much less pressure to perform immediately. There’s a flip side to the relative lack of financial investment, though, and it’s the absence of an obligation for a long-term commitment to Manuel. The stake in first-round draft picks is little more than the pick itself, and that should allow teams to cut ties with flops much more quickly.

When it comes time to make a decision, my guess is that Manuel’s spot as the gem of the Dougs’ (Whaley and Marrone) first draft class means he gets tossed into the fire early.

Gabbert finds himself in the opposite of Manuel’s situation. No level of the Jaguars’ organization has ties to the 2011 first-round pick, and his chance to start may be gone before his third season even begins. Gabbert showed improvement from his first season to his second, but considering he finished 46th out of 47 quarterbacks in DVOA in 2011, there really wasn’t anywhere else to go.

Henne’s 354-yard, four-touchdown performance against Houston was his most memorable from last year, but he followed it with 10 interceptions in his next six starts. At season’s end, he was right there behind Gabbert in DVOA (33 and 32, respectively). By now, we know who Chad Henne is, and the Jaguars do too.

Gus Bradley came out yesterday and walked the “open competition” line adeptly for a guy entering his first training camp, but for as little as the current Jacksonville regime has invested in Gabbert, whatever potential they still envision will eventually be the deciding factor.

I hesitate to even include this one because I’m not sure how much of a competition it really is. The Jets are in full-scale rebuilding mode, they’re paying Sanchez about $13 million this season, and Rex Ryan has come out and said that Smith is a long way from being comfortable in a pro offense. The truth is that it doesn’t much matter who starts for the Jets this year, and that’s why the guy with the massive price tag will get the nod (at least initially) over the guy who’s not quite ready.

The intrigue about the Eagles’ quarterback situation starts at the most fundamental level, as we really don’t know what the professional iteration of Chip Kelly’s offense will look like. It’s unlikely, though, that Vick’s athleticism will provide him with that much of an advantage. At this point, his similarities to Sam Jackson’s character in Unbreakable mean that designed runs for Vick aren’t likely to be a focal point of any offense.

It’ll be the better passer who wins out, and in that capacity, Foles was respectable last season behind a completely decimated line on a crumbling team. It doesn’t seem like it has been very long since Vick was putting together his incredible run in 2010, but he’s been a below-average quarterback for two full seasons now. Like with several of the other situations around the league, the allure of what could be figures to be more attractive than what we know. Kelly has said that no one earned a lead of consequence during OTAs, but by Week 1, I think the chance to see what he has in Foles swings his decision.