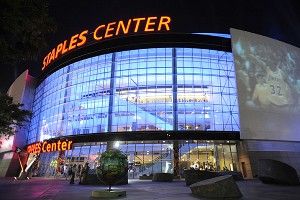 The Clippers beat the Suns 103-86 last week and I didn’t care that much. I mean, congratulations to the Clips and all, but truth be told, I wouldn’t have cared even if the game was close. That’s because my mind was on something much more important: food.

Stadiums and arenas make a huge profit from their concession stands, and fans seem more than happy to put up with outrageous prices for the privilege of eating Frito Pie Dogs courtside. For some reason, $9 burritos seem perfectly justifiable when you’re watching Blake Griffin show off his new moon shoes. While stadiums around the country have beefed up their concession offerings to include more than just hot dogs and popcorn, they’re still a long way from offering quality grub. At Staples Center, you’ve got several different food venues, but if you’re looking for anything out of the ordinary, you have to create it yourself. So I did.

Introducing the Staples Center Secret Menu. If you’re at all familiar with In-N-Out Burger, you’re also familiar with its secret menu. It’s not really secret so much as just being creative with all the offered toppings. That was my guiding principle here: Take items that already exist and turn them into new dishes that pay tribute to my favorite Clippers. If you’re extremely nice to the concession stand workers, they’ll make these for you. Otherwise, you’ll have to play Chef BoyarSterling to put them together yourself.

The Blake Griffin
Blake Griffin is a beast. He’s also a bit of a hot dog on the court. That’s why The Blake Griffin is a showboating hot dog. It’s three dogs all in the same bun. For this one, go to any of the five cleverly named STAPLES’ Staples and ask for a Skyscraper Dog, a Spicy Italian Sausage, and a Baja Sausage. When you get all three dogs together, get rid of the Skyscraper bun and join the other two sausage rolls together. Jam the Skyscraper dog in there between all the toppings, throw on some mustard, and you’re good to go. It’s a PowerDog fit for one of the NBA’s most powerful dudes.

The DeAndre Jordan
While I respect DJ as a player, his greatest asset is clearly his height. DeAndre Jordan has tall on lockdown. To honor his stature, I made the tallest sandwich I could find. That meant a trip to Beyond the Whistle Stop. Order both a turkey sandwich and a pastrami sandwich. You want cole slaw on both for extra inches. Ask them to stack them both together and they’ll tell you that they stopped doing that two years ago EVEN THOUGH IT WOULD BE SO EASY FOR THEM TO DO IT. No matter, though. Just grab both sandwiches, pop the turkey on top of the pastrami, and you’ve got yourself The DeAndre Jordan. Even more fitting — by the time you’re done eating it, this sandwich is definitely going to block you in a most unpleasant way.

The Chris Paul
What do you get for the man that does everything? Mexican food. The Chris Paul is my greatest creation, but mostly because the friendly lady at Camacho’s Cantina was more than happy to accommodate my strange request. Start with a tostada salad shell. Cover the bottom with rice, refried beans, and chicken. Add on a tortilla and fill it up with more rice, carne asada (surprisingly good here), pico de gallo, and pickled jalapeños. For the final layer, you’re doing nachos. Get them scattered all over the top and go loco with the toppings: guacamole, sour cream, shredded cheese, more jalapeños, and the coup de grace: nacho cheese. It’s a meal that does everything, it’s going to take up most of your budget for the night ($27.25), but once it all settles in together, you’re going to be really happy about your acquisition. As a bonus, when I was walking around Staples with The Chris Paul, people’s jaws literally dropped open. Well worth the money.

The Vinny Del Negro
Staples Center has an eating area on the Upper Concourse that’s literally outside the building. It’s called the City View Diner and the whole place looks like a back alley in Times Square. That’s basically where Clippers fans want to send Vinny Del Negro, so I figured it was a perfect place to create The VDN. Based on his uninspired but completely erratic coaching style, The VDN makes no sense. It’s just a bunch of crap on a plate. You get a basket of fries topped with three chicken fingers, a veggie burger, and some caramel corn. Nobody wants that, but order it now because it might not be around after the season.

Jason Kessler writes about food for FoodRepublic.com, BonAppetit.com, and all kinds of other publications. He’s also been known to write for television. You can follow him on Twitter at @thehungryclown.