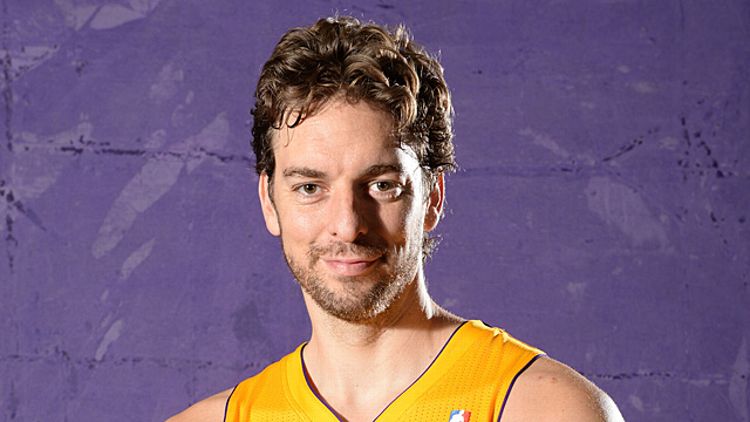 Picture yourself waking up from a multi-day, Pinkmanesque bacchanal. The couch is smoldering, strangers are snoring in the hallway, ominous stains dot the rug, and the detritus of now-departed house guests litter the scene. There, in the dawn light seeping through torn drapes, is a person dutifully bagging the beer bottles, wiping off the counters, and sweeping up the ash. That person is Pau Gasol, and this is Lakers Media Day 2013.

The second decade of the 21st century affords professional athletes more avenues than ever to project their personalities into the wider world. Spoiler: I don’t know Pau Gasol. But, by using various bits of interviews, tweets, League Pass games, comments from teammates and coaches, and newspaper and blog stories, I’ve built up an image of Pau in my mind. And that image is “Nice Guy.” Pau seems like a genuinely nice person. A nice person with sublime big-man skills, who played an integral role in back-to-back Lakers championships, who, last year — his worst year ever — posted 13 points, eight rebounds, four assists, and a PER of 16.7, all while struggling with injuries and the role of combined Guildenstern-and-Rosencrantz in the latest production of Mike D’Antoni’s acclaimed play Hey, Remember When This System Worked?, Dwight Howard edition.

People who don’t fit into our constructed identities for them always end up as objects of ridicule. Pau is Baller, a 7-footer who should be “Banging In The Paint” and providing a “Physical Presence.” But if you eschew dunks for layups and power for positioning, prefer a deft touch with both hands instead of chest-pounding, display an accommodating and sensitive personality instead of a KG-mad-dog-war-face, and — most damningly — come from Europe, then you’ll probably end up being labeled as soft. Nice, sensitive human beings cannot be awesome basketball players. Sociopathy? Cool. Feelings? Not cool. Pau is basically basketball Drake.

Some things Pau did this summer, as gleaned from his wondrously pleasant Twitter feed: looked for musicians for his band, visited children displaced by the brutal Syrian civil war, tweeted pictures of a peaceful stream, read Dance With Dragons, read a biography of Nelson Mandela, read a book about ending child poverty, and had a grueling two-part knee procedure.

Last season, Pau was hampered by injuries and pushed out of position by Dwight Howard. Mike D’Antoni threw more shade on him than the Rocky Mountains at sunset. Magic Johnson called him soft. Kobe questioned the adultness of his metaphorical pants. He was dogged by trade rumors (again) and bandied about as a candidate for the amnesty clause. And despite it all, here he is at media day. Dwight’s gone, Metta’s gone, Kobe’s return is uncertain, and Nash is another year older, with the hips of Betty White; but here is Pau, saying all the right things, probably irrationally optimistic things: He can blend with Kaman; the supporting cast is good; the coach will find different ways to use him.

Expectations are lowered, there’s a chance the team could be bad, the coach who couldn’t figure out how to use him is still there, and Pau is in the last year of his contract. But Gasol wants to stay because, “It’s like a relationship. If you’re still together, it shows improved strength and consistency and how solid the relationship is. Hopefully we’ll see if we can extend it.”

Dude wants to stay and clean up; what a nice guy.