Kam Chancellor, the Unstoppable Force vs. the Seahawks and the Immovable Precedent 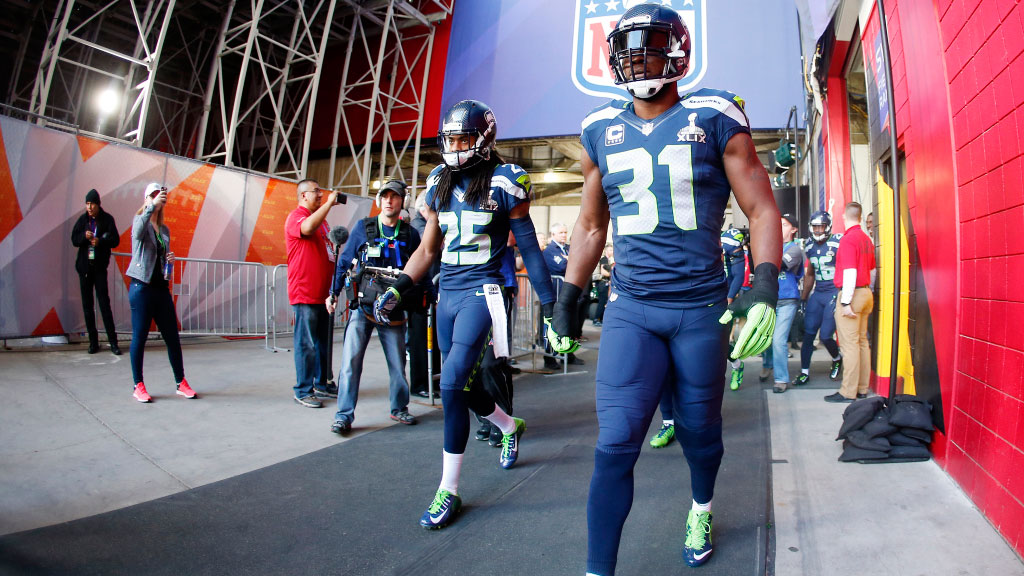 It’s hard to name many football players who have earned more respect than Kam Chancellor over the past few years. In a sport that puts a premium on power, he straight-up flattens people multiple times a game. In a sport that worships toughness, he played with a bruised knee and torn MCL in last season’s Super Bowl. He had 10 tackles in that game, and Pete Carroll called his performance “super human.” Simply put, he’s turned himself into one of the best safeties in football and a charter member of one the most dominant secondaries in history. Now he wants a new contract.

Almost every star player in the NFL deserves more money. The best players in the most profitable sport in America make about the same salary as Michael Kidd-Gilchrist. Their contracts are also almost never fully guaranteed, which is even more amazing considering how much risk they incur compared to other professional athletes. It’s a system that relies on renegotiated contracts to help correct market value and add security, especially later in deals. Dez Bryant signed for $70 million in July, and that was considered a triumphant victory for a receiver. He got Enes Kanter money, can you believe it? The entire league should hold out every year.

It's almost here. For everything you need to know about the new season, follow all of Grantland's coverage.
But Chancellor is in a tricky place. He still has three years left on his deal, and that’s too early to renegotiate. As a former fifth-round pick turned Pro Bowler, he’d been making league minimums when the Seahawks agreed to give him a four-year extension worth $28 million two years ago. It was the first big payday for one of Seattle’s young stars, and at the time it was considered a win for both sides.

From there, he went back to wrecking people as a rule, the Seahawks won the Super Bowl, and everyone was happy, right up until about five weeks ago. That’s when Chancellor’s agent leaked news that his client wouldn’t be reporting to training camp without a reworked contract. This was after Chancellor spent the past two summers watching the Seahawks reward teammates like Bobby Wagner, K.J. Wright, Richard Sherman, Earl Thomas, Marshawn Lynch, and Russell Wilson, whose signing bonus alone is worth more than Chancellor’s entire extension.

For their part, the Seahawks have spent the month planning to start second-year player Dion Bailey in his place, with veteran DeShawn Shead helping out as well. They also traded for Kelcie McCray, a safety from the Chiefs, as more insurance. Meanwhile, despite his absence, Chancellor’s still playing the role of the player who was voted a captain 12 months ago.

“Oh, yeah, I get texts,” Shead said earlier in camp. “He still watches all the film. He’s still tuned in to everything. He will tell me ‘Shead, watch out for this. When you see this play you can play it faster.’ If I made a mistake on something he will tell me, let me know.”

Now it’s Week 1, though. This is getting real.

Pete Carroll made his weekly appearance on ESPN Radio over the weekend and said that even early-season struggles for the Seahawks wouldn’t change the negotiations. “Not really,” he said. “Everything’s pretty well-stated. He knows where we’re coming from, and we know where he’s coming from. So we just have to keep going and do what we need to do, and he has to do the same.”

Seattle’s reportedly received trade offers for Chancellor, but the front office isn’t interested in talking to other teams. For now, the biggest question is whether Chancellor will continue to hold strong and risk forfeiting his first $267,000 game check by sitting out against the Rams.

“We’ve communicated very clearly,” Carroll said. “I know where he’s coming from. He knows where we’re coming from, so that’s what’s going on. This is an important week to see where he is, so we’re ready to go about our business.”

There are all kinds of places we could go from here, but let’s just go back to that first paragraph: In any kind of just sporting universe, Chancellor deserves whatever he wants. He’s definitely worth more than the $4.55 million he’s due to make in 2015. He’s as important to the Seahawks’ identity as anyone on the field.

Earl Thomas is Bruce Banner, and Kam is Hulk.

Even offensive lineman get humbled when they get too close.

I don’t think there’s any player in football who I’ve been more shameless about enjoying the past few years. He’s like a human smelling salt that reminds people every September why football can be awesome. He hits like Russell Westbrook dunks, and it trickles down to the whole team.

All of that is what makes it so depressing to realize the Seahawks shouldn’t pay him. They can’t pay him. He’s reportedly looking to convert the next two years of his contract to a signing bonus, of which Danny Kelly of Field Gulls notes, “In other words, Kam wants the Seahawks [to] guarantee the next two years of his contract, and pay him for it up front.”

It’s usually empty rhetoric when teams balk at renegotiating deals because of the message it would send to other players, but in this case it rings true. This is more survival tactic than negotiating tactic.

Seattle’s already in the middle of a delicate balancing act trying to keep a core of superstars intact — signing Wagner and Wilson in July felt a little like a magic trick — but if the contracts that superstars do sign are rendered negotiable before they’re even halfway done, the whole thing becomes impossible.

It won’t matter if the Seahawks struggle with Bailey starting at safety. No amount of leverage gained by Chancellor will make it worthwhile for the Seahawks to cede leverage to every other star on the roster.

What we’re seeing instead is a situation where nobody is really wrong — Chancellor is right that he deserves more guarantees, and the Seahawks can’t afford to renegotiate every deal — and now everybody’s losing. Chancellor has the perfect team in the Seahawks, where he’s surrounded by players who hide his weaknesses and allow his strengths to wreak havoc. And the Seahawks have the perfect safety in Chancellor, a human knockout punch next to the suffocating coverage of Thomas and Sherman.

Here’s to selfishly hoping that Chancellor will report later this week and wait until next summer to resume this fight. Maybe the players expecting him to miss the entire season will seem melodramatic by Sunday.

Until that happens, the Seahawks are missing a team captain, and the rest of us will be left missing a player who personifies most of what makes football great. There’s no great insight into NFL business here, except that sometimes it sucks. Now Kam Chancellor personifies that, too.

The Harvey Affair: Matt, the Mets, and Moral Hazard