Sweating Off the Hangover in Philly 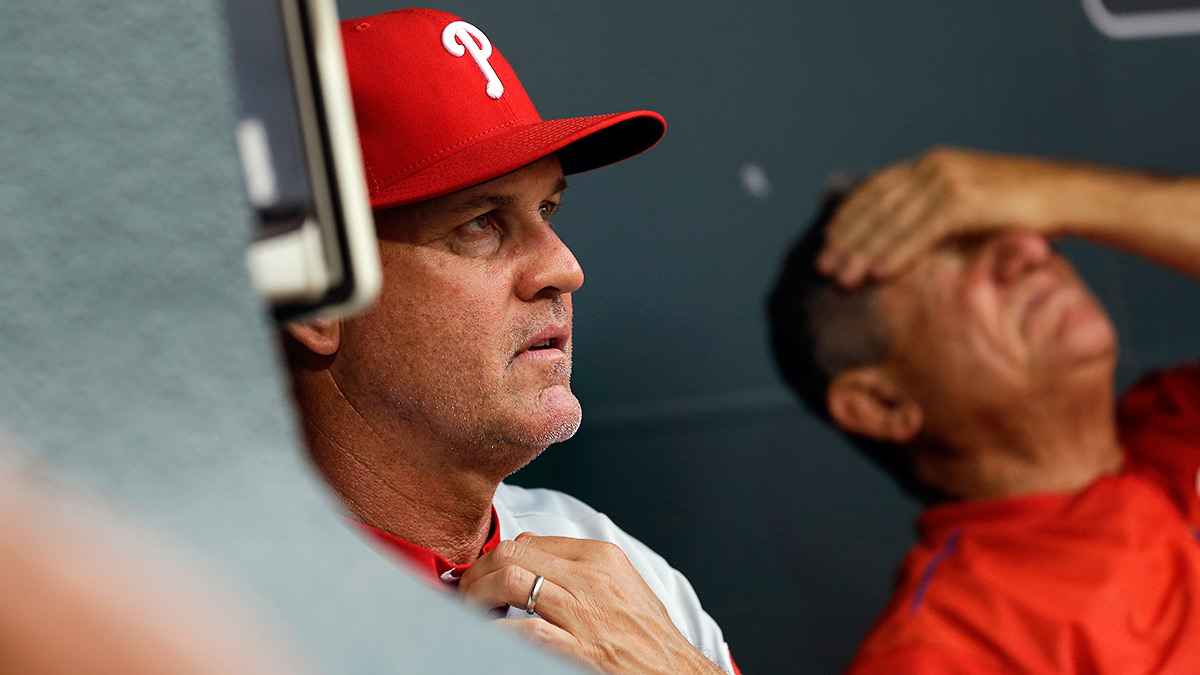 Conventional wisdom says that right now the best team in baseball is the St. Louis Cardinals, who are five games ahead of any other team and who own baseball’s best run differential. But that’s only because conventional wisdom doesn’t consider “Whoever’s Playing the Phillies” a team.

The Phillies are awful. By wins above average, they’re below league average at every single position, and in the bottom three at five different positions. They’re outperforming their Pythagorean record by two wins, but it would be foolish to call them lucky. For the 2015 Phillies, “lucky” would involve a meteor putting them out of their misery.

The moment that best characterizes the 2015 Phillies happened a little more than a week ago, when Jeff Francoeur took the mound in a blowout loss in Baltimore. It was a rare moment of fun, as Francoeur pitched a clean inning, flashing a nice two-seamer and a slider. But when Francoeur came out for a second inning and started to get knocked around, Ryne Sandberg couldn’t get another pitcher up because the bullpen phone had been taken off the hook.

Which brings us to the specific moment: When pitching coach Bob McClure came to the mound to stall, Chase Utley, his eyes full of rage and his lip full of tobacco, monopolized the meeting. What we saw was a player reading a coach the riot act, on the field, during a game, in front of a live television audience. Whatever the cause of the snafu,1 acts of such forceful insubordination as Utley’s don’t happen to coaching staffs that still have the respect of their veteran players.

Friday afternoon, Sandberg unexpectedly said “to hell with this” and went home, fulfilling the fantasy of millions of Delaware Valley residents who’d rather kiss J.D. Drew on the mouth than watch one more moment of this first-10-minutes-of–Angels in the Outfield of a baseball team.

The major league club is painful in every way: There’s a handful of once-promising twentysomethings who saw their potential first overestimated by fans and media, then squandered by a clueless coaching staff. There’s Utley and Ryan Howard looking very much like their best years were a decade ago, providing not so much nostalgia as a flashback to that painful Super Bowl halftime show the Who put on a few years ago. And there’s Francoeur, bless his heart.

Six years after winning back-to-back pennants, and four years after winning 102 games on the back of one of the best starting rotations ever assembled, the Phillies have gone through rock bottom, struck natural gas, polluted the water table, made your tap water unsafe to drink, and set your kitchen on fire.

And it hasn’t been this good to be a Phillies fan in three years.

The best teams — including those Phillies squads from a few years ago — are built on a foundation of homegrown talent, and developing such a core takes forever in baseball. So while the state of the major league team hasn’t been worse in at least 15 years, the state of the organization as a whole is much stronger than it’s been in recent seasons.

The worst occurred either at that moment in 2012 when everyone realized that the good times were over, or at the moment 21 months ago when Sandberg, who’d been promoted to interim manager after Charlie Manuel was forced out, had that “interim” tag scrapped without ownership taking so much as a peek outside of the organization to see if a better candidate was available.2

The past three and a half seasons have been one PR disaster after another, because GM Ruben Amaro has the rhetorical instincts of a 16-year-old boy who just read Camus for the first time, but the Phillies have quietly managed a good couple of years, organizationally.

The Phillies are where they are for thousands of reasons, but the biggest one is that they’ve gotten almost literally nothing from the farm system in the past decade. Since Cole Hamels and Carlos Ruiz came up, the Phillies have given away draft picks to sign free agents, used what draft picks remained on high-risk athletes who never actually learned to play baseball, failed to develop most of the talent they managed to acquire, and traded away what talent they did develop in service of winning from 2007 to 2011.

But since 2011, they’ve hired a new farm director, Joe Jordan, and replaced scouting director Marti Wolever, whose greatest hits include ratting out college draftees to the NCAA for negotiating through agents. And once the Phillies started picking high in the first round again, they made it count. The last two first-rounders Wolever helped select, J.P. Crawford and Aaron Nola, are both destroying the upper minors. Prospect rankings are completely different than they were a generation ago, but the Phillies haven’t had a pair of prospects this highly touted at the same time since Pat Burrell and Jimmy Rollins, if ever. Crawford in particular has a chance to be the no. 1 prospect in baseball if Dodgers shortstop Corey Seager gets called up first.

We’re seeing other fruits of the rebuild, too: Rookie third baseman Maikel Franco is still one of the slowest runners in baseball, and he’ll still swing at anything, but he’s crushing major league pitching at age 22. And while he’s only done it through 41 games this season, it’s better than struggling over the same amount of time.

Amaro’s also been judicious with his trade chips: He’s held on to Jonathan Papelbon and Hamels rather than trade either just to give the appearance of doing something, and both have performed. Meanwhile, when good deals emerged for Rollins and Marlon Byrd this offseason, Amaro pounced, acquiring three potential big league starters for two decent players in their mid-thirties.

Other hints of competence abound: This time around, the interim manager, Pete Mackanin, isn’t next in line to take over — he’s a caretaker, a lifelong assistant coach keeping the house in order for the time being. And Andy MacPhail is set to be announced as the new team president today, empowered not only to find Mackanin’s successor but to decide Amaro’s fate. MacPhail doesn’t have the visionary reputation of a Theo Epstein or a Billy Beane, but he’s done this before. He’s a professional and presumably knows what he’s doing, which is the kind of muted praise that’s cause for joy when you’ve seen the alternative up close.

It’s easy to look at the state of the Phillies now and crack jokes, but rock bottom has come and gone; all you need to understand that is a little optimism and a little patience. Fortunately, Philadelphians are renowned as being both patient and optimistic, so I can’t see how this could possibly go wrong.

A Tradition Unlike Any Other: Dirk Nowitzki’s Annual Celebrity Baseball Game