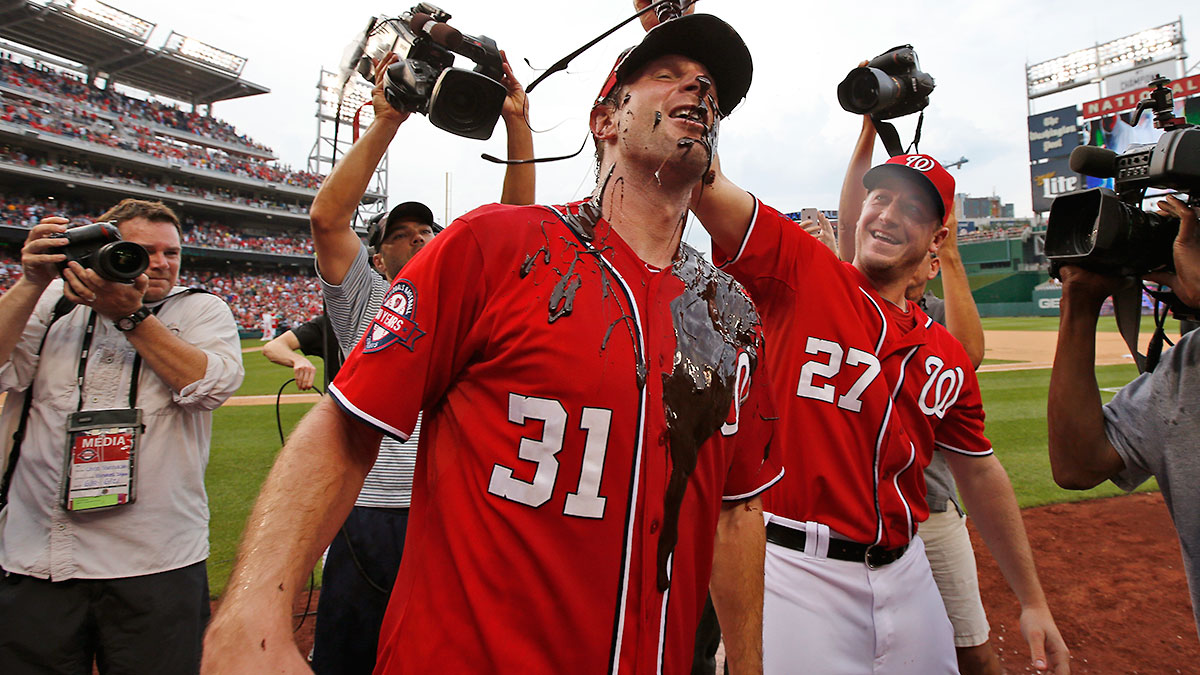 In the seven-plus seasons in which eyes in the sky have tracked every pitch thrown in Major League Baseball, 283 breaking balls have been thrown to right-handed hitters within one square inch of the 87 mph slider that Nationals starter Max Scherzer threw to Pirates pinch-hitter Jose Tabata on Saturday. Prior to that pitch, which came with one strike separating the Nats’ new ace from a perfect game, none of those balls had hit a batter. Tabata, with an assist from his elbow guard, broke the streak.

Three conditions must be met for a hit batter to be awarded first base. First, the batter has to take the pitch: check. Second, the pitch has to be outside the strike zone. This one was: A taken slider to a right-handed hitter, in that location on a 2-2 count, has a 0.4 percent chance of being called a strike, according to Pitch Info. Third, the batter has to make some attempt to avoid being hit by the ball. Tabata, who was widely criticized for not making more of an effort to get out of the way, told reporters that he didn’t bail out because he was waiting for the slider to break. Current and former MLB pitchers supported his story, and Scherzer didn’t disagree. Nor did any other Nationals, judging by the fact that Tabata survived Sunday without being beaned again (this time intentionally).

Regardless of whether Tabata broke a rule, unwritten or otherwise, the fateful slider was an imperfect pitch, flat and far from its target. And while that pitch colored much of the coverage of Scherzer’s near-perfect game, it seems unnecessarily negative to dwell on one pitch that wasn’t well executed from a day when so many were. Scherzer recovered to retire the next batter, Josh Harrison, preserving the no-hitter and completing an incredible two-start sequence. In his previous start, Scherzer had one-hit the Brewers, walking one and whiffing 16; on Saturday, he struck out 10. That’s a two-start tally of two complete games and three baserunners, none of whom reached scoring position.

Only two pitchers since 1920 have posted a higher combined Game Score in consecutive starts than Scherzer’s 197: Angels starter Dean Chance, in June of his 1964 Cy Young season (210), and Padres starter Clay Kirby in September 1971 (199). Both of those streaks included a plus-sized start — 14 innings for Chance, 15 for Kirby — so Scherzer now owns the highest combined total for consecutive nine-inning starts. Game Score isn’t adjusted for offensive environment, and Milwaukee and Pittsburgh aren’t offensive juggernauts this season, but beyond a certain level of excellence, there’s no need to nitpick. 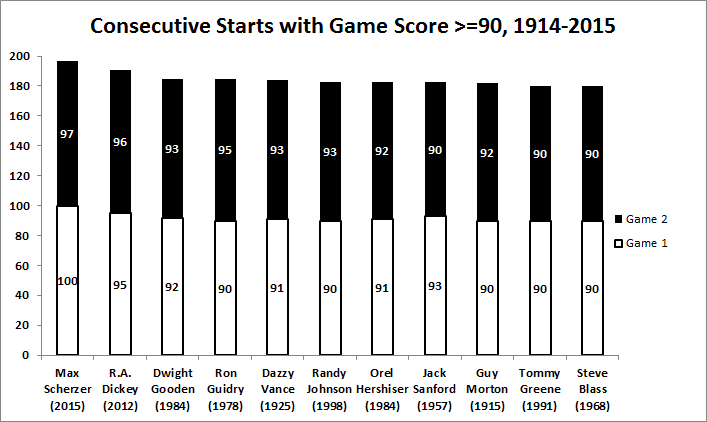 Scherzer’s no-hitter wasn’t a bolt out of the blue, like Chris Heston’s. Scherzer is a former Cy Young winner who got a $210 million free-agent deal five months ago: He’s supposed to have no-hit stuff. The real surprise is that Scherzer has been even better than the pitcher the Nats thought they were paying for, and not only in his last two starts. The usual procedure when signing a 30-year-old free agent (particularly a pitcher) to a long-term deal is to hope like hell that the player has the decency to decline gradually, coming close to approximating his past performance for a few years before falling off a clip. Scherzer, who leads all 2015 pitchers in WAR at both Baseball-Reference and FanGraphs, still appears to be peaking. For once, Scott Boras’s statements about one of his client’s superlative skills sound downright reasonable.

It helps, of course, that Scherzer is now in the National League. It’s not a complete coincidence that the last 11 no-hitters (including a combined one) have come in NL games; the odds of avoiding hard contact are slightly less long when 27 outs is actually 25 plus a pair of wet newspapers. NL pitchers have gone 1-for-26 against Scherzer this season, with one walk and 10 K’s. On top of that, the righty has faced the Phillies — to this point, one of the worst-hitting teams of the wild-card era — three times, and only three of his 14 starts have come against lineups that have been better than the MLB average. Of 128 pitchers who’ve thrown 50 innings this year, Scherzer has seen the second-weakest opposing batters. Last year, in the AL Central, the quality of his opponents ranked closer to the top than the bottom.

Perhaps in part because he knows his opponents are easier outs, Scherzer has been throwing pitches over the plate like he never has before. Scherzer’s 70.8 percent first-pitch strike rate places third among all pitchers with at least 50 innings pitched, and the increase relative to his 2014 rate (63.3 percent) ranks fourth-highest among regulars from both seasons.1 And he has a higher overall percentage of pitches in the strike zone than all but three other qualified starters (Bartolo Colon, Phil Hughes, and David Phelps), which represents this year’s second-largest zone rate rise. Scherzer used to visit the strike zone more often in certain counts. Now he lives there full-time.

Scherzer’s newfound affinity for the strike zone has had dramatic effects. Last season, Scherzer had 1.3 times as many plate appearances in which he was ahead in the count as he did plate appearances in which he fell behind. This season, the ratio is up to 2.4. When a pitcher is always ahead, he should, theoretically, allow weaker contact — and Scherzer has allowed a lot of softly hit balls, according to both Statcast and Inside Edge’s batted-ball data.

The most amazing thing about Scherzer’s evolution is that he’s managed to pound the strike zone and miss more bats, two things that are tough to do in tandem. In the PITCHf/x era, 11 qualified starters have boosted their zone rates by at least four percentage points from one season to the next. On average, they’ve also seen their contact rates rise by roughly half as much. This is intuitive: Hitters make contact more often when they swing at pitches in the strike zone, so the more in-zone pitches there are, the more contact there should be. But Scherzer’s contact rate, despite all those theoretically hittable pitches, has decreased by almost two percentage points, because he’s also induced more chases when he has ventured outside the zone. He shouldn’t be able to do that.

If you divide zone rate by contact rate and sort in descending order, you get a list of starters who are good at getting whiffs while staying in the strike zone. As one would suspect, these arms are among the elite: Hitters can’t make contact against them, but they can’t wait for walks, either. Here are this year’s top five:

Among qualified starters since 2008, the two best seasons by this made-up metric — I’m calling it Strike-iness — are Cliff Lee’s 2011 and 2010, at 74.8 percent and 73.2 percent, respectively, far below Scherzer’s current mark. Essentially, Scherzer is pitching like peak Lee with a 2 mph upgrade.

If there’s a secret to Scherzer’s figurative ascension, aside from further smoothing of his mechanics or the always-hard-to-detect refinement in command, it might be that he has literally set his sights higher. Since 2013, the leaguewide rate at which pitchers throw “high” pitches — those in the upper third of the zone and above, as defined by ESPN’s TruMedia tool — has fallen by about two percentage points, as pitchers have chased the sinking strike zone. Scherzer’s pitch locations have trended in the opposite direction. Of 75 pitchers who threw at least 100 innings in 2013 and have thrown at least 50 innings this season, Scherzer’s nine-percentage-point increase in “high” pitches between the two seasons is second only to Rick Porcello’s. Scherzer’s average fastball today crosses the plate about 5 inches higher than it did in his Cy Young season, and as a general rule, whiff rate increases with height. 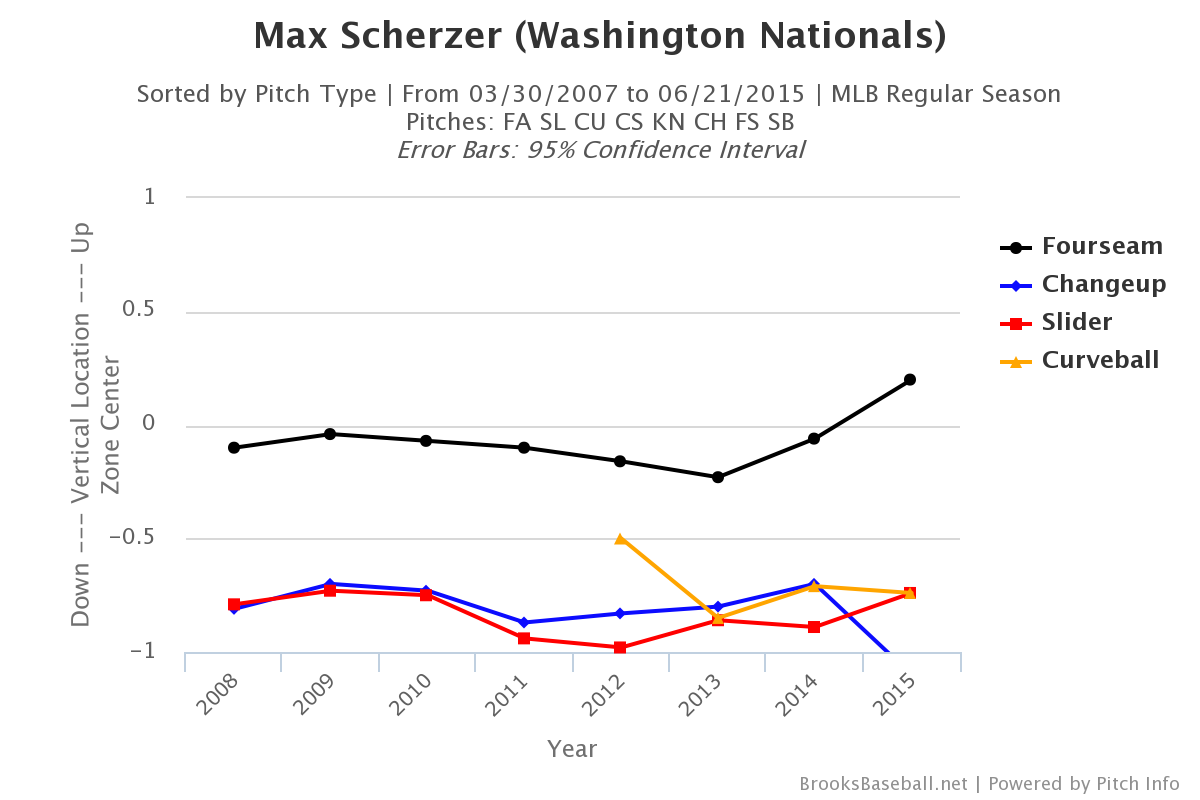 Both of these developments contributed to Saturday’s gem: Scherzer threw strikes on more than three-quarters of his pitches, a higher rate than he’d recorded in any start since his rookie season, and went up 0-1 on 22 of 28 batters. He also threw a season-high 54 percent of his pitches in the upper half of the zone or higher.

The hubbub over the no-hitter was a subplot in an up-and-down season-long story. The win put Washington back into first place, which would still be out of reach if ownership hadn’t splurged on Scherzer. Initially, Washington’s signing of Scherzer seemed like the lead-up to a trade. When the Nats instead held on to all their arms, it looked like gluttony. Lost amid the hand-wringing about Tanner Roark’s rotation spot, though, was the lesson that a surplus usually sorts itself out. Last year, the Nats supposedly had too many position players. This spring, they had so many aces that they couldn’t make room for the merely above-average. Neither scenario turned out to be true: Doug Fister has missed much of the season with injuries, and Stephen Strasburg has been more valuable on the DL than he was on the active roster. As expected, Washington’s rotation leads the majors in WAR, but Scherzer alone has been almost as valuable as the rest of the team’s starters combined, propping up a roster that has suffered from the absence of Anthony Rendon. Meanwhile, Scherzer’s old team, the Tigers, are down to between two- and three-fifths of a reliable rotation, wondering whether they spent wisely as they watch Justin Verlander and Victor Martinez painfully fail to produce.

So what feat will Scherzer perform for his next demonstration of dominance? The record for combined Game Score in three consecutive starts is 271, set by Roger Clemens in 1998. To top that, Scherzer would need to post a 75 in his next outing, which should be a cinch compared to his past two starts. Especially since he’ll be facing his new best friends, the Phillies.

All stats are current through Saturday’s games. Thanks to ESPN Stats & Info, the Baseball-Reference Play Index, Rob McQuown, and Hans Van Slooten for research assistance.