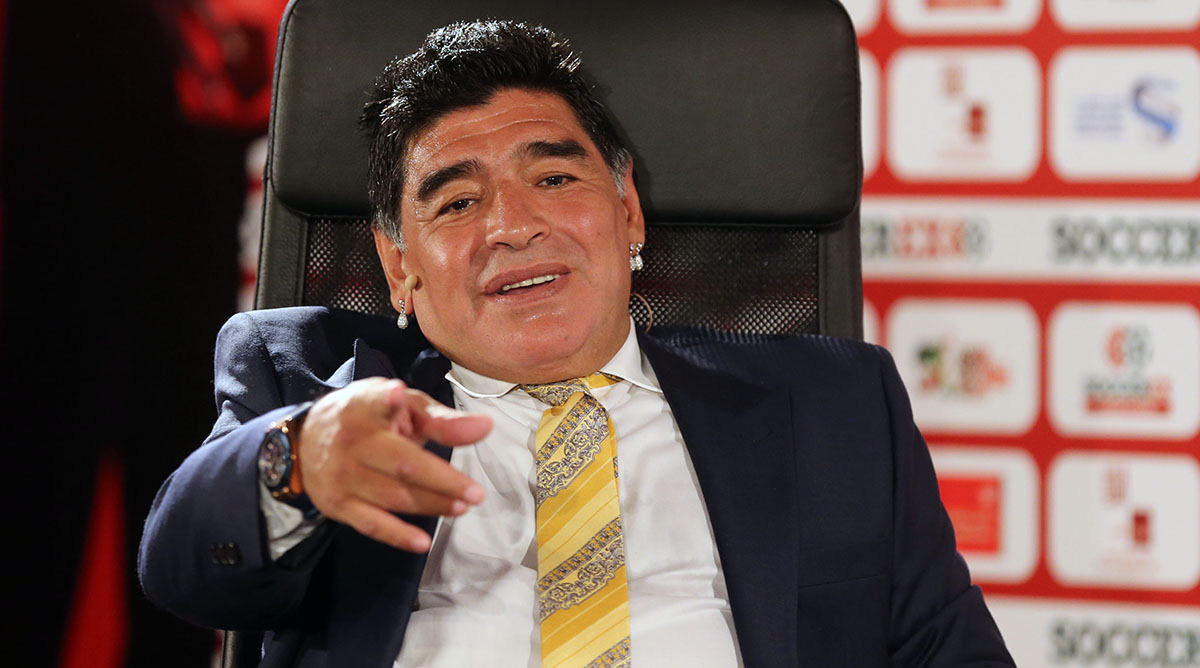 Reports from South America are suggesting that Argentine soccer great Diego Maradona is planning a run to replace Sepp Blatter, the disgraced president of FIFA, as the head of world soccer’s governing organization. Grantland has obtained an exclusive copy of Maradona’s campaign platform and has reprinted the text below. The title of the document, written in elaborate calligraphy on a sheet of pale orange paper, is “Let’s Fuckin’ Do This!: An Explanation of My Principles.”

I, DIEGO ARMANDO MARADONA FRANCO, do herewith perform and consecrate the following observations, reflecting the nature of the great game of football and how it may be salvaged from these jerks.

1. CONCERNING CHICKENS. The chicken is a noble beast, yet we stand firm in our conviction that the chicken has no place on a football pitch. A chicken that could talk and that ran around all day screaming “I am Diego Maradona, and my hepatitis is much better, thanks!” would be a terror to player and spectator alike. WE SAY NO to talking chickens who impersonate us and shout updates about our hepatitis.

2. CONCERNING MEMORY. Life is a vale of tears, as the poet said, but dwelling on past hurts only prolongs present suffering; therefore, during all football and football-related activities, we STRICTLY FORBID remembering the time your beloved goldfish, Diego Maradona, was poisoned by a chlorine pellet that your children’s nanny dropped in his tank because hoo boy that lady was a junkie.

3. CONCERNING GRENADE CLIPS ON AMMO BELTS. Football is a place of joy and safety for all the world’s children. If you choose to wear live grenades on your ammo belt, it is IMPERATIVE that those grenades not explode during a match. This is ON YOU, ESPECIALLY if you are refereeing.

3a. An exception to the prohibition on live grenades may occur if a talking chicken wanders onto the pitch and begins screaming “I am Diego Maradona” and then anything whatsoever about hepatitis.

3b. Example: You are at the World Cup enjoying a frosty glass of Budweiser when who should appear but Diego Maradona, the talking chicken who loves nothing more than sharing personal Hep-B alerts. You have a chain gun. NOW IS THE TIME TO LIGHT THAT MOTHERFUCKER UP.

3c. I want you pumping that chicken full of a never-ending cascade of hot metal, roaring until your throat burns, making the chicken’s little body dance and twitch under the hail of gunfire until nothing remains but a mangled chicken corpse surrounded by bullet-craters and a foam of blood with little bits of beak and feather in it.

3d. You are now under arrest, for you have murdered Diego Maradona, the president of FIFA, in front of 50,000 witnesses.

4. CONCERNING YOUR MURDER TRIAL. You will be provided with a lawyer at FIFA’s expense. If you need more lawyers, take all you want. FIFA will fund and create a special “lawyer closet,” where hundreds of lawyers will be kept night and day to defend anyone who kills the president of FIFA with a chain gun. The new motto of FIFA is “accidents will happen [shrug].” A special team of lawyers will also be assigned to arrange bail for FIFA’s most notorious serial criminal, the master jewel thief Diego Maradona (get this: He’s a panda bear).

5. CONCERNING YOUR ROLE IN THE URANIUM MINES. Should your 2,735 lawyers fail to exculpate you, you will be sent many miles underground to the great caverns of FIFA, where you will mine for uranium for the rest of your natural days. Here, great stone men called Towering Armandos will act as your jailers, whipping you with bullwhips when you misbehave. Do not misbehave. Our stance is clear: It is time to end corruption within FIFA.

6. CONCERNING YOUR DARING ESCAPE. What’s this? Your cellmate is a talking panda bear? And he happens to have in his pouch a tiny plastic baggie with a goldfish in it? DIEGO MARADONA, YOU SURVIVED??? At first you don’t get along, but soon, soon you are a team. Now it is time to outwit the Towering Armandos and make your run to the sweet milky daylight of freedom!

7. CONCERNING THE HELICOPTER CRASH AND YOUR SUBSEQUENT WRIST SURGERY. The first lesson of football is teamwork. But teamwork is impossible when the pilot of your escape chopper is a goldfish who has no hands. Like, think about it! Ha! How could he even steer! Fortunately you crash into the side of an orphanage, which cushions the blow somewhat.

8. CONCERNING YOUR GROWING SUSPICION THAT THE GOLDFISH DIEGO MARADONA IS IN FACT NOT DIEGO MARADONA AT ALL BUT A DEMON INHABITING THE BODY OF THAT MAGNIFICENT PISCINE PET. At this point, you are working as an assassin, or “cleaner,” for a fascist guerrilla troupe in the mountains. This makes it easy for you and the panda bear Diego Maradona to take the goldfish Diego Maradona to a small village where there is an exorcist, a bison working under the assumed name of Diego Maradona.

9. CONCERNING LARGE AMOUNTS OF COCAINE. There is NO PLACE for cocaine within football. Away from football? Sure. In the locker room? Go for it. If you are a bison exorcist tasked with removing the demon from a strangely reanimated goldfish? Friend, you’d be crazy NOT to do a few lines.

10. CONCERNING THE FINAL CHICKEN OF FIRE. Out of the flopping, gasping form of your friend, the goldfish Diego Maradona, there rises and swirls a mystical flame, which coalesces slowly, above the campfire, into the form of a great fiery chicken with eyes of doom. It stares down upon you with glittering malice. “I am Diego Maradona,” it squawks. “I had … hepatitis. BUT I AM BETTER.”

“Dieeeeeeeeeeee,” you wail, unsheathing from your hip scabbard your sacred dagger, Sir Bobby Robson. (NOTE: You have a sacred dagger called Sir Bobby Robson.) Holding Sir Bobby Robson by the blade, you draw back your surgically repaired wrist and fling it forward as hard as your arm muscles will allow, sending Sir Bobby Robson spinning through the air, blade over hilt, toward the savage face of the chicken-demon. The chicken emits a scream as the dagger pierces its eye. There is a roar like a helicopter colliding with the side of a children’s dormitory. All the stars in the heavens flare out, then the sky goes dark. In the light of the campfire there remains only you, the panda Diego Maradona, the pseudonymous bison Diego Maradona, and the goldfish Diego Maradona, who can breathe air like a person now.

You have done it. You have triumphed over evil. Breathe deep in this moment, my friend.

You are under arrest, for you have once again murdered the president of FIFA, Diego Maradona.

Thank you for your vote.