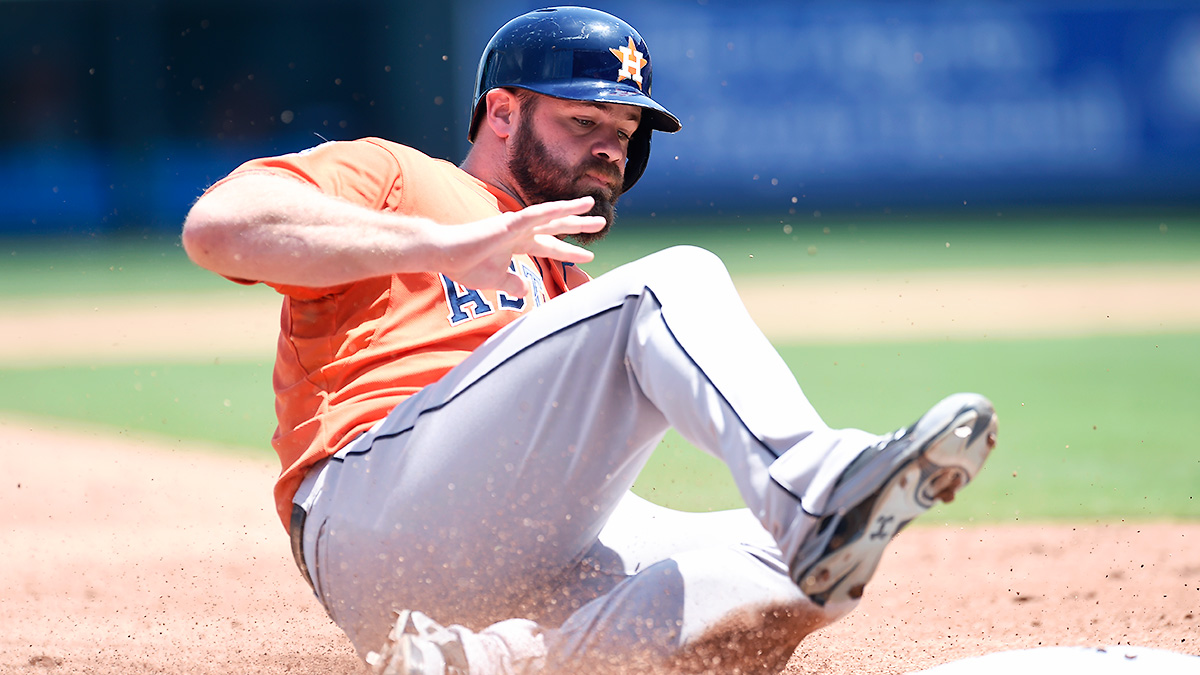 Evan Gattis is a bunch of fun. I used to bag on him because Braves fans thought he was better than Jason Heyward, which he wasn’t and isn’t, but I’ve come around. He bats barehanded from a strange stance, with his butt sticking almost all the way out of the right-handed batter’s box and his torso extending back toward the plate like the head of a cow trying to lean through a barbed-wire fence.

He hits for a lot of power, but never walks, and, despite being a nominal catcher, he doesn’t defend any position well. But he’s been a perfect fit this season in Houston, where right-handed power hitters have the Crawford Boxes to aim for, and where there are plenty of good defensive outfielders to lean on.

Gattis wears probably the tightest uniform in the game, and while Dan Uggla deservedly endures a lot of mockery for wearing extra-small jerseys, Gattis doesn’t. This is because, at 6-foot-4, 260 pounds, Gattis is larger than we could have reasonably expected a baseball player to be. He has a beard not because it’s cool, but because men like him have beards the way most of us have a liver or kidneys — as a necessary life function.

Gattis, as it’s well known, took a circuitous path to the big leagues, and along the way, he played college ball at the University of Texas of the Permian Basin, which sounds like an episode of Star Trek in which the crew of the Enterprise has to make first contact with the rock creatures of the Permian Basin on the planet Gattis Five.

So it’s become a source of great joy that on a team with quite a few guys who can both hit and run — Carlos Correa, Jose Altuve, Carlos Gomez, Colby Rasmus, and the now-injured George Springer — Gattis leads the Astros in triples, with nine. In fact, he has more triples than the rest of the Astros combined. He’s tied for the second-most triples in baseball.

Gattis had tripled only once in his career coming into this season, and the closest we’ve ever come to seeing a player this big tripling this often was when Yasiel Puig tripled nine times last year. But Puig looks like a ballplayer; Gattis looks like the truck from Duel with a bat.

So in honor of this ungainly colossus, this anthropomorphic barbecue smoker, this Iowa-class human being having hit nine triples this season, let’s rank them. And because these triples are beautiful testaments to human creativity, I’ve named each one after the work of art, music, or literature that it most resembles.

There’s a reason that this is the only one of Gattis’s triples not to have a stand-alone highlight (go to the 2:46 mark to see it).

I love Lorenzo Cain. Outside of the obvious guys — Puig, Trout, McCutchen — he’s probably my favorite position player to watch right now, in large part because he’s a sublime defensive center fielder. But he runs a mile to get this ball, then drops it, then kind of staggers after it for a while like a toddler chasing a kitten. Not a great moment for anyone.

Bumgarner thought this one was gone off the bat. And as much as I don’t like giving outfielders a hard time for not robbing home runs, Gregor Blanco probably should’ve had this one. This triple’s fine, but it was kind of fluky without being particularly funny.

The highlight of this video is how Gattis’s left quad is bulging out of his pants leg as he’s waiting for the pitch. He’s got to get some bigger clothes or one day they’ll tear, like when one of the kids from Animorphs turned into an elephant or something.

There’s nothing particularly special about this, except one bit in the commentary.

There’s a line from The West Wing that always makes me laugh. It comes right after Will Bailey joins the senior staff, and his new colleagues are giving him a hard time, and he complains to C.J., “You put olives in my jacket again!”

It’s the “again” that really makes the line, because the idea of putting olives in someone’s jacket is bizarre and hilarious, and that one word adds a layer to the joke — this ridiculous thing has now become so routine that it’s tiresome.

For that reason, it’s hard to hear, “Gattis is going to try for three again!” without feeling particularly immersed in the hilariousness of the whole situation.

This one’s OK. Gattis obviously thought it was gone off the bat, and things could’ve gotten ugly if the Yankees had made a cleaner set of relay throws to third base. We do see a staple of the Big Guy Triple here: Brett Gardner bounces off the wall, then has to run like crazy after the ball as it rolls away. But the next one on this list is a much better example.

This play is nearly identical to the one from a month earlier. But this time, the center fielder who gets bamboozled by the weird carom is Mike Trout, who essentially misread a fly ball, got wrong-footed, and fell over. If Shane Victorino hadn’t been Johnny-on-the-Spot backing Trout up, Gattis could’ve gone for an inside-the-park home run. But because Trout is Trout, this humiliating spectacle involves only a momentary slip before he catches and rights himself. Ridiculous.

The play itself is pretty much a textbook triple, but two things get me about this video.

First, the juxtaposition of Gattis and Springer running the bases: Springer looks like he’s built for speed, while Gattis shuffles along as fast as his legs will carry him.

Second: Gattis gets to third base and seems to appreciate the humor of the situation. He chats with Nick Castellanos and even breaks enough of a smile that we can see it through his James Longstreet beard. This is not always the case.

This is a good one. Perez hangs a curveball and Gattis crushes it the other way. Leonys Martin makes a great play to even get a glove on it, at which point we cut to the big man haulin’ ass around second base. Once again, Gattis would’ve been out if not for a janky relay throw, as Elvis Andrus hit him in the back.

This isn’t really all that funny, but I love it because of the hit itself. Detroit has Gattis shifted all the way to pull, so he sticks the bat out and pokes the ball the other way. And because Gattis has the strength of 10 men, that ball squirts all the way into the right-field corner. Rajai Davis has to run from right center to get there, so he can’t return the ball to the infield before Gattis is popping up from his slide at third base.

You’ll also notice that Gattis, who’d tripled once in his first 251 career games, has by this point pretty much stopped celebrating his triples, abandoning the tomfoolery he displayed after the season’s first triple just three days prior. Instead, Gattis fist-bumps Gary Pettis and goes back to staring off into space, pointing his beard at people like this is now routine.

And we come full circle with poor Lorenzo Cain.

This one isn’t Cain’s fault, because in a normal ballpark he wouldn’t have to try to make this catch. In most normal ballparks, this ball would be four rows deep in the seats, and in the other stadiums in which it would be in play, there’s no topography in fair territory. Cain isn’t the first outfielder to eat it on Tal’s Hill, but because the powers that be have decided that watching stuff like this isn’t fun, they’ve decided to flatten Enron Field’s greatest defining characteristic.

By this point, Gattis has hit four triples in six weeks. This is what he does now. So when he sees Cain fall, he coasts into third, pulls up, and delivers three solid claps before staring off into space, like a stone statue of a lion in front of a bank’s headquarters.

What a majestic hit from a majestic man. I hope he triples every time up.

The Heavyweight Belt of NHL Rivalries