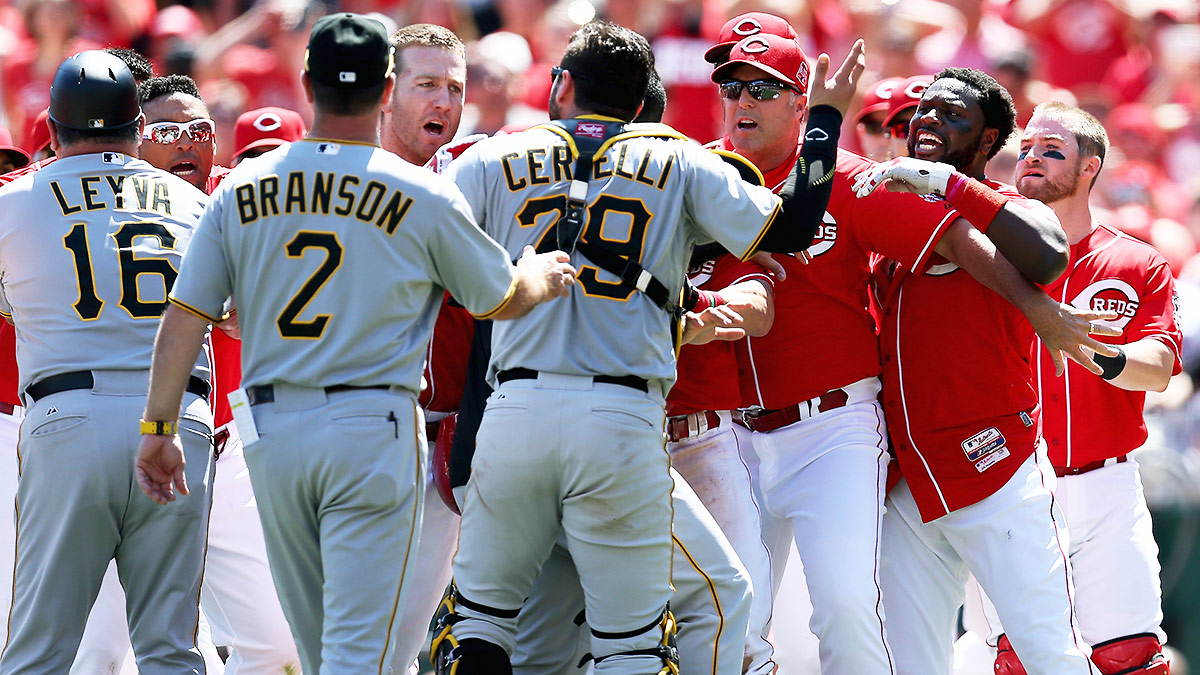 This past weekend, baseball lost its collective cool, as tempers flared and benches cleared in three different countries: the United States, Canada, and Texas. The shenanigans in Pirates-Reds, Royals–Blue Jays, and Giants-Rangers were both a good thing for the game’s entertainment value and representative of a common practice in baseball that threatens the health of its players. There has to be a way to have the good without the bad.

I love it when baseball gets a little nasty. Not everyone agrees, but I wish baseball appealed to a broader range of emotions than it does, because right now, the American version of the game is kind of buttoned down. We don’t get the wild range of emotion that exists in soccer or basketball, or even pro baseball in Asia, because bat flips and trash talk are viewed as gauche or “showing up the opponent.”

For some reason, people think that’s a bad thing. I get that we don’t want Little Leaguers rubbing it in when they win, but pro ballplayers are grown-ups who ostensibly are less prone to getting their feelings hurt. Besides, baseball is really hard. I consider striking someone out or hitting a home run an achievement worth celebrating.

And if that celebration hurts an opponent’s feelings, all the better. Sports are entertainment, narrative nonfiction in a sense, so why not open the story up to a wider range of emotions? Isn’t the whole appeal of the enterprise to dive headlong into the drama of human competition? Doesn’t anger heighten that drama?

Baseball fans don’t get to enjoy the kind of red mist-inducing, viscerally thrilling, primal adrenaline rush of the threat of violence that comes from watching hockey or college football. Sure, we all say that we want to be classy and drive German cars and use all the forks in the right order, but bourgeois propriety doesn’t make you feel conspicuously alive. You know what does? Eating messy food with your hands. Getting day drunk. Swearing in public. We know this is true because people go to Myrtle Beach on purpose.

The problem is that in baseball, anger tends to result in throwing at batters, which, in addition to being bad tactically, can result in serious injury. Plus, it’s sort of sad that grown men think that throwing a baseball at someone is an appropriate thing to do when someone else hurts their feelings, or even when they’re losing a game. I’d go on about how it sets a bad example for The Children, but most kids know not to throw things at people just because they’re upset.

But merely saying that ballplayers should stop throwing at each other, while noble, is less useful than providing an alternative. So how do we keep that simmering, exciting rage alive without people getting hurt? Here are five things that can help. 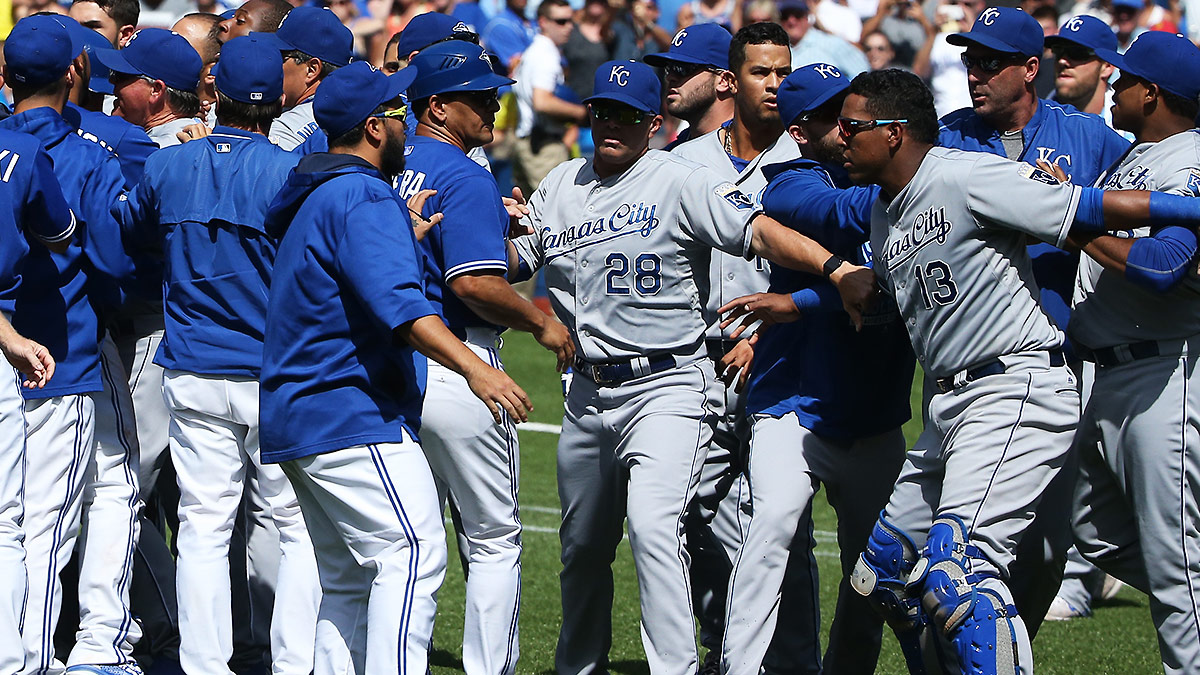 The Royals and Blue Jays brawled on the field on Sunday, then continued sniping at each other in postgame interviews. (Tom Szczerbowski/Getty Images)

Baseball has such an incredible literary tradition that it’s hard to believe the trash talk is so weak. Sure, players train more for delivering clutch hits than sick burns, but it’s embarrassing that baseball players lag so far behind those rocket scientists in the NHL in this area.

I’m not saying that every fourth outfielder needs to be Cyrano de Bergerac, but where’s baseball’s Reggie Miller?

It’s truly a pity that ballplayers don’t seem to appreciate that hitting an opponent with a baseball isn’t actually the best way to wound him. A bruise will heal with time, but the perfectly crafted insult will stick in one’s head forever, and that’s what baseball ought to be aspiring to.

There’s a French idiom, l’esprit de l’escalier, for the feeling you get when you try to come up with a comeback and completely whiff in the moment, then think of the perfect line later. It happens to everyone, and it’s why in-the-moment trash talk is kind of a crapshoot.

To avoid this, I say we encourage trash talk not only on the field, but before and after games, as well. Baseball players and reporters labor under the unfortunate misconception that pre- and postgame media availability is an opportunity to dispense information rather than a platform from which to lob verbal bombs. The opposite of the Jose Mourinho school of public relations, in other words.

This weekend, we got some good lines after games got heated.

Donaldson on whether Wolf should've tossed Volquez : "I don’t want him to do that. I thought it was pretty good hitting." #BlueJays

#Pirates McCutchen on beanballs: 'I don't know what it is. We're too busy winning.'

That’s a good start, but we can go beyond the occasional passive-aggressive snipe. Let’s give Bryce Harper three minutes on camera before each game to explain, in vivid detail, what’s going to happen to Clayton Kershaw’s curveball if that walking neckbeard throws that weakass shit anywhere near the strike zone. That sort of thing.

Some people don’t like bat flips or fist pumps because they make it look like the player’s showing up his opponent, and players don’t want to convey disrespect if that’s not their intention. That’s a perfectly reasonable sentiment, but the solution isn’t to stop pumping fists and flipping bats. The solution is to eliminate any ambiguity by going completely over the top when the intention is to disrespect the opponent.

What we call a “brawl” in baseball usually results from a batter getting hit by a pitch, and is usually just a bunch of guys standing around. Sometimes this escalates into actual punches thrown and serious injury, but most of the time, it’s just a chance for the unused relievers to stretch their legs. Having everyone stand around, with some light shoving mixed in, is much safer and, I’d argue, a lot more exciting than a purpose pitch.

Nobody gets hurt, except maybe Don Zimmer, who totally got what was coming to him.

Maybe, even with all of these safer, more constructive outlets for anger, players will still feel the need to hit someone, or something. Maybe, if Madison Bumgarner has a grievance with Delino DeShields, they should be able to have it out on the infield with foam rubber pugil sticks, American Gladiators–style. This would have the twofold advantage of being much more fun to watch than a beanball war, and of de-escalating the situation by virtue of it being incredibly funny to watch two men try to beat each other up with 7-foot-long Q-tips.

This five-part plan would simultaneously make baseball edgier, more exciting, and safer for all involved, and if MLB is serious about both the quality of its product and protecting its players, we’ll see pugil sticks and wrestling promos in every major league stadium by the start of next year.