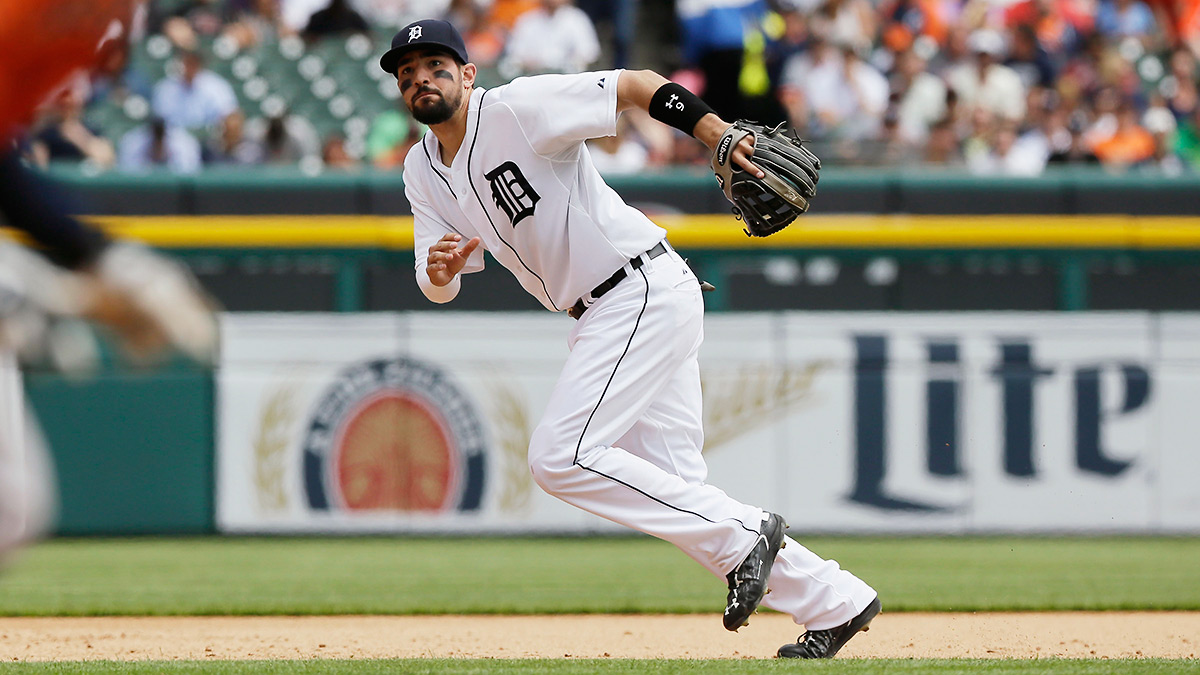 The Detroit Tigers won four straight division titles from 2011 to 2014 by following an effective, if inelegant, formula: Get on base, hit homers, and strike out enough opponents to survive fall-down defensive range. True to form, last year’s Tigers earned a postseason berth despite ranking 28th in Defensive Runs Saved and Ultimate Zone Rating and 29th in Defensive Efficiency, which measures how often a team turns batted balls into outs.

But in manager Brad Ausmus’s second season, his club has made the majors’ greatest gains on defense, rising to fifth in DRS, second in UZR, and 10th in Defensive Efficiency. And it’s a good thing, because that newfound competence in the field has helped the team compensate for increased vulnerability in other areas. Although the Tigers’ lineup is still strong, their formerly lights-out rotation has been about average since losing Max Scherzer to free agency and Justin Verlander to age and injury. On the whole, Detroit’s pitching staff, which missed more bats than any other team’s as recently as 2013, ranks 27th in strikeout rate this season. In a short time, the Tigers’ staff has morphed from one that suppressed balls in play into one that invites them, and the defense has evolved to complement the team’s sudden pitch-to-contact approach. The new formula has worked fairly well: Although the Tigers are trailing the Royals and Twins in the Central, they’re tied with the Angels for the AL’s fourth-best record, and they own the third-best third-order record.

The Tigers owe part of their fielding improvement to roster turnover. Adding Anthony Gose and Yoenis Cespedes and allowing Torii Hunter to leave left less uncovered ground in the outfield, and Jose Iglesias has been better at shortstop than 2014 fill-in Eugenio Suarez (let alone Alex Gonzalez, who briefly tried to play the position at the start of last season). But the biggest improvement has come at a position where the Tigers brought back a player who was already on the roster: No defensive development has meant more to Detroit than third baseman Nick Castellanos’s transformation from one of the worst fielders in baseball into one who appears to be average.

Adequacy isn’t normally something we celebrate, so it’s rare to see the spotlight on a player whose big accomplishment is not being bad. But Castellanos’s defensive struggles last season were so severe that an average rating seemed far out of reach. In 145 games at third base last season, the rookie recorded the worst DRS (minus-30) and second-worst UZR (minus-18.4) of any major leaguer. This year, through roughly one-third as many innings, his DRS and UZR are 0 and 1.7, respectively. If Castellanos maintains an average rating at third for the full season, he’ll have completed one of the most dramatic statistical turnarounds on record. In the past 10 years, only Ian Kinsler (2009) and Matt Kemp (2011) have improved their DRS by 30 runs in consecutive seasons of at least 1,000 innings played at the same position.

Defensive statistics are subject to large fluctuations in small samples, so Castellanos’s true talent might have been better than the stats made it seem last season, or worse than they make it look now. But “small sample” isn’t the only explanation for the old negatives or new positives on his player page. Prior to 2014 spring training, the 23-year-old, who played shortstop as an amateur, hadn’t appeared at third since July 2012, when he was in Double-A. With Miguel Cabrera manning third in the majors in 2012 and 2013, Detroit tried Castellanos in the outfield corners so that his path to the big leagues wouldn’t be blocked. But when the Tigers traded Prince Fielder to Texas after 2013 and moved Cabrera back to first base, they also asked Castellanos to return to his old position, where he’d lost a lot of potential repetitions.

“Last year, everything was brand new,” Castellanos said. “All the fields were brand new. The players were brand new. How our pitching staff attacked hitters was brand new. I had to learn that all on the fly, while learning a new position. So the game definitely got fast for me a little bit over there sometimes.”

At the end of last season, the Tigers told Castellanos that they wanted him to increase his range.

While Castellanos says there’s no substitute for in-game action, he did what he could over the offseason to prepare for his sophomore season, trying everything from running routes like an NFL receiver to taking fungoes from the pitcher’s mound to hone the quick reactions required at the hot corner. He spent the winter working with a trainer at Ultimate Sports Institute in Weston, Florida, focusing on plyometrics and drills designed to make his first step more forceful and lengthen his lateral range. He also traveled to Texas to train with Tigers defensive coordinator Matt Martin and practiced extensively with Tigers first-base coach Omar Vizquel. “He had a great offseason, showed a lot of desire to get better,” Martin said. “And he did.”

Castellanos says his experience has allowed him to be more comfortable and made the game seem “slower than last year.” No matter how much they practice, though, players have neurological limits that teams can’t transcend. So to eke extra outs from Castellanos, the Tigers have tried to make his mechanics more efficient. “Whatever his reaction [time] is, it’s going to be,” Martin said. “We can’t really change that that much. But if we put his body in a physically better position, hopefully there’s just less wasted movement. Last year he had a ton of wasted movement.”

Essentially, the Tigers have tried to remove a few frames from a film of Castellanos’s transition from motionless to in motion, fast-forwarding to the point where he actually starts to take steps.

“Sometimes you see a typical third baseman setting up — and this could be in Little League — and they have their head way out in front of their feet,” Martin said. “If you go jogging, your head isn’t way out in front of your feet. Your upper body has to get upright in order for you to move. And so we’re just trying to get [Castellanos] in a better initial position, where it’s just a more athletic setup. … If you’re in an unathletic position to start, your body’s going to naturally get into an athletic position to move. You don’t think about it or anything, but you just don’t really move from an unathletic position. Your body kind of gets a little bit more upright before you go.”

The difference isn’t immediately obvious in this GIF comparing the spray charts of the batted balls Castellanos touched last season and thus far this year.

However, the numbers make the improvement plain. Castellanos made 31 out-of-zone plays all of last season, according to Baseball Info Solutions. This year, he’s already made 22. The biggest difference has been on plays to his right, toward the line, which BIS’s Plus/Minus system said was his biggest weakness last year.

Without knowing those numbers, Castellanos told me the same story the stats did. “I really didn’t feel that comfortable going to my backhand,” he said. “So I would really play toward the line a lot, and that kind of gave up a lot of hits in the hole.” This year, Plus/Minus suggests that his previous biggest liability has become his strength.

According to Martin, addressing a fielder’s deficiency to one side isn’t as simple as moving him toward the place where he’s weaker. “When we position the guys, we’re not so much looking at his strengths, we’re just looking at what our pitcher does and what the opposing hitter does,” Martin said. “So we wouldn’t position to compensate for one of his deficiencies.” However, the Tigers, who’ve already shifted almost as many times in 2015 as they did all last season, may have improved their positioning overall. And Castellanos has improved his anticipation on his own. “Now since I’ve played against these hitters more, I’m more familiar with them, so I’m more familiar with how they hit the ball,” he said. “Guys who I can cheat toward the line with, and guys who I should actually step over in the hole with.”1

Inside Edge assigns a difficulty rating to every fielding opportunity, applying one of the following six classifications to each play:

Castellanos has come up empty in five chances to make a “remote” play — thus far, those plays are the province of elite third basemen like Josh Donaldson, Manny Machado, Nolan Arenado, and others of their ilk — but he’s made major improvements in the four easier categories, moving toward the top range in each one.

When I asked him for examples of plays he’s completed this year that he might not have made last season, Castellanos mentioned the catch he made in Oakland’s expansive foul territory last week. By the time the camera turns to him in the replay, he’s already racing out of the frame.

He also cited two diving stops from earlier in the season, one on the road to rob Ryan Raburn and another at home against Jose Abreu:

Both Martin and Castellanos are quick to acknowledge that the third baseman could be better, and that he still suffers from occasional lapses. But Martin is pleasantly surprised by Castellanos’s progress. “He shows flashes right now, and he’s shown range,” Martin said. “He’s shown some stuff that we just didn’t think was in there.” After last season, neither Tigers fans nor the team could be confident that Castellanos had the skills to stick at third. Now, Martin has become a believer. “He’s demonstrated that he can do it,” Martin said. “Now he just has to follow through and become more consistent.”

At this point, Castellanos’s bat might be a bigger question: As a rookie, he was close to a league-average hitter, but he’s hit only .228/.275/.364 in 200 plate appearances this season. The optimistic spin is that the better his glove gets, the less potent his bat has to be to stay in the lineup. And for Castellanos, the positive reinforcement has come from sources with more cachet than coaches or media members. “The best compliment that you can get is when a pitcher compliments you, because you want them to want you to be behind them,” Castellanos said. “I’ve had a couple pitchers just come up and say, ‘Man, you look night-and-day better over there.’ So it’s definitely a confidence booster.”

Castellanos says he doesn’t look at his stats. But if he did, the difference between what they looked like last season and what they look like today might be almost as big a confidence booster as a compliment from David Price.

Thanks to Daren Willman of Baseball Savant for spray-chart assistance.

The Mighty 14: A Requiem for Those Who Didn’t Make the Stanley Cup Final