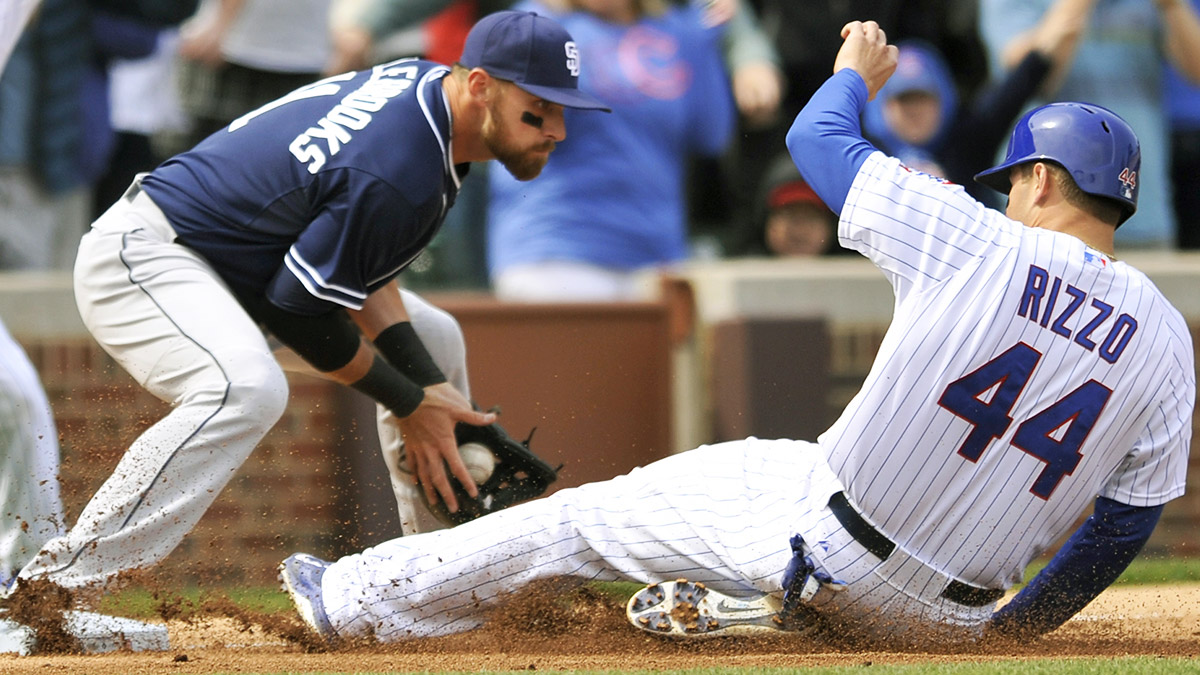 That’s what I thought of when I realized that the Cubs’ Anthony Rizzo has stolen eight bases through 37 games — a 6-foot-3, 240-pound power-hitting first baseman bearing down on second base with the inertia of time itself. Small-sample-size fluke or not, Rizzo’s newfound lust for stolen bases is notable, because his previous career high was six, and he tied that before the end of April.

What’s more, he’s not the only hitter with monster power who’s taking liberties on the bases this season: Paul Goldschmidt and Todd Frazier, whom have been opportunistic if not Hendersonian base stealers in the past, have six apiece. George Springer, the least subtle player in baseball, has been let off the leash to the tune of 10 stolen bases. And Mike Trout, who simply plays by different rules than everyone else, has seven.

Some of that drop-off stems from teams being more conservative, but base stealers are also getting more efficient. The aggregate success rate climbed from 66.3 percent in 1993 to 72.8 percent last year,1 and the five most efficient base stealers in major league history (minimum 100 attempts) are all active.

One of the characteristics of the past five years or so of baseball has been the marked decline of home runs, and indeed of offense in general. Taken in combination with the decline in base stealing, it’s meant we’ve seen one type of player all but disappear: the 30-30 man.

We think of someone like Springer, Eric Davis, or Matt Kemp — a big but slim and athletic-looking man — as the archetype of the 30-30 player, but a look at the list shows that as recently as 15 years ago, big men like Rizzo had a green light on the bases as well. The first 40-40 season belonged to 6-foot-4, 240-pound Jose Canseco. Dante Bichette went 30-30 once, as did two first basemen: Joe Carter and Jeff Bagwell, who did it twice.

Nowadays, though, that seems impossible. First of all, it’s harder to hit home runs, and some of that’s probably got to do with the fact that it’s no longer an open secret that half of MLB is using Ivan Drago’s training staff. But pitchers are also a lot better today. Strikeouts are up to astronomical levels; baseball topped an average of six strikeouts per team per game for the first time in 1994, then seven in 2010, culminating in last year’s all-time high of 7.7. Players the size of Jacoby Ellsbury and Jimmy Rollins don’t hit 30 homers a year anymore. In order to hit 30 home runs, a player needs to either have the strength of a bison or the hand speed of a martial artist.

And in today’s game, guys like that might have to be too big to also have top-notch acceleration. After taking a lead, a baserunner only runs about 80 feet when he steals a base, and he has to start and stop in an instant. The whole process takes less than four seconds, and as fastballs get faster and catchers’ pop times drop, the margin for error disappears.

It’s a question of physics: It takes a lot more force to get Goldschmidt going than it does to jump-start Billy Hamilton. Any smart player can catch pitchers by surprise a few times a year — Albert Pujols has roots and branches and even he’s stolen 10 or more bases three times — but he won’t get to 30 that way.

Canseco is the heaviest player to go 30-30. Trout, at 235 pounds, is second. (Though Baseball-Reference lists Sammy Sosa at 165, so some of the guys on the list might have put on some weight later on.) The only 245-pound player to have stolen even 20 bases in a season is Jason Heyward.

All of this makes it look fluky that Rizzo has run around like he’s being chased, and Goldschmidt’s six steals look like the busy end of a normal-ish six weeks. (Though Trout, as I said before, plays by his own rules.) Which is a pity, because for all the bad things we associate with turn-of-the-century baseball, the golden age of 30-30 men was a ton of fun.